Comments (0)
Add to wishlist Delete from wishlist
Cite this document
Summary
This essay analyzes the National Labor Relations Act (NLRA), which was enacted in the year 1935 forms the basic stature on labor relations in the United States. The act has got provisions that govern the way employers relate to their employees and their labor organizations in the private sector…
Download full paper File format: .doc, available for editing
HIDE THIS PAPERGRAB THE BEST PAPER94.6% of users find it useful 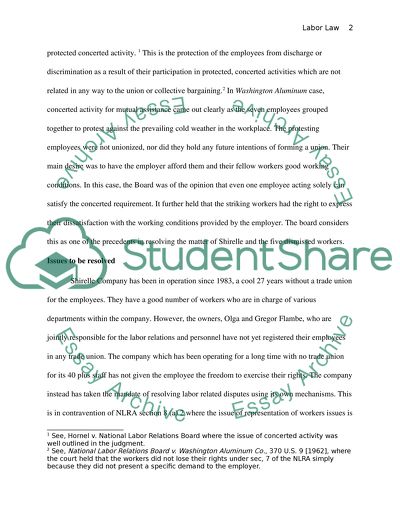 Download file to see previous pages This essay discusses that the same act was held in a ruling made by the Sacramento County Superior Court in Ralphs Grocery Co. v United Food and Commercial Workers Union Local 8. The union agents had peacefully staged a picket for five days a week, eight hours per day on the sidewalk apron of Ralph store, which is a private property. They walked back and forth in front of the store’s doors, waving placards and handing out flyers. This was meant to discourage people from shopping in the shop on the ground that its employees were not unionized.
The picketers ignored Ralph request to relocate to a distance away from the store. This went on for almost nine months prompting Ralph to file a complaint about trespass against the union in Sacramento County Superior Court. The grocery shops the capability to request an injunction against the protesters who were trespassing in front of its stores in the name of picketing.
The board seeks compliance with provisions of NLRA, especially in sections 7 and 8. It orders Shirelle Company to reinstate the five dismissed workers, start collective bargaining process with the workers and recognize the union as the legal representative body of the employees. The National Labor Relations Act of 1935 protects the welfare and interests of both the unionized and the non-unionized workers. The Board, therefore, holds that the employees in Shirelle Company are protected by the Act and the company has no option but to comply with the relevant provisions concerning staff welfare....
Their main desire was to have the employer afford them and their fellow workers good working conditions. In this case, the Board was of the opinion that even one employee acting solely can satisfy the concerted requirement. It further held that the striking workers had the right to express their dissatisfaction with the working conditions provided by the employer. The board considers this as one of the precedents in resolving the matter of Shirelle and the five dismissed workers. Issues to be resolved Shirelle Company has been in operation since 1983, a cool 27 years without a trade union for the employees. They have a good number of workers who are in charge of various departments within the company. However, the owners, Olga and Gregor Flambe, who are jointly responsible for the labor relations and personnel have not yet registered their employees in any trade union. The company which has been operating for a long time with no trade union for its 40 plus staff has not given the employee the freedom to exercise their rights. The company instead has taken the mandate of resolving labor related disputes using its own mechanisms. This is in contravention of NLRA section 8 (a) 2 where the issue of representation of workers issues is placed under employee led unions, and not company dominated labor organizations. In the Electromation case, the electric company had requested the employees to form committees to deal with their concerns, knowing very well that the committees dominated by the employer do are in contravention of the National Labor Relations Act. In the Electromation, Inc v. NLRB, 35 1148 [1994], the court found out that the initial creation, the structure, and the administration was considerably under the control of the ...Download file to see next pages Read More
Share:
Tags
Cite this document
(“Labor Law And National Labor Relations Essay Example | Topics and Well Written Essays - 3500 words”, n.d.)
Retrieved from https://studentshare.org/law/1394061-labor-law-national-labor-relations

CHECK THESE SAMPLES OF Labor Law And National Labor Relations

In th...
8 Pages (2000 words) Case Study
sponsored ads
Save Your Time for More Important Things
Let us write or edit the essay on your topic "Labor Law And National Labor Relations" with a personal 20% discount.
GRAB THE BEST PAPER

Let us find you another Essay on topic Labor Law And National Labor Relations for FREE!