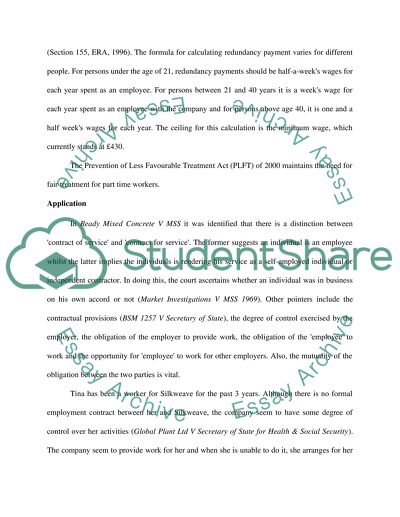 Download file to see previous pages The main legal pointers to analyse include whether Tina qualified for protection as an employee and whether the dismissal was fair or not as well as the question of whether she experienced discrimination or not. Principles According to Section 1 (2) of the Employment Rights Act (ERA) (1996), a person categorised as an employee has rights and the termination of his appointment must come with some degree of sensitivity. Dismissals can only be carried out in cases where the employee is at fault in relation to some key legal indicators (Kelly, 1997). In a case where the employee's appointment is to be terminated because his or her contribution is not required, that situation must be categorised as a 'redundancy' (ERA 1996). Terminations require at least 1 week notice (Section 134 ERA, 1996). The basis for the termination must be reasonable (86, ERA, 1996). In the case of a redundancy, there must be some redundancy payments made to the affected employee (Section 135, ERA, 1996). The payment is required for people who have worked for at least 1 years for the same employer (Section 155, ERA, 1996). The formula for calculating redundancy payment varies for different people. For persons under the age of 21, redundancy payments should be half-a-week's wages for each year spent as an employee. For persons between 21 and 40 years it is a week's wage for each year spent as an employee with the company and for persons above age 40, it is one and a half week's wages for each year. The ceiling for this calculation is the minimum wage, which currently stands at ?430. The Prevention of Less Favourable Treatment Act (PLFT) of 2000 maintains the need for fair treatment for part time workers. Application In Ready Mixed Concrete V MSS it was identified that there is a distinction between 'contract of service' and 'contract for service'. The former suggests an individual is an employee whilst the latter implies the individuals is rendering his service as a self-employed individual or independent contractor. In doing this, the court ascertains whether an individual was in business on his own accord or not (Market Investigations V MSS 1969). Other pointers include the contractual provisions (BSM 1257 V Secretary of State), the degree of control exercised by the employer, the obligation of the employer to provide work, the obligation of the 'employee' to work and the opportunity for 'employee' to work for other employers. Also, the mutuality of the obligation between the two parties is vital. Tina has been a worker for Silkweave for the past 3 years. Although there is no formal employment contract between her and Silkweave, the company seem to have some degree of control over her activities (Global Plant Ltd V Secretary of State for Health & Social Security). The company seem to provide work for her and when she is unable to do it, she arranges for her sister to take over. This means that in practice, Silkweave has a contract of employment with her since she has been solely responsible for the cleaning of Silkweave's premises. It is not likely that Tina provides the cleaning equipment and materials for the cleaning by herself. According to Carmichael V National Power PLC where the employee provides her own materials for the work, she is likely to be self-employed or an independent contractor. However in the case, of Tina, it seems she gets inputs from Silkweave and that makes her more of an employee than an independent co ...Download file to see next pages Read More
Share:
Cite this document
(“Employment law Essay Example | Topics and Well Written Essays - 2750 words”, n.d.)
Employment law Essay Example | Topics and Well Written Essays - 2750 words. Retrieved from https://studentshare.org/law/1403684-employment-law

In th...
8 Pages (2000 words) Case Study
sponsored ads
Save Your Time for More Important Things
Let us write or edit the essay on your topic "Employment law" with a personal 20% discount.
GRAB THE BEST PAPER