Comments (1)
Add to wishlistDelete from wishlist
Cite this document
Summary
The director of the comedy is Rob Reiner and there are two producers, namely; Andrew Scheinman and Nora Ephron, who was also the film’s script writer. There are many characters in the film such as Joe,…
Download full paperFile format: .doc, available for editing
HIDE THIS PAPERGRAB THE BEST PAPER96% of users find it useful 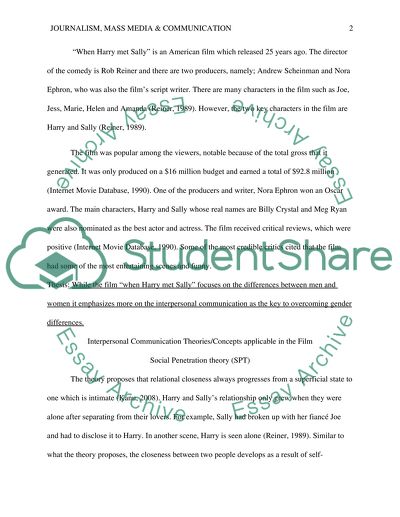 Journalism, Mass Media & Communication Interpersonal Communication on “When Harry met Sally” Film “When Harry met Sally” is an American film which released 25 years ago. The director of the comedy is Rob Reiner and there are two producers, namely; Andrew Scheinman and Nora Ephron, who was also the film’s script writer. There are many characters in the film such as Joe, Jess, Marie, Helen and Amanda (Reiner, 1989). However, the two key characters in the film are Harry and Sally (Reiner, 1989).
The film was popular among the viewers, notable because of the total gross that it generated. It was only produced on a $16 million budget and earned a total of $92.8 million (Internet Movie Database, 1990). One of the producers and writer, Nora Ephron won an Oscar award. The main characters, Harry and Sally whose real names are Billy Crystal and Meg Ryan were also nominated as the best actor and actress. The film received critical reviews, which were positive (Internet Movie Database, 1990). Some of the most credible critics cited that the film had some of the most entertaining scenes and funny.
Thesis: While the film “when Harry met Sally” focuses on the differences between men and women it emphasizes more on the interpersonal communication as the key to overcoming gender differences.
Interpersonal Communication Theories/Concepts applicable in the Film
Social Penetration theory (SPT)
The theory proposes that relational closeness always progresses from a superficial state to one which is intimate (Kanu, 2008). Harry and Sally’s relationship only grew when they were alone after separating from their lovers. For example, Sally had broken up with her fiancé Joe and had to disclose it to Harry. In another scene, Harry is seen alone (Reiner, 1989). Similar to what the theory proposes, the closeness between two people develops as a result of self-disclosure.
Relational Dialectics Theory (RDT)
The RDT theory posits that relationships between people always reflect the tensions existing when people are communicating which usually arises from conflicts (Kanu, 2008). In addition, the theory proposes that relationships focus on the opposing behavior of people. In the film, it is clear that Harry and Sally began to regret because of spending a night together. The characters depicted a sense of guilt in different scenes (Reiner, 1989). As proposed by the theory, there are opposing tendencies because a relationship cannot exist without parties sacrificing their self-rule. Harry said he felt it was a mistake. While Sally agreed to Harry’s opinions verbally, her non-verbal tone in one of the scenes indicated she did not feel it was a mistake. The film confirms that the concept of just being friends and not lovers is not true.
Uncertainty Reduction Theory (URT)
The theory proposes that when there is an interaction between people, the uncertainty between them reduces (Kanu, 2008). The theory presumes that when the relationship is beginning to grow, there are many doubts. Harry and Sally both thought it was wise not to communicate again after being together for one night (Reiner, 1989). There was uncertainty in the way that they would each view each other after that night. The two characters created a conflict. The uncertainty reduced once Harry became persistent to fix the relationship and declared his love.
Conclusion
Right from the beginning, the film confirms that there are those alternatives hat people in heterosexual romance deny. Therefore, the main aspects in the film show the relationship between two people from friendship to romance which makes room for belief that there is need for “otherness”. The film wants to teach the audience that the happily ever after ending is the proof of the effects of interpersonal communication even when it seems out of reach.
Another commendable film for watching would be the Friends with Benefits film. Similar to this film, it depicts the aspect and effects of interpersonal communication.
References
Internet Movie Database. When Harry met Sally [Web page]. Retrieved from http://www.imdb.com/title/tt0098635/
Kanu, A. (2008). Reflections in communication: An interdisciplinary approach. Lanham, MD: University Press of America.
Reiner, R. (Director) (1989). When harry met sally [Web]. Retrieved from https://www.youtube.com/watch?v=0d8rA21aiuU Read More
Share:
Tags
Cite this document
(“Interpersonal communication about When Harry met Sally movie Essay”, n.d.)
Retrieved de https://studentshare.org/journalism-communication/1657744-interpersonal-communication-about-when-harry-met-sally-movie

mo
moriah44 added comment 1 year ago
Student rated this paper as
The topic of "Interpersonal communication about When Harry met Sally movie" was tough to find. I spent ages to find it. Here at StudentShare, I got the most decent example. Many thanks!

...logically and in a mature way when faced with a challenging interpersonal encounter. I discovered that I am hot tempered and as such, I would always find myself in conflicts with other people especially because of misunderstanding. I particularly noted that when angry, I could not listen, have control over my body language, or act assertively. I could not solve any conflict no matter how small it was due to anger. One memorable situation prompted me to think critically about my ability to solve conflicts. I was at home with my two younger brothers. There was power failure in our neighborhood so we could not use our home telephone. Instead, we opted for my cellphone. I am...
3 Pages(750 words)Essay

...? I. Introduction A. Brief summary B Main Theme II. Body A. Friendship and obstacle to romantic relation B. Conflict issue C. Presence of elderly couples’ interviews D. Resolution of the conflict III. Conclusion A. Testing of the idea about friendship B. Filmmaker’s message When Harry met Sally Rob Reiner’s When Harry met Sally is a movie centering two main characters, Harry Burns and Sally Albright. Billy Crystal has played the role of Harry in the film along with Meg Ryan playing that of Sally. The two...
2 Pages(500 words)Book Report/Review

...?Movie Application with Interpersonal Communication Introduction The movie, which I have selected in order to observe and analyze interpersonal conflicts, is ‘My Cousin Vinny’. The reason behind selection of this movie is the association between its story and some of the common interpersonal conflict concepts. The story is based on the prosecution of the two young New Yorkers, Bill and Stan, who were put on trial for the case of murder. In the movie, both of the friends are shown traveling through Alabama where they forget paying for a Tuna can, which they took from a store. The story takes a turn...
4 Pages(1000 words)Essay

...that Y is a certain way, but if X hears from W that W believes that Y is another way, then X is likely to think a different way about Y, and this would be according to the opinion of X. states that McEvoy (1968) states that Harry Sullivan also saw that the juvenile era in a person’s life is important, as far as forming interpersonal relationships. Sullivan (1937) further states that culture is mediating on an individual, and that one’s individual personality would not be formed without it. Or, as he might state, the deficits and pluses that one has in one’s environment dictate how one’s personality is formed. The larger culture is influential, along with one’s microcosm of human...
6 Pages(1500 words)Research Paper

...of the two characters. The relationship develops further and to its logical conclusion when the couple separates itself into a unit separate from the society. This happens when they move into the space that is designated as the facade. In this stage, the characters are aware of those aspects of the other party that they themselves are aware of without the society being so (Luft; Reiner). Harry’s assertion that men and women cannot be friends contradicts the models that have been discussed as not all relationships necessarily progress through the given steps. Apart from this, it is also regressive as it seeks to build barriers which have been broken down by decades of feminism. Works...
3 Pages(750 words)Essay

...Lopez used tact-based empathic words to diffuse the hurt felt by the losing contestant of the television broadcast. The broadcast is the popular American Idol show. Jennifer Lopez showed compassion for the losing contestant. Lopez was crying when she tactfully delivered the heart-breaking news to Jennifer’s favorite contestant. Tact-based interpersonal communication is a complex challenging activity (Solomon 4). Moreover, the interpersonal communication category is grounded on incorporating the personal touch to each communication activity. Communication between lovers falls under this category....
4 Pages(1000 words)Essay

...clearly represents who she is at that point of time. It presents the story of ten years down the line when Sally had a break up with her boyfriend and Harry’s wife left him and they again become best friends. Mark Knapp's 10 stages of Relational Development and the movie Harry Met Sally: To analyze the relationship development, Mark Knapp discussed10 different stages associated with it. Adler and Rodman (1993) in their book discussed about all this stages. Although it is not an interpersonal theory but still according to his concept the ten stages of interpersonal...
5 Pages(1250 words)Movie Review

When Harry Met Sally: An Examination of the Relationships between Men and Women

...Mean Girls: Interpersonal Communication Interpersonal Communication: Movie Based Research andAnalysis Paper Introduction Mean Girls is a movie that revolves around a group of mean girls, their plastic life, and the manner in which their relationships take form, develop and change over time. The major characters in this movie are Cady Heron, Regina George, Karen Smith, Gretchen Wieners, Janis Ian Dyke, Damian, Aaron Samuels, Mr. Duvall, and Ms. Norbury. Regina George, Karen Smith and Gretchen Wieners make up “the Plastics”, a group of highly famous and popular girls that re mean to other people. Cady Heron, the new...
6 Pages(1500 words)Research Paper
sponsored ads
Save Your Time for More Important Things
Let us write or edit the essay on your topic "Interpersonal communication about When Harry met Sally movie" with a personal 20% discount.
GRAB THE BEST PAPER

Let us find you another Essay on topic Interpersonal communication about When Harry met Sally movie for FREE!