Comments (0)
Add to wishlistDelete from wishlist
Cite this document
Summary
The review “What We Talk About When We Talk About Love?” discusses the adaptation of a famous story "Why don’t you dance?" written by Raymond Carver and believes that the film is weak and inferior to the source in the heat of passion and persuasiveness despite the minimalist style of the writer…
Download full paperFile format: .doc, available for editing
HIDE THIS PAPERGRAB THE BEST PAPER91.9% of users find it useful 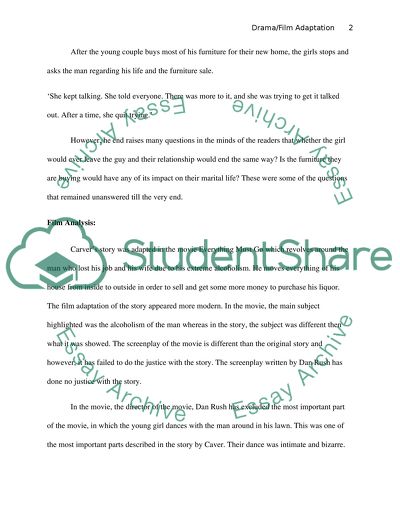 Film Adaptation Analysis of ‘Why Don’t You Dance’ Introduction: ‘Why don’t you dance?’ is an excellent masterpiece written by Raymond Carver. The main theme of the story revolves around love, bonding and relationships. Raymond Carver has skillfully highlighted the most delicate subject of relationship in his short story, why don’t you dance which was first published in 1977.
Carver is known for his minimalistic writing which can be read anywhere, anytime without tying the reader with the story for so long. The main theme of this story highlights the delicacy of relationships. Like in majority of Carver’s stories, the characters are simple and create a spell-bounding effect on the minds of the reader. In this short story, Carver has never named his characters. The characters remain as, ‘the man’, ‘the girl’, and ‘the boy’.
The story revolves around a man who has emptied his entire house in his front lawn after getting out of a broken relationship. It seems like he is trying to get out of the memories of his past and taking a new fresh start for a new life. He arranges everything outside of his house with a thought that, ‘no different from how it was when they were inside.’
His action attracted the people to slow down their cars and stare at the lawn for a minute but it finally got the interest of a young couple who thought this as a ‘backyard sale’. Later, the young couple ends up in getting drunk with the man dancing merrily around his yard. Carver has never highlighted or discussed any of his characters getting drunk or getting high in his previous stories. However, this effort adds uniqueness in the story that the young characters got drunk and what made them to stop by his lawn, when everyone else was least interested?
After the young couple buys most of his furniture for their new home, the girls stops and asks the man regarding his life and the furniture sale.
‘She kept talking. She told everyone. There was more to it, and she was trying to get it talked out. After a time, she quit trying.’
However, he end raises many questions in the minds of the readers that whether the girl would ever leave the guy and their relationship would end the same way? Is the furniture they are buying would have any of its impact on their marital life? These were some of the questions that remained unanswered till the very end.
Film Analysis:
Carver’s story was adapted in the movie Everything Must Go which revolves around the man who lost his job and his wife due to his extreme alcoholism. He moves everything of his house from inside to outside in order to sell and get some more money to purchase his liquor. The film adaptation of the story appeared more modern. In the movie, the main subject highlighted was the alcoholism of the man whereas in the story, the subject was different then what it was showed. The screenplay of the movie is different than the original story and however, it has failed to do the justice with the story. The screenplay written by Dan Rush has done no justice with the story.
In the movie, the director of the movie, Dan Rush has excluded the most important part of the movie, in which the young girl dances with the man around in his lawn. This was one of the most important parts described in the story by Caver. Their dance was intimate and bizarre. This entire part in story highlights that fading spark between the young couple which marked the end of another relationship even before they tied the knot.
The cast of the movie is comparatively good with Will Ferell in the leading role and Rebecca Hill playing the role of the young lady along with Michael Pena in the character of the young guy. The movie was released in 2011. However, the movie has failed to inspire the audiences as compare to the story. The movie lacks the depth of emotions that one cannot feel in the movie due to lack of skilful direction. But one can sure understand the intensity of emotions from the words of Carver.
Work cited:
Carver, R. Why Don’t You Dance? What We Talk About When We Talk About Love (1977)
Rush, D. Everything Must Go. (2011) United States Read More
Share:
Tags
Cite this document
(What We Talk About When We Talk About Love Movie Review, n.d.)
What We Talk About When We Talk About Love Movie Review. Retrieved from https://studentshare.org/visual-arts-film-studies/1594704-dramafilm-adaptation-essay

“What We Talk About When We Talk About Love Movie Review”, n.d. https://studentshare.org/visual-arts-film-studies/1594704-dramafilm-adaptation-essay.
Comments (0)
Click to create a comment or rate a document

Should we still talk about a digital divide

...are budgeted for it. Other people can use computers but the level of understanding with regards to the benefits of the available services is low. For example, few people in the less developed economies know about online business. Even in the developed economies, studies show that less than 40% of people are able to fully utilize the internet in commercial transactions (Zittrain 2009). Some of the websites need high literacy skills for anyone to comprehend what they are all about. Websites need to be user friendly to the user groups with low literacy skills, for example through offering guidelines with regards to the access and utilization of information. Some of the websites contain information that is...
12 Pages(3000 words)Essay

The Wasp Factory and We Need to Talk About Kevin

...(2009; p. 179), these are some of the contributions that parents often initiate towards spoiling their children. Some of the cited poor parenting traits in the novel “We Need to Talk about Kevin” is the father siding with his some in most cases even when the son is on the wrong. Moreover, Frank‘s father cheats him thereby instilling some ill behaviours in him; therefore, Cuddon and Habib (2013; p. 251) state the lack of unity and poor parenting traits portrayed by these two father is common among the contemporary families thereby leading to ill behaviours among children in the society; hence, leading to” the disintegration of the family unit is to blame for the increase...
6 Pages(1500 words)Coursework

What we talk about when talking about love - Raymond Carver

...Book Report/Review, English Literature ic and Modern) What we talk about when talkingabout love-Raymond Carver Introduction Raymond Carver has penned an interesting story titled “What We Talk About When We Talk About Love”. The theme of the story is not something profound. The issues relate to the day to day life of men and women. The story conveys messages interconnecting strategic dialogues with small gestures and charming. Ordinary settings are used to communicate broad themes. The characters make sincere attempts to...
4 Pages(1000 words)Book Report/Review

...brothers. Two of my eight brothers have wives, as well as two of my three sisters are married. While bringing us up, my parents instilled in us the concept of brother hood. I together with my siblings, we love and respect each other. The love amongst us has contributed to a great extent on the manner in which we usually help each other when we are in trouble. It is always my wish and desire to be near my siblings whenever they are facing difficulties in their lives. This is a behavior that I also extend to my friends. I usually view my friends as my brothers, and on this note, the manner in which I treat my siblings, is the same as the...
3 Pages(750 words)Essay

...Traffic Jams Insert Here Insert Your Affiliation Here Traffic Jams A man-made situation that is considered normal and routine nowadays aptly describes what a ‘traffic jam’ actually is. One never blinks an eyelid at the phrase though it was an unheard of scenario during the early parts of the Twentieth Century, when motor-driven vehicles as well as roads were scarce. The present day dependence on engine driven vehicles of all sorts and sizes and the enthralling experience of rushing down the road at breakneck speed have combined with the capability of buying one’s own transport to spew a huge number of fast moving juggernauts on the road, vying with each other to hog the road space. It is therefore not surprising that one...
2 Pages(500 words)Essay

...Can We Talk”? Indeed the role of communication can never be underestimated; it does play a very big role in marriage. For there to be proper and effective communication, the two parties have to open up and freely share their feelings without being worried about being judged. It is called self disclosure. This is a well thought out article and in fact very timely. Many, me being included, can relate to this article in so many ways. First of all the whole aspect of self disclosure is very important in any form of relationship. Especially in marriage where, at times, communication normally breaks down leaving the two parties very bigger with each other. Failure to have self disclosure, the two parties will develop some internal anger... and...
1 Pages(250 words)Research Paper

...Compare Raymond Carver’s “What We Talk about When We Talk about Love” to Homer’s “The Odyssey.” Introduction Both Raymond and Homer are talking about the issues revolving around love. Both authors utilize the characters in the stories to pass their vital message on love. Furthermore, they employ diverse styles to portray what people go through as they satisfy their intrinsic romantic urge. They both concur on the dangers brought by love. In addition, they also agree on tough times people are willing to go through to...
2 Pages(500 words)Essay
sponsored ads
Save Your Time for More Important Things
Let us write or edit the movie review on your topic "What We Talk About When We Talk About Love" with a personal 20% discount.
GRAB THE BEST PAPER