Comments (0)
Add to wishlistDelete from wishlist
Cite this document
Summary
The ancient story concerning the great floods that are told in the bible is believed to have originated from the region of the ancient Sumerians known as Mesopotamia. The Sumerians had settled in the Mesopotamia region and they were considered to have a great impact in the…
Download full paperFile format: .doc, available for editing
HIDE THIS PAPERGRAB THE BEST PAPER95.6% of users find it useful 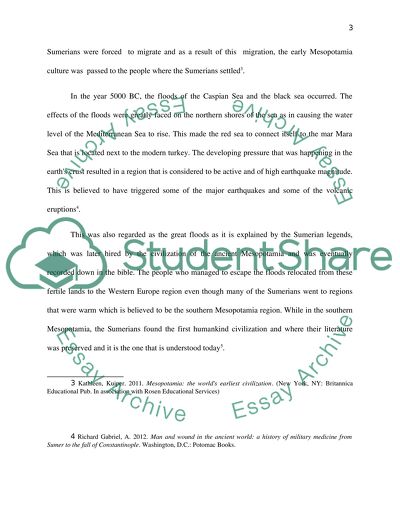 Extract of sample "Natural Disasters and the Ancient Sumerians"

NATURAL DISASTERS AND ANCIENT SUMERIANS The ancient story concerning the great floods that are told in the bible is believed to have originated from the region of the ancient Sumerians known as Mesopotamia. The Sumerians had settled in the Mesopotamia region and they were considered to have a great impact in the subsequent civilization of the region. Different version of narratives has been said concerning the floods. Most of these stories also try to solve the riddle concerning the origin of the Sumerians as they were forgotten until the nineteenth century, when their deciphered and writings were discovered1.
These different legends and myths also involved the data concerning the location and the duration the last great floods are perceived to occur as it is the one that caused the rise and development of these narratives. Even though there is no existing evidence concerning the enormous floods that is believed to have covered almost every mountain in the world, only many narratives from all over the world that is told concerning the great floods which was the major disaster that was faced by the people of Sumerian2.
The floods are considered to have destroyed the human race in the unsociable past and which resulted in the map of the world to change in the process. As a result of the floods, the Sumerians were forced to migrate and as a result of this migration, the early Mesopotamia culture was passed to the people where the Sumerians settled3.
In the year 5000 BC, the floods of the Caspian Sea and the black sea occurred. The effects of the floods were greatly faced on the northern shores of the sea as in causing the water level of the Mediterranean Sea to rise. This made the red sea to connect itself to the mar Mara Sea that is located next to the modern turkey. The developing pressure that was happening in the earths crust resulted in a region that is considered to be active and of high earthquake magnitude. This is believed to have triggered some of the major earthquakes and some of the volcanic eruptions4.
This was also regarded as the great floods as it is explained by the Sumerian legends, which was later hired by the civilization of the ancient Mesopotamia and was eventually recorded down in the bible. The people who managed to escape the floods relocated from these fertile lands to the Western Europe region even though many of the Sumerians went to regions that were warm which is believed to be the southern Mesopotamia region. While in the southern Mesopotamia, the Sumerians found the first humankind civilization and where their literature was preserved and it is the one that is understood today5.
Of late, many stories have emerged that states that the story of the great floods that was narrated by the Sumerians legendary is contained in the flooding of the black sea basin. Several researches have been conducted in order to determine the possible locations where of the floods and to determine the possible duration when the great floods occurred. The solution that was considered the best indicated that the floods occurred around 5500-5000 BC in the region of the northern black sea. This conclusion was based on all the evidence that is present from the history of geology, mythology and linguistics. The floods are believed to have occurred just before the early appearance of the Sumerians, who lived in Mesopotamia and after they appeared in the region of Eastern Europe6.
Bibliographies
Gabriel, Richard A. 2012. Man and wound in the ancient world: a history of military medicine
from Sumer to the fall of Constantinople. Washington, D.C.: Potomac Books.
Thornton, Brian. 2011. The book of ancient bastards 101 of the worst miscreants and misdeeds
from ancient Sumer to the Enlightenment. Avon, Mass: Adams Media. Kuiper, Kathleen. 2011. Mesopotamia: the worlds earliest civilization. New York, NY:
Britannica Educational Pub. In association with Rosen Educational Services. Read More
Share:
Tags
Cite this document
(“Natural Disasters and the Ancient Sumerians Essay - 1”, n.d.)
Retrieved from https://studentshare.org/history/1643375-natural-disasters-and-the-ancient-sumerians

“Natural Disasters and the Ancient Sumerians Essay - 1”, n.d. https://studentshare.org/history/1643375-natural-disasters-and-the-ancient-sumerians.
Comments (0)
Click to create a comment or rate a document

CHECK THESE SAMPLES OF Natural Disasters and the Ancient Sumerians

Tltos tradition in Hungary: past and present

... have been put under a dreadful spell that has lasted for many years, and this "curse" has manifested itself through the various inter-state wars, misfortunes, and major historic disasters. This curse was supposedly placed when Hungary was converted into Christianity (under King Stephen), and when the followers of the ancient shamanism form of religion were driven out, the latter group had cursed the Christian religion saying that either it would last for only a 1000 years, or it would last forever. The Asian- Sumerian connection theory first came into being in the first half of the nineteenth century, when British, French and German archaeologists working on various sites in Mesopotamia...
16 Pages(4000 words)Essay

...?Running Head: Natural Disasters Natural Disasters [Institute’s Annotated Bibliography for Disaster Why Terrorism is a fabricated disaster, which has always caused severe loss and trauma to the people it affects. It thus makes a very relevant topic to research on. This is because if the research is conducted properly and thoroughly, it could provide findings, which could be useful to several potential users, including experts involved in contingency planning, damage control as well as direct victims of terrorist activities. Another factor that greatly increases the relevance of this topic is the trends of recurring terrorist activities...
4 Pages(1000 words)Essay

...The severe shaking was not the limit of this massive natural disaster but aftershocks, landslides and rock falls also rocked the devastated areas a number of times for several weeks. Land sliding was the main feature of this event and earthquake triggered a band of landslidings along the fault rupture trace. These landslidings of both shallow and deep seated affected the area. They destroyed the roads and structures present at slope regions. These landslides even managed to change the course of the river. Rock falls including both large and small destructed roadways, structures and communities. According to an average 4 million people were left homeless. (USGS, 2011) In widespread collapses of schools,...
8 Pages(2000 words)Research Paper

... 16th November Planning of Natural Hazards and Natural Disasters Introduction The world experiences a variety of natural hazards and disasters every year. These disasters impact negatively on the people, infrastructure, property as well as the wider environment. For instance, the United States alone recorded losses of approximately 1 billion dollars weekly as a result of hurricanes, earthquakes, volcanic eruptions and tornadoes. Regardless of the location of the natural disaster in the world, it is of paramount importance to device means of planning for the natural hazards. Planning systems and techniques ought to be improved considering that the magnitude of some hazards can be altered by the effects of climate change. Planning... for...
7 Pages(1750 words)Essay

...? Natural Hazards and Disasters – Hurricanes Natural Hazards and Disasters – Hurricanes Explain the formation and movement of hurricanes A hurricane is defined as a powerful, rotating storm that forms near the Equator over warm oceans. Often, Hurricane travels from ocean to the coast and on to land, where rain, wind, and huge waves can result to extensive destruction (Cauffman,2006).Hurricane are classified in different categories depending on they strength and destruction. The scale ranges from category one to five. Category 5 is the deadliest of all. Basically, hurricanes start as a collection of tropics storms over the ocean. Moist air and thermal energy from the ocean...
3 Pages(750 words)Essay

...Natural Disasters A comparison between the regions of Los Angeles and Oklahoma 1 Introduction Natural disasters can be a tornado, severe storm, high water, flood waters, wind-driven water, earthquake, landslide, mudslide, snowstorm, or drought. It completely changes the social structure, life of human beings apart from other inestimable miseries It causes damage of sufficient severity and magnitude to warrant hazard mitigation or the use of resources of the federal government, or the state and political subdivisions thereof to alleviate the damage, loss, hardship etc. Nowadays the natural...
5 Pages(1250 words)Essay

...﻿The Natural Disasters Introduction The world has experienced a number of natural disasters in different time periods. These natural disasters range from earthquakes, diseases, insect plagues, tsunami, drought and bushfires among others. Recent natural disasters in terms of earthquakes that have caused devastating losses in the countries where they occurred include the most recent Italy earthquake (2009) and the Chinese earthquake that struck in the year 2008. The recent earthquake disaster took place on 6th April 2009. It was measured at 6.3 on the Richter scale and it caused death to...
7 Pages(1750 words)Essay

...Opinion of Natural Disasters A natural disaster is a major adverse happening resulting from the natural processes of theearth. Calamities such as floods, earthquakes, hurricanes among others are good examples of natural disasters that cause poverty, displacement and even deaths to the affected areas. The danger of natural calamities happening is out of our control as we cannot influence the earth’s movement on its axis. However, we cannot solely blame nature for all disasters as recent research shows that human activities have contributed to the increased occurring...
1 Pages(250 words)Essay

...1. Convergent boundary. Japan. 2. Subduction. Plates involved include the pacific plate, Eurasian plate, and the Philippine sea plate. Subduction occurs when one plate sinks beneath another plate as they converge. The Eurasian plate and the Philippine Sea plate form a convergent boundary as the two move toward each other. In the region under study, the Eurasian plate which carries Japan and its volcanoes thrust over the Philippine Sea plate. The boundary between the plates crack and fracture as the two plates slip past each other in the subduction process. This is the reason there are several faults in the region. 3. 14 mm/year 4. Transform boundary 5. Earthquake, Tsunami, volcanic eruption 6. The people of Japan do not truly...
1 Pages(250 words)Coursework

...Natural disasters Natural disasters Introduction An earthquake is also known as a tremor or a quake and is a consequence of sudden energy release from the Earth’s crust that builds seismic waves. Thus, the seismism, seismic activity or seismicity of a region refers to the form, size and frequency of earthquakes experienced over a certain period of time. Normally earthquakes are determined by use of seismometers observations. The most popular scale on which earthquakes bigger than magnitude 5 recorded for the whole globe are measured is known as on moment magnitude. Nevertheless, majority of earthquakes less than magnitude 5 reported on various seismological observatories...
9 Pages(2250 words)Essay
sponsored ads
Save Your Time for More Important Things
Let us write or edit the essay on your topic "Natural Disasters and the Ancient Sumerians" with a personal 20% discount.
GRAB THE BEST PAPER

Let us find you another Essay on topic Natural Disasters and the Ancient Sumerians for FREE!