Comments (1)
Add to wishlistDelete from wishlist
Cite this document
Summary
This research is being carried out to compare and contrast two ancient Mesopotamian civilizations Sumerians and Babylonians and discuss the accomplishments of the respective civilizations and the distinctive characteristics of the artwork from each culture architecture…
Download full paperFile format: .doc, available for editing
HIDE THIS PAPERGRAB THE BEST PAPER98.6% of users find it useful 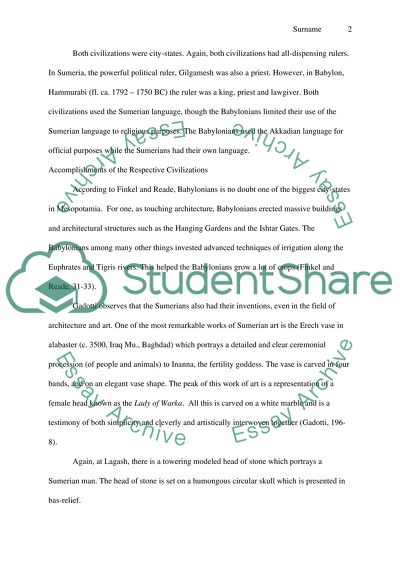 Extract of sample "Babylonians and Sumerians"

﻿Introduction
Mesopotamia refers to the area extant between the Euphrates and Tigris river system and corresponds with the present day Kuwait, Iraq, Turkey, Iran and northeastern part of Syria. Mesopotamia rightly regarded as the cradle of civilization for it played a critical role in the emergence of the Iron and Bronze Age. Again, Mesopotamia included empires such as the Akkadian, Assyrian, Babylonian and the Persian empires. Since these empires all existed in Mesopotamia, they had striking similarities among themselves, yet their identity and autonomy granted them differences, as shall be seen in the ensuing discussion, vis-à-vis the Sumerians and Babylonians.
Similarities and Differences between Babylonians and Sumerians
One of the points of commonality between Sumerians and Babylonians is religion. Babylonians and Sumerians were both highly polytheistic. At some points, as neighboring city states, Babylonians and Sumerians shared the same gods. All these gods were based on the perceptions that people had towards forces of nature. To this extent, both the Sumerians and Babylonians had the god(s) of air, sun, moon, rain and sea. Both civilizations also had towers or ziggurats in the middle of their cities. Sacrifices were offered to the pantheon of gods in Sumeria and Babylon. Nevertheless, in the offering of sacrifice, there is a parting point since the Sumerians offered only crop harvests while the Babylonians sacrificed even their children.
Both civilizations were city-states. Again, both civilizations had all-dispensing rulers. In Sumeria, the powerful political ruler, Gilgamesh was also a priest. However, in Babylon, Hammurabi (fl. ca. 1792 – 1750 BC) the ruler was a king, priest and lawgiver. Both civilizations used the Sumerian language, though the Babylonians limited their use of the Sumerian language to religious purposes. The Babylonians used the Akkadian language for official purposes while the Sumerians had their own language.
Accomplishments of the Respective Civilizations
According to Finkel and Reade, Babylonians is no doubt one of the biggest city-states in Mesopotamia. For one, as touching architecture, Babylonians erected massive buildings and architectural structures such as the Hanging Gardens and the Ishtar Gates. The Babylonians among many other things invested advanced techniques of irrigation along the Euphrates and Tigris rivers. This helped the Babylonians grow a lot of crops (Finkel and Reade, 31-33).
Gadotti observes that the Sumerians also had their inventions, even in the field of architecture and art. One of the most remarkable works of Sumerian art is the Erech vase in alabaster (c. 3500, Iraq Mu., Baghdad) which portrays a detailed and clear ceremonial procession (of people and animals) to Inanna, the fertility goddess. The vase is carved in four bands, and on an elegant vase shape. The peak of this work of art is a representation of a female head known as the Lady of Warka. All this is carved on a white marble and is a testimony of both simplicity and cleverly and artistically interwoven together (Gadotti, 196-8).
Again, at Lagash, there is a towering modeled head of stone which portrays a Sumerian man. The head of stone is set on a humongous circular skull which is presented in bas-relief.
Works Cited
Finkel, I. L and Reade, J. E. “On Some Inscribed Babylonian Alabastra.” Journal of the Royal Asiatic Society, 12.1 (2002): 31 – 46. Print
Gadotti, Alhena. “Portraits of the Feminine in Sumerian Literature.” Journal of the American Oriental Society, 131.2 (2011): 195 – 206. Print Read More
Share:
Tags
Cite this document
(“Babylonians and Sumerians Essay Example | Topics and Well Written Essays - 500 words”, n.d.)
Retrieved from https://studentshare.org/history/1651865-compare-and-contrast-two-ancient-mesopotamian-civilizations-sumeriansbabylonians-assyrianspersians-etc-please-discuss-the-accomplishments-of-the-respective-civilizations-and-the-distinctive-characteristics-of-the-artwork-from-each-cultor-architect

ma
marlene56 added comment 28 days ago
Student rated this paper as
The topic of "Babylonians and Sumerians" was tough to find. I spent hours to find it. Here at StudentShare, I got the most decent example. Many thanks!

CHECK THESE SAMPLES OF Babylonians and Sumerians

Relationship between the subject you have chosen and the Bible

...was generally held by those who lived by the Hebrew Bible. Such theories of the cosmos were shared by the ancient Babylonians and Sumerians. Many of the Hebrew words employed for the earth’s surface, waters of the abyss, and the underworld occur without a definite article. This indicates that these terms were proper nouns, which serves to indicate a mythical background to these concepts (Mills x). Furthermore, the Hebrew Bible has been credited with incorporating exemplary procedures that promote the use of land in a manner that promotes social and ecological justice. The present day emphasis is on individual control, which is has to be supplanted with a new understanding regarding mutuality. Any...
14 Pages(3500 words)Essay

...thousands of years ago. As a one of the greatest contributors to Cuneiform development, the Sumerians developed this early form of civilization writing using pictures. Later the Babylonians and Assyrians adopted the use of Cuneiform as a system of writing. As an ancient form, of writing Cuneiform entailed the use of wooden reeds on pieces of clay that were used to impress shapes on the moist clay tablets evidently in Mesopotamia. This mode of writing used wedged shaped stylus as a means of making impressions on the tablets that were made up of stones, metal, clay, or wax. However, the clay tablets were mainly used, as they were cheap and easily available. On the contrary, the clay tablets tended to be...
7 Pages(1750 words)Research Paper

Evolution of reading and writing

...derives its name from the idea that it used signs that were similar to small wedges. In this form of writing agricultural goods and domestic animals were drawn using conventional signs while wild animals drawing conformed to the distinctive characteristics of each animal. However, a problem developed in this writing especially with the use of sharp tip, which caused detachment of clay fragments. To solve this people employed the use of stylus that impressed straight marks, a factor that greatly altered the resultant figure and made the drawing to lose realism. This form of writing spread to affects many regions in the prehistoric Middle East and many other people that include the Babylonians, Akkadians, Assyrians and...
4 Pages(1000 words)Essay

If the second amendment protects the right to bear arms, can state and federal government strictly limit access to ammunition un

...religious beliefs because of the ziggurats or the terraced temples. 2. AKKADIANS: The Akkadians who were natives of central Mesopotamia, had their own Akkadian writing using the cuneiform. Authors like Ziomkowski and Spielvogel claimed that they invented the stamps and instituted regular postal services and cadastral survey (3;6). Noble (18) said they gave us the first great warlord known to mankind and this was Sargon. 3. BABYLONIANS OR AMORITES: These inhabited lower Mesopotamia or near the Tigris-Euphrates delta. But with the conquest of the Akkadians and the Sumerians, King Hammurabi was able to carve a kingdom that unified almost the whole of Mesopotamia. Hammurabi then established the...
4 Pages(1000 words)Essay

..., their first king who was the servant of the king of Kish became the first conqueror of history. His grandson, Naram-Sin developed unheard-of wealth and power that he declared himself god and built temples to himself. In 2125 B.C.E., the Sumerians established the third dynasty empire on the foundation of the Akkadian empire. In 1792 B.C.E. King Hammurabi created a kingdom to embrace most of Mesopotamia. At 1600 B.C.E., the Babylonian kingdom fell apart by invasions from the Hittites, Hurrians, and Kassites. Ingredients of Civilization in Ancient Egypt and Mesopotamia Ingredients of civilization were found in ancient Egypt and Mesopotamia. Considering the utilization of symbolic communication, in...
6 Pages(1500 words)Essay

Major Contributions Made By Ancient Egyptians And Babylonians To Science

.... It was situated on the Euphrates River about 50 miles south of modern Baghdad, just north of what is now the modern Iraqi town of al-Hillah. The Babylonian civilization was mainly based on agriculture (Babylonia, 2005) The observations of the astrologers, which were meticulously recorded on a nightly basis over many centuries, led to accurate predictions of various astronomical phenomena and the correct calculation of the solar and lunar year. The Babylonian calendar was based upon the lunar year but, thanks to the astrologers knowledge, could be reconciled with the solar year by means of intercalary months. They were probably the first people after the Sumerians to have a calendar....
4 Pages(1000 words)Essay

Natural Disasters and the Ancient Sumerians

...NATURAL DISASTERS AND ANCIENT SUMERIANS The ancient story concerning the great floods that are told in the bible is believed to have originated from the region of the ancient Sumerians known as Mesopotamia. The Sumerians had settled in the Mesopotamia region and they were considered to have a great impact in the subsequent civilization of the region. Different version of narratives has been said concerning the floods. Most of these stories also try to solve the riddle concerning the origin of the Sumerians as they were forgotten until the nineteenth century, when their deciphered and writings were discovered1. These different legends and myths also involved the data concerning the location and the duration the last great floods... are...
2 Pages(500 words)Essay

..., there has been a considerable change in the work, in terms of color, texture, material used and the details engraved within these works. In the traditional context, artists used their work to communicate and to describe their life behavior. For instance, the Sumerians and Babylonians used the work of art to represent their gods, warriors and animals. However, there is adequate evidence that the traditional works of art was rudimentary and lack the flavor that exists in modern art. Notably, there has been a considerable improvement in the work of art, in terms of details, use of color, shape and even in its application. Unlike the shapeless objects that traditional artists formed using clay, today...
6 Pages(1500 words)Admission/Application Essay

...College: Visual Arts and Film Studies In Mesopotamia, cultural exchanges influenced the arts of different peoples. The original inhabitants of the land, Sumerians, had their own cultures and arts. However, since the land had no barriers, other communities and cultures moved into Mesopotamia and introduced their cultures, which influenced the original Sumerian culture. Among the early communities that moved into Mesopotamia are the Babylonians and Assyrians. The Babylonians and Assyrians carried with them their cultures, including their arts. Ultimately, these cultures blended with that of the Sumerians. The evidence of this is in the effect of the...
1 Pages(250 words)Essay
sponsored ads
Save Your Time for More Important Things
Let us write or edit the essay on your topic "Babylonians and Sumerians" with a personal 20% discount.
GRAB THE BEST PAPER

Let us find you another Essay on topic Babylonians and Sumerians for FREE!