Comments (0)
Add to wishlistDelete from wishlist
Cite this document
Summary
I agree with you that Mesopotamians had a lot to contribute to science, government and medicine. Mesopotamians fascinate me with their curiosity for detail and their ease of finding solutions to problems they face or things they do not understand…
Download full paperFile format: .doc, available for editing
HIDE THIS PAPERGRAB THE BEST PAPER98.9% of users find it useful 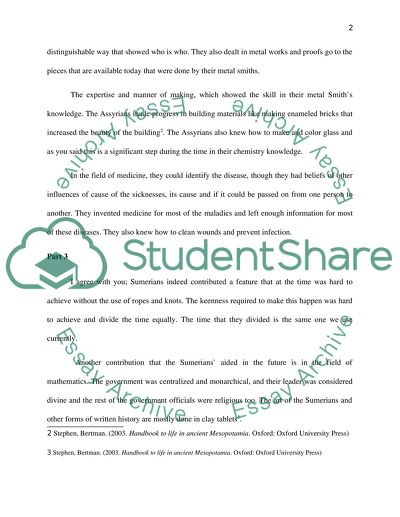 HISTORY Part I agree with you that Mesopotamians had a lot to contribute to science, government and medicine. Mesopotamians fascinate me with their curiosity for detail and their ease of finding solutions to problems they face or things they do not understand.
In science, their contribution to calculating time and the movements of heavenly bodies is the foundation of understanding and study of heavenly bodies. Their attention to balance their accounting is the reason we have accounting. In medicine, they made inventories of different signs and symptoms of a range of diseases that the physicians encountered that piqued their curiosity1.
To be successful, the physicians, who performed operations did that without the patient dying if the patient died then they would also die. The idea is to deliver the patient alive incentive for the physicians to be well respected for their services.
The Mesopotamians had government structure that had councils that debated and weighed on decisions. Art was that of their Gods and their leaders as documented. The Mesopotamians had keenness that is fascinating, and which gave them the necessary devotion and motivation to do what they specialized in, in their various roles.
Part 2
I agree with you, the Assyrian society, indeed made progress in their art making. Considering the facts that they made images of their leaders, the images humanization in a distinguishable way that showed who is who. They also dealt in metal works and proofs go to the pieces that are available today that were done by their metal smiths.
The expertise and manner of making, which showed the skill in their metal Smith`s knowledge. The Assyrians made progress in building materials like making enameled bricks that increased the beauty of the building2. The Assyrians also knew how to make and color glass and as you said this is a significant step during the time in their chemistry knowledge.
In the field of medicine, they could identify the disease, though they had beliefs of other influences of cause of the sicknesses, its cause and if it could be passed on from one person to another. They invented medicine for most of the maladies and left enough information for most of these diseases. They also knew how to clean wounds and prevent infection.
Part 3
I agree with you; Sumerians indeed contributed a feature that at the time was hard to achieve without the use of ropes and knots. The keenness required to make this happen was hard to achieve and divide the time equally. The time that they divided is the same one we use currently.
Another contribution that the Sumerians` aided in the future is in the field of mathematics. The government was centralized and monarchical, and their leader was considered divine and the rest of the government officials were religious too. The art of the Sumerians and other forms of written history are mostly done in clay tablets3.
Their creation story equates that of the bible. The Sumerian knowledge of medicine is very shallow and based on the spiritual aspect of their religion and basic bandaging of wounds. The Sumerians were a very interesting community, their culture; education writing forms were clay tablets for those that were well off and papyrus for those that were middle and poor class. The divisions based on classes that are still there in this time interests me as it has been there since the Sumerian time.
Bibliography
Bertman, Stephen. 2003. Handbook to life in ancient Mesopotamia. Oxford: Oxford University
Press. Read More
Share:
Tags
Cite this document
(“Sumerian, Assyrian and Mesopotamian contribution Essay”, n.d.)
Sumerian, Assyrian and Mesopotamian contribution Essay. Retrieved from https://studentshare.org/history/1666424-sumerian-assyrian-and-mesopotamian-contribution

CHECK THESE SAMPLES OF Sumerian, Assyrian and Mesopotamian contribution

...but will also help them grow and enjoy customer life time value only if implemented carefully and properly. Evaluation of CRM contribution in order to gain customer retention in the UK banking industry – A case study of Barclays Bank Richmond branch 1 INTRODUCTION Approaching customers and selling company’s offerings is not a new concept; what is new is the change in focus. Previously, companies tend to focus on selling their products and services to the customers irrespective of the fact that whether the solutions offered are required or not and honestly there was no need either because there were quite a few alternatives available which makes the sales of any product easier. However, with the change in time where...
81 Pages(20250 words)Dissertation

...? Coventry's contribution to transportation Part Overview Coventry is home to distinguished and world renowned car brands produced by British based firms. The brands manufacture a variety of respected and desirable car models for the world market. Coventry got to be the British cycle and motor industry’s birthplace. The city has got over 100 years of automotive history (Tom & David 2000, p. 18). Major car brands such as Jaguar, Rover, London Taxi International and Triumph became manufactured in Coventry. The automotive industry in the United Kingdom- UK dates back to the end of the 19th century. During the 1950’s, the car manufacturing industry in the UK became the second largest in the globe falling behind to the United...
5 Pages(1250 words)Essay

... Section/# Human Resources Questions and Answers It has been suggested that trade unions constrain the strategicchoices of multinationals; however, there is always two sides to a story – discuss. To disregard the level and extent to which trade unions affect and/or constrain a given multinational companies choice with respect to a given market or region of production should not be understated. However, such a determinant is but one concern among dozens that multinationals take into account when choosing whether to engage with a given economy within a given nation (Rubin 2012). Moreover, due to the highly nuanced decision factors that help guide the growth and development of international business, one can safely assume... Section/# Human...
4 Pages(1000 words)Essay

...? ANCIENT MESOPOTAMIAN ARCHITECTURE The art and design of construction, also known as architecture, refers to building of structures. Engineers design and come up with appealing and relevant structures. It happened from time immemorial and today, more structures are in place. Traditionally, considerable design and building was witnessed in Mesopotamia. Mesopotamia is the land between two rivers, Tigress and Euphrates. The Egyptians ways of constructions stand up to be remembered in the minds of historians. They came up with fascinating structures1. These were the houses, churches, the kings’ palaces and several other structures. These structures were mostly built for the government, royal families, and the noble class. Focusing... ...
5 Pages(1250 words)Admission/Application Essay

... Why did writing develop in Sumerian civilization What uses was it put to How did those uses changeover time Why is record-keeping important for western civilization The Sumerian civilization progressed in an advanced manner to build towards structured Monarchy. The administrative control of every city was properly built and the hierarchy of rule developed in the form of consistent and uniform roles over this time period. The administrators and the rulers, in the form pf Priests and King Priests, took up their roles to survey land, and to make arrangements to properly and equally divide any surplus supplies of food among cities and people. Furthermore, there was fast growth in the development of educational services that required... the...
13 Pages(3250 words)Essay

...of peasants, conquered one civilization after another – the Medes, Egyptian, the Assyrians, and even the Greek paid tribute. The conquered civilizations greatly influenced the Persians – their architecture, customs, their language – but there remains the fact that the Persian has never mastered to write their own tongue. Even during the peak of the empire, writing was in Aramaic and is performed only for the conduct of governing the vast conquered lands. (Breasted, p. 183) Civilization and Writing As writing, for some, is considered as prerequisite for civilization, it is helpful to define its very concept and determine exactly what writing is worth in this context. Thomas Meadows devoted a large part of his book about...
6 Pages(1500 words)Essay

Analysis of the Art and Architecture of Mesopotamia

...Insert Analysis of the Art and Architecture of Mesopotamia Art of Mesopotamia Mesopotamia’s art has withstood its prominence through archaeological history, from ancient hunter-gatherer communities that existed during the Bronze Age societies of the Sumerian, Akkadian, Assyrian, and Babylonian kingdoms. These kingdoms were eventually substituted in the Iron Age. This replacement was effected by the Neo-Babylonian and Neo-Assyrian reigns. Widely believed to be the origin of civilization, the society brought vital cultural developments, encompassing the earliest examples of literature. For instance, a bas relief symbolizing Naram-Sin was reportedly traced to Diyarbakır, in what became of...
2 Pages(500 words)Essay

...as the contribution of different governments and persons in the advancement of accounting systems. Accounting in Mesopotamia The double entry system of accounting originated in Assyrian, Chaldaean, and Sumerian civilizations at the home of the oldest commerce records. Financial strength of farmers coupled with increasing trading activities led to the expansion of businesses among communities residing in and around Mesopotamian valley. During this period, Babylonian became famous for the language of politics and business that spread to all the areas of Near East. Leaders held most domestic animals and land. They gave extensive importance to record-keeping practices....
6 Pages(1500 words)Research Paper

Let us find you another Essay on topic Sumerian, Assyrian and Mesopotamian contribution for FREE!