Analysis of the Art and Architecture of Mesopotamia - Essay Example

Comments (0)
Add to wishlistDelete from wishlist
Cite this document
Summary
The author examines Mesopotamia’s art which has withstood its prominence through archaeological history, and Mesopotamia’s structural designs which include several unique cultures and lasting between the 10th millennium BC and the 6th century BC when the oldest structures were erected. …
Download full paperFile format: .doc, available for editing
HIDE THIS PAPERGRAB THE BEST PAPER95.9% of users find it useful 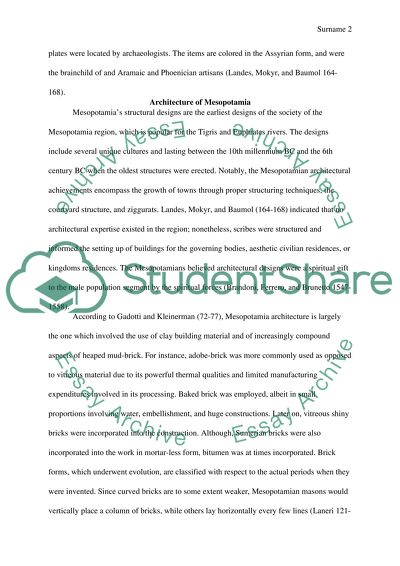 Extract of sample "Analysis of the Art and Architecture of Mesopotamia"

Insert Analysis of the Art and Architecture of Mesopotamia Art of Mesopotamia Mesopotamia’s art has withstood its prominence through archaeological history, from ancient hunter-gatherer communities that existed during the Bronze Age societies of the Sumerian, Akkadian, Assyrian, and Babylonian kingdoms. These kingdoms were eventually substituted in the Iron Age. This replacement was effected by the Neo-Babylonian and Neo-Assyrian reigns. Widely believed to be the origin of civilization, the society brought vital cultural developments, encompassing the earliest examples of literature. For instance, a bas relief symbolizing Naram-Sin was reportedly traced to Diyarbakır, in what became of the contemporary Turkey. Additionally, Assyrian art design was different from the structure of Babylonian art, which eventually became the main modern designs in Mesopotamia, resurfaced during the 1500 BC and prevailed until the end of Nineveh reign in 612 BC. Generally, the main aspect of Assyrian art design was the chopped stone relief of polychrome structure that was used to festoon imperial arts. The clearly delineated reliefs symbolized royal affairs, mainly hunting and organizing for successful battles.
The art predominantly captures animal designs, especially a horse and lion; these were elegantly portrayed in the art in a comprehensive manner (Begemann et al 135-169). Additionally, though, important personalities are fairly rigid they are also benignly represented, as in victorious scenes of operations, wars, and individual military contribution. Assyrian reliefs that apparently popular include the lion-hunt sculptures depicting Assurbanipal of 7th century BC and Assurbanipal II of the 9th century BC (Ulrichsen 349-377). Both carvings are archived by the British. Guardian nature composed of lions and other flying wildlife with hairy human face. The models were presented in incomplete curves for strong regal entrances. It is notable, though, that Nimrud-carved elephant tusks and bronze plates were located by archaeologists. The items are colored in the Assyrian form, and were the brainchild of and Aramaic and Phoenician artisans (Landes, Mokyr, and Baumol 164-168).
Architecture of Mesopotamia
Mesopotamia’s structural designs are the earliest designs of the society of the Mesopotamia region, which is popular for the Tigris and Euphrates rivers. The designs include several unique cultures and lasting between the 10th millennium BC and the 6th century BC when the oldest structures were erected. Notably, the Mesopotamian architectural achievements encompass the growth of towns through proper structuring techniques, the courtyard structure, and ziggurats. Landes, Mokyr, and Baumol (164-168) indicated that no architectural expertise existed in the region; nonetheless, scribes were structured and informed the setting up of buildings for the governing bodies, aesthetic civilian residences, or kingdoms residences. The Mesopotamians believed architectural designs were a spiritual gift to the male population segment by the spiritual forces (Brandoni, Ferrero, and Brunetto 1547-1558).
According to Gadotti and Kleinerman (72-77), Mesopotamia architecture is largely the one which involved the use of clay building material and of increasingly compound aspects of heaped mud-brick. For instance, adobe-brick was more commonly used as opposed to vitreous material due to its powerful thermal qualities and limited manufacturing expenditures involved in its processing. Baked brick was employed, albeit in small proportions involving water, embellishment, and huge constructions. Later on, vitreous shiny bricks were incorporated into the construction. Although, Sumerian bricks were also incorporated into the work in mortar-less form, bitumen was at times incorporated. Brick forms, which underwent evolution, are classified with respect to the actual periods when they were invented. Since curved bricks are to some extent weaker, Mesopotamian masons would vertically place a column of bricks, while others lay horizontally every few lines (Laneri 121-135). The benefits of plano-convex bricks revolved around the pace of manufacture and the rough surface on which the finishing coat stuck as opposed to smooth face from other building bricks.
Works Cited
Begemann et al. Lead isotope and chemical signature of copper from Oman and its occurrence in Mesopotamia and sites on the Arabian Gulf coast. Arabian Archaeology & Epigraphy, 21.2 (2010): 135-169.
Brandoni, Diego, Ferrero, Brenda S., and Brunetto, Ernesto. Mylodon Darwini Owen from the Late Pleistocene of Mesopotamia, Argentina, with remarks on individual variability, paleobiology, paleobiogeography, and paleoenvironment. Journal of Vertebrate Paleontology, 30.5 (20110): 1547-1558.
Gadotti, Alhena, and Kleinerman, Alexandra. Here is what I have. Send me what I am missing: Exchange of Syllabi in Ancient Mesopotamia. Zeitschrift für Assyriologie & Vorderasiatische Archäologie, 101.1 (2011): 72-77.
Landes, S. David., Mokyr, Joel, and Baumol, J. William. The Invention of Enterprise: Entrepreneurship from Ancient Mesopotamia to Modern Times. Journal of Economic Literature, 49.1 (2011): 164-168.
Laneri, Nicola. A Family Affair: The Use of Intramural Funerary Chambers in Mesopotamia during the Late Third and Early Second Millennia B.C.E. Archeological Papers of the American Anthropological Association, 20.1 (2010): 121-135.
Ulrichsen, Kristian Coates. The British occupation of Mesopotamia, 1914-1922. Journal of Strategic Studies, 30.2 (2007): 349-377. Read More
Share:
Tags
Cite this document
(“Analytical essay on Mesopotamian art and architecture”, n.d.)
Retrieved from https://studentshare.org/history/1585772-analytical-essay-on-mesopotamian-art-and-architecture

“Analytical Essay on Mesopotamian Art and Architecture”, n.d. https://studentshare.org/history/1585772-analytical-essay-on-mesopotamian-art-and-architecture.
Comments (0)
Click to create a comment or rate a document

...in the Georgian style, the building of the local library amplifies the symmetrical forms used in ancient times and the right angles spread over the entire building. Definitely, an architect approached the architectural design as an artist capable of creating art (Janaro and Altshuler 161). Henceforth, the building presupposes a vision of past through the implications of Modernism and, above all, Postmodernism in the art of architecture. Thus, the architectural terms of harmony, form and function fit well into the overall look and performance of the building in its practical use. Part 2 The graffiti near my house is what I am likely to discuss from the...
3 Pages(750 words)Essay

An Analysis of Art and Architecture

...? An analysis of Art & Architecture Artists and architects often create works of art that are very personal to them. Their life experiences and perceptions inspire them. The Chrysler building was designed by architect William Van Allen,who chose motifs relevant to the automobile. The spire is made of stainless steel and there are a band of hubcaps on a section of the spire. The top of the building is pyramid shaped with overlapping arches that give the building a taller appearance. The Chrysler is an example of Art Deco Architecture because of its use of angular, symmetrical geometric forms. Pablo Picasso painted Petit Fleurs in 1958. The...
3 Pages(750 words)Essay

..., which included Egypt and Assyria. Actually, they were a development of pictorial images where the aspect of three dimensions was captured in the end products. In America, the art was introduced by the Italian sculptors. Below is a relief sculpture of the famous Mohammed and historical law-givers. This bas type figure is found in the Supreme Court building. The building is based in Washington, DC. Corinthian column Corinthian columns represent some of the oldest Greek architecture. It dates back to the fifth century BC. They came into existence through the inventions of Callimachus, who was a sculptor and architect then in Greece. It is named after Corinth, which is a city in Greece. It is amazing that...
4 Pages(1000 words)Essay

...relationship to the contiguous views. As the occupants traverse these dimensions, they unremittingly intertwine the terrain in and out. Sociocultural context analysis Fundamentally, the above named structures receive massive ideas from the social and cultural context. Social and cultural factors greatly influence architectural works. Sociocultural context denotes to circumstances enlivening to both social and cultural matters. The word 'sociocultural' is fundamentally an amalgamation of that which encompasses both cultural and social factors. Social factors entail aspects like; political, religion, economic status, ethnicity, locality education and physical attributes. On the other hand, culture includes...
4 Pages(1000 words)Research Paper

...MESOPOTAMIA History has always been chronicled as a series of political events, rise and fall of dynasties. It is within the framework of political history that the historian has to discern the religious and intellectual emotions of the people living in the ancient world. Although literary sources are not abundant sine they have not been preserved till date, archeological sources including monuments and inscriptions provide us a more or less clear picture of the thought process of the people living in the ages gone by. Polytheistic religious ideas are evident in the inscriptions and dedications of various temples and shrines, the myths and legends of particular gods, the recorded or observed...
6 Pages(1500 words)Essay

...Art/Architecture Sustainability has become a norm within the modern architecture. The reason for this is that the earthquakes and jolts are unexpected and they could occur in any region of the world. This gives rise to the basis of building “green” buildings, which could include homes, schools, offices and community centers. As an architect, the significant points that I need to consider before embarking on building such home is that the beam for these homes is earthquake resistant and is in line with the international requirements. (Wack, 2006) Also there should be emphasis laid on the fact that in the event of a natural calamity the structure would withstand any pressure and not succumb...
2 Pages(500 words)Essay

... Mesopotamia: Mesopotamia is always referred to as the cradle of human civilization. It is known to be a land surrounded by two rivers, that is, river Euphrates which was on the southern parts of Mesopotamia, and river Tigris which was on the Northern part of Mesopotamia. These two rivers played a great role in the development of farming in Mesopotamia. Sumerians used these rivers to irrigate their lands, ensuring that there was constant supply of food for their citizens. Research denotes that human civilization began in Mesopotamia during the periods of 7000 BC. Societies in Mesopotamia were very religious in nature and they had kings and priests. These leaders used deities to control and lead their people. The economies... of these...
4 Pages(1000 words)Research Paper

...Art of Architecture The factors including concreteness, specifi and definiteness are considered as major constituents of art of writing and artifacts based on which the historical places often get renowned to the viewers worldwide by a considerable extent. Most importantly, the effectiveness of the above stated three extraordinary elements can also be found in undergoing through varied experiences that significantly aid in reviving cultural traditions and beliefs among others (Strunk & White, 2014). With this concern, in order to recall a true place from own experience and provide a brief explanation about what makes this place appears to be quite special, “The Grand Army Plaza” located in Brooklyn, US has been taken into concern... for...
2 Pages(500 words)Essay

...Rome: Art and Architecture The Colosseum, 70 CE The Colosseum is a ical architecture building. The building (also known as Flavian Amphitheatre) was constructed between 70-80 AD. Rather than being accredited with an architect, the construction of the Colosseum is accredited a number of emperors, amongst them Emperors Vespasian and Titus. The former initiated the construction of the Colosseum while the latter, who was the immediate heir, saw its completion. Over the next decades that followed the initial construction, Emperor Domitian saw the inclusion of other modifications (Kleiner 132). It is because of the family name of the three emperors who saw the construction that this...
19 Pages(4750 words)Research Paper
sponsored ads
Save Your Time for More Important Things
Let us write or edit the essay on your topic "Analysis of the Art and Architecture of Mesopotamia" with a personal 20% discount.
GRAB THE BEST PAPER

Let us find you another Essay on topic Analysis of the Art and Architecture of Mesopotamia for FREE!