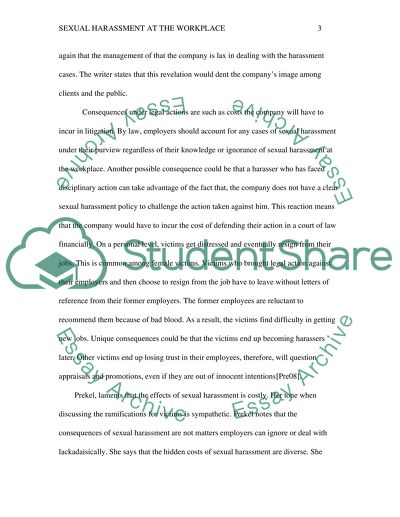 Extract of sample "Sexual Harassment at the Workplace"

Companies would also have to deal with unnecessary operational costs. In a hypothetical situation, these costs are identifiable when a senior member of the staff in the company goes on a business trip with a junior staff member. The senior member wants the junior member to satisfy their sexual needs and work-related obligations. In that case, the cost incurred in funding the junior member’s trip is a waste of company resources (Prekel, 2010). The writer argues that the consequences also extend to a company’s reputation. For example, the writer postulates a situation whereby somebody discovers that a company has cases of sexual harassment. The person finds out again that the management of that company is lax in dealing with the harassment cases. The writer states that this revelation would dent the company’s image among clients and the public.
Consequences under legal actions are such as costs the company will have to incur in litigation. By law, employers should account for any cases of sexual harassment under their purview regardless of their knowledge or ignorance of sexual harassment at the workplace. Another possible consequence could be that a harasser who has faced disciplinary action can take advantage of the fact that, the company does not have a clear sexual harassment policy to challenge the action taken against him. This reaction means that the company would have to incur the cost of defending its action in a court of the law financially. On a personal level, victims get distressed and eventually resign from their jobs. This is common among female victims. Victims who brought legal action against their employers and then choose to resign from the job have to leave without letters of reference from their former employers. The former employees are reluctant to recommend them because of bad blood. As a result, the victims find difficulty in getting new jobs. Unique consequences could be that the victims end up becoming harassers later. Other victims end up losing trust in their employees, therefore, they will question appraisals and promotions, even if they are out of innocent intentions (Prekel, 2010).
The prequel laments that the effects of sexual harassment are costly. Her tone when discussing the ramifications for victims is sympathetic. Prequel notes that the consequences of sexual harassment are not matters employers can ignore or deal with lackadaisically. She says that the hidden costs of sexual harassment are diverse. She suggests that employers should deal with cases of sexual harassment at the earliest opportunity. Prequel sees sexual harassment as a vice that both victims and employers should be concerned with eradicating to improve the workplace. On harassers, Prekel’s opinions are professional. Her insistence is that they should face formal disciplinary action and seek counseling (Prekel, 2010). Read More
Share:
Tags
Cite this document
(Sexual Harassment at the Workplace Essay Example | Topics and Well Written Essays - 636 words, n.d.)
Sexual Harassment at the Workplace Essay Example | Topics and Well Written Essays - 636 words. Retrieved from https://studentshare.org/gender-sexual-studies/1591673-sexual-harrassment-in-the-workplace
(Sexual Harassment at the Workplace Essay Example | Topics and Well Written Essays - 636 Words)
Sexual Harassment at the Workplace Essay Example | Topics and Well Written Essays - 636 Words. https://studentshare.org/gender-sexual-studies/1591673-sexual-harrassment-in-the-workplace.
“Sexual Harassment at the Workplace Essay Example | Topics and Well Written Essays - 636 Words”, n.d. https://studentshare.org/gender-sexual-studies/1591673-sexual-harrassment-in-the-workplace.
Comments (0)
Click to create a comment or rate a document

CHECK THESE SAMPLES OF Sexual Harassment at the Workplace

Organizations that are ready to upgrade their human resource...
10 Pages(2500 words)Term Paper

Freedom of Association in the Workplace

As pointed out by O’Connor J, “if the judicial power of the commonwealth is to be effectively exercised by way of conciliation and arbitration in the settlement of industrial disputes, it must be by bringing it to bear on representative bodies standing for groups of workmen….”  The observations made by O’Connor indicate that unions are necessary to redress the inherent power imbalance that exists between employer and employee and to provide effective representation for employees in the resolution of disputes.

Freedom of association under the Australian Workplace Relations Act 1996 provides the freedom to employers, employees as well as independent contractors, to join or not join indu...
6 Pages(1500 words)Term Paper

... welfare programmes and specific services for child abuse, must be invested to remedy particular problems. More generally a society that does not invest in adequate and appropriate welfare programmes undercuts the very conditions that allow for the constitution of the child and the development of childhood. A society that condemns child abuse while cutting back on welfare programmes is generating a social and political fault line of major proportions. It is engaged in a deep and irreconcilable contradiction that can only end at best in tears and at worst in something far more terrible. Women in the Workplace Men as well as women can experience sexual harassment, and women as well as men can be guilty of it. Male-instigated, heterosexual...
14 Pages(3500 words)Case Study

Age discrimination is an equally critical issue as these other discrimination forms and possesses significant impacts in the workforce (Giacalone, 2012, p.167).
For instance, age discrimination in the workplace has significantly reduced the manpower capabilities within an organization, thereby negatively impacting the productivity and profit maximization within the business association (Snape & Redman, 2003, p.80). Additionally, age discrimination has compelled some business organizations into bad reputations, thereby impacting significantly on clientele loyalty. This means that such firms may have reduced sales, and consequently reduced profits.
Age discrimination comes in two aspects of business organizations. Orga...
6 Pages(1500 words)Case Study
sponsored ads
Save Your Time for More Important Things
Let us write or edit the essay on your topic "Sexual Harassment at the Workplace" with a personal 20% discount.
GRAB THE BEST PAPER

Let us find you another Essay on topic Sexual Harassment at the Workplace for FREE!