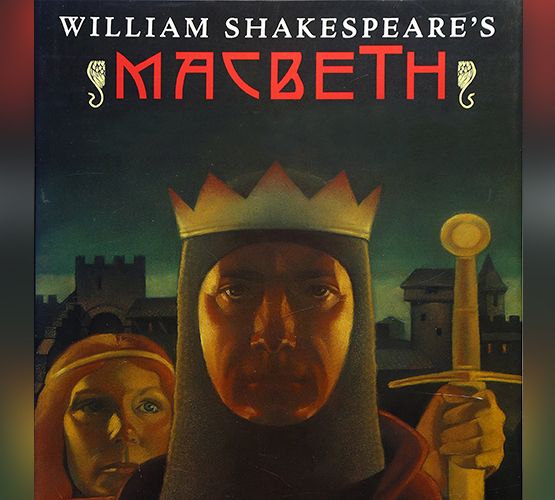 The play opens in Scotland, on the desolate piece of the land. The setting and the weather set a  tone of tension and ominousness for all the further narrative. Three witches discuss where and when they will see Macbeth. They agree to meet him on the deserted battlefield after the battle he is fighting, which is about to finish, right before the sunset.

In the camp near Forres, King Duncan with his sons and retinue awaits the news from the battlefield. His troops fight with the rebels under the leadership of Thane of Cawdor. Wounded Sergeant brings the good news: King’s cousin Macbeth defeated the Irish army and personally killed Macdonald.  Ross tells the King that right after the victory, the Scots were attacked by the  Sweno (the king of Norway). However, captains Macbeth and Banquo managed to repel the attack and defeat the Norwegians as well.

In gratitude for good service, Macbeth gains the Thane title and all the Cawdor lands.

The scene opens with the appearance of the three witches. On the heath near Forres, they brag about the evil deeds they’ve done. They wait for Macbeth and when he and Banquo come across them, Macbeth strangely feels a sort of connection to the Sisters. The three foretell Macbeth to be a king, addressing him as Glamis (his current Thane), Cawdor and the King of Scotland. While Macbeth is stupefied by the prophecy, Banquo asks the witches about his future. They respond that he will never be the king, but his descendants will rule the country. Talking in riddles, they say that compare to Macbeth he will be ‘Not so happy, yet much happier’.

Banquo says that the witches are just the ‘earth bubbles’ and there is no need to take them seriously. Yet, Macbeth is excited thinking about the chances to become the king. Meanwhile, they meet Ross and Angus, who inform Macbeth that he gains the Thane of Cawdor. Both Macbeth and Banquo are amazed since at least one part of the Witches prophecy is true. Macbeth cannot help thinking about the prospects of being the king.

The captains arrive at Duncan’s castle. The king praises them both, especially Macbeth, for their courage and loyalty. As a special honor, he promises to visit Macbeth’s castle at Iverness. He also announces that he chooses his son Malcolm as the Prince of Cumberland, which means that he will replace Duncan on the throne. With the excuse of preparation for the king’s arrival, Macbeth leaves the king’s castle earlier. However, all he can think about the king’s decision about the heir. He is disappointed and cannot refrain his craving for the throne. With the heavy thoughts and feelings, he is headed to his home.

In Macbeth’s castle, his wife Lady Macbeth is reading her husband’s letter. In this letter, he describes all the odd things he has lately been through, including the witches prophecies. As she learns that one part of the prophecies has come true, she becomes extremely excited. She feels delirious about the idea of being the king’s wife and decides to bring her husband to the throne at any costs. Lady Macbeth understands that Duncan’s visit is a perfect chance to kill the king. However, she knows that even though her husband is an ambitious man, he would hardly take the courage to kill his king. Macbeth feels loathing and fear about the necessity of killing Duncan. Despite his willingness to be the king, he doesn’t feel the resoluteness for committing the murder. So after the chat with her husband, Lady Macbeth decides to push the matter through by herself.

Duncan with his retinue arrives at the Macbeth’s castle. Staying before the walls, Duncan and Banquo discuss how beautiful the castle is. Their impressions ironically contrast with the truly baleful atmosphere of the place. Lady Macbeth welcomes the guests and according to the usual practice, tells the king that she has prepared the report about all of her possessions. Yet, the king showing his respect and benevolence, refuse to discuss such things. He willingly expresses his impatience to meet with his beloved friend, Macbeth. They all head to the castle.

Characters: Macbeth and his wife.

In his castle, Macbeth is tormented by doubts. He fears the possible punishment for Duncan’s murder both in this and in the afterlife. He thinks highly of the king, admitting that he is a decent man and a fair ruler. Finally, he seems to convince himself not to kill Duncan. However, when his wife arrives and sees her husband’s hesitancy, she starts pressuring him morally and disparaging him for his vacillation. She convinces the husband that they will not fail and he has nothing to worry about. The king will be sleeping tightly after the journey and she will narcotize his chamberlains. As a weapon, they will use the servants' daggers, so they will divert suspicion from themselves. Wife’s words make Macbeth change his mind and in the closing scene of the first act, he expresses his readiness to finish what is intended.