Comments (0)
Add to wishlistDelete from wishlist
Cite this document
Summary
International piracy has been increasingly appreciated as a global threat especially within the high seas where none of the sovereign states owns up the responsibility in ensuring security. Pirates have therefore been taking advantage of this and have been taking ships and crew…
Download full paperFile format: .doc, available for editing
HIDE THIS PAPERGRAB THE BEST PAPER93.2% of users find it useful 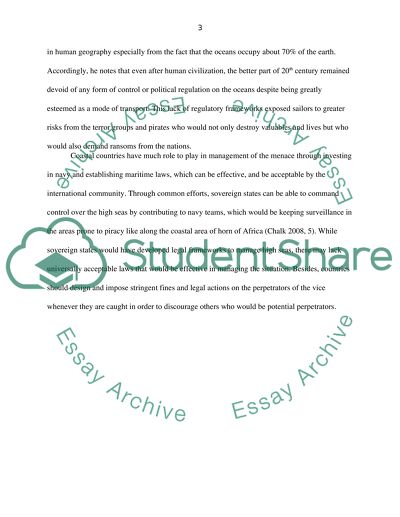 PIRACY CONTROL IN HIGH SEAS International piracy has been increasingly appreciated as a global threat especially within the high seas where none of the sovereign states owns up the responsibility in ensuring security. Pirates have therefore been taking advantage of this and have been taking ships and crew members’ hostage and in return demand for ransoms. The threat is not limited to a particular country and as such all sovereign states are faced with no alternative but to adopt some mechanisms that can be applied to control the current threat. Some efforts to draft formal laws into territorial waters were however drafted within the 20th century and must therefore be appreciated as good steps towards containing the global threat of maritime piracy.
Back in 2007, Russia rose to become a pace setter in issues of maritime policy when it planted its flag within the Arctic ocean while expressing discontentment and discord in the manner maritime security has been handled over years especially within the high seas. Dodds (2011 63-73) critically analyzes the working of CCLS (Commission on the Limits of the Continental Shelf) as well as the various strategies that have been undertaken by coastal states towards the OCS (outer continental shelf). The study appreciated the efforts embraced by such states as Russia, Canada and Norway as well as member states to European Union on matters of controlling the maritime activity as favored by their geographic proximity to the high seas.
As a discipline, political has risen to command great influence in the modern day studies as a discipline in the contemporary human society especially after the 20th century. Modernism and postmodernism have been distinctive disciplines with diversity of opinions especially in regard to human cultural diversity and the supremacy. Unlike the modernism principle that esteems ‘self’ even in matters pertaining to global effect, the postmodernism is much focused on pluralism and is much skeptical towards fundamental laws as well as the unchanging relations between individuals. Blacksell (2006, 169-171) shows that the oceans have been an integral part in human geography especially from the fact that the oceans occupy about 70% of the earth. Accordingly, he notes that even after human civilization, the better part of 20th century remained devoid of any form of control or political regulation on the oceans despite being greatly esteemed as a mode of transport. This lack of regulatory frameworks exposed sailors to greater risks from the terror groups and pirates who would not only destroy valuables and lives but who would also demand ransoms from the nations.
Coastal countries have much role to play in management of the menace through investing in navy and establishing maritime laws, which can be effective, and be acceptable by the international community. Through common efforts, sovereign states can be able to command control over the high seas by contributing to navy teams, which would be keeping surveillance in the areas prone to piracy like along the coastal area of horn of Africa (Chalk 2008, 5). While sovereign states would have developed legal frameworks to manage high seas, there may lack universally acceptable laws that would be effective in managing the situation. Besides, countries should design and impose stringent fines and legal actions on the perpetrators of the vice whenever they are caught in order to discourage others who would be potential perpetrators.
Bibliography
Blacksell, Mark. “Political Geography”. New York: Routledge, (2001) pp. 168-181.
Chalk, Peter. “The Maritime Dimension of International Security: Terrorism, Piracy and Challenges for the United States”. Santa Monica, CA: RAND Corporation, (2008). pp. 1-18.
Dodds, Klaus "Flag Planting and Finger Pointing: The Law of the Sea, the Arctic and the Political Geographies of the Outer Continental Shelf." Political Geography (2011).29 (2), pp. 63-73. Read More
Share:
Tags
Cite this document
(“Pirates and Pointing Fingers Essay Example | Topics and Well Written Essays - 500 words”, n.d.)
Pirates and Pointing Fingers Essay Example | Topics and Well Written Essays - 500 words. Retrieved from https://studentshare.org/social-science/1651083-pirates-and-pointing-fingers

CHECK THESE SAMPLES OF Pirates and Pointing Fingers

The History of the Pirates

...Pirates of Globalization: Intellectual property theft is one of the major concerns for global business leaders. In an era of globalization and fastdissemination of information, fraudulent manufacturers employ sophisticated means of acquiring patented information and exploit it for commercial gain. As Catherine Holahan notes in her article for Business Week, pirated goods now account for nearly 7 percent of all commercial activity across the world. Developing economies such as India, China, Brazil and Russia are proving to be hotbeds for this trend as Intellectual Property laws are either vague or poorly developed here. Moreover, in the era of the Internet, online commercial transactions across borders...
5 Pages(1250 words)Term Paper

Civil Partnership and Marriage are the Same

...connections with Islamic terrorists even though it is not proved yet. Under such circumstances, America should give more emphasize to the Somali pirate issue so that its counter terrorism efforts would be more meaningful. This paper analyses the role of America against Somali pirate issue. America and Somali piracy Warner (2010) pointed out that “Given Somalia’s proximity to one of the world’s main sea lines of communications through the Gulf of Aden, Somali fishermen, unrestrained by a functioning coast guard or navy, seized the opportunity to engage in maritime piracy starting in the 1990s” (Warner, 2010, p.62). Somali is a country in which governance is extremely poor. It should be...
5 Pages(1250 words)Research Paper

The Pirates of the Caribbean

...?The Pirates of the Caribbean films and Emmanuel Appadocca Overview Though generally considered as a practice of old, slavery remains one theme that most works of literacy continue to portray. Most of these works either give a historical account of days of massive slave trade across the globe or gives modern versions of the theme of slavery. The Pirates of the Caribbean and Emmanuel Appadocca are two examples of works of literature that speaks volumes on the theme of slavery. Indeed, even though both works seem to give a historical dimension of acts of slavery that are not as common in our days as they used to be some centuries ago, it is still important that the theme of slavery is reflected back to us...
5 Pages(1250 words)Essay

A usb-camera based pointing device

...work on the topic Previous works about this topic has proved that several students and professionals have tried out the idea of a cheaper version of a commercial touch screen system. A Microsoft professional by the name Michael Schwarz created a finger tracking software, which basically tracks the finger, translates the finger movement to the cursor movement. He adopted a method by which a blank A4 paper was placed on a surface and points the web cam facing down toward the blank paper. He then adjust the web cam with the system and places his finger between the paper and the camera moving his finger which then translates, into the...
16 Pages(4000 words)Research Paper

...seemed like an entirely different version of the story Susan told me. I kept my strategic silence, and tried to suppress my curiosity. “It is true that she had some disappointment about not becoming a writer or an artist, but she was always grateful to Benjamin for saving us at a crucial time. I am at times ashamed of myself, because I could not explain my behavior. I could never connect with Benjamin. We never talked to each other.” At this point, Shane had to attend a customer. I was sipping my coffee and contemplating on leaving the place when he came back to me. “I did hate his right hand. I was afraid of him touching me with it. He lost the fingers during work, when he was young. I hate the way...
13 Pages(3250 words)Essay

...The word used to define a robbery carried out at sea is piracy. Somali pirates in particular make their own laws and are after more than just a smallamount of money. They are getting advanced day by day as they are getting sophisticated in their mode of operations. The fact is that when they hijack entire ships for ransom, it not only tells us that they do not operate only through a mother ship but that they can also definitely afford to take risks. Somali pirates have a close-knit organization and are connected through land also; they are proud of themselves as they found a way to stabilize themselves when their country’s government faced destruction at the hands of a war. They possess automatic weapons...
2 Pages(500 words)Personal Statement

...Psychology of Piracy Psychology of Piracy Piracy has been a major issue in the world since time immemorial but thepsychology of piracy is not as popular as the act itself. Seamen usually face rough times in the sea while either sailing or while on the cruise ships. Most merchants want their wares delivered in time and the put pressure of otherwise good sailors and captains in order to deliver their merchandise.1 Some sailors and captains transport huge numbers of seafarers who sometimes end up in the snares of pirates. Although the tough conditions of operating in the sea contribute to piracy, it is worth looking into the psychological aspect of piracy in order to get the concept in a better way.2 This paper explores the...
6 Pages(1500 words)Essay
sponsored ads
Save Your Time for More Important Things
Let us write or edit the essay on your topic "Pirates and Pointing Fingers" with a personal 20% discount.
GRAB THE BEST PAPER

Let us find you another Essay on topic Pirates and Pointing Fingers for FREE!