Comments (0)
Add to wishlistDelete from wishlist
Cite this document
Summary
Topic: Considering the ineffectiveness of the 1982 UN Convention on the Law of the Sea (UNCLOS) on acts of piracy, discuss what additional measures are required to control piracy off the coast of Somalia, and what legal hurdles do such additional measures create with regard to preventing, prosecuting and punishing acts of piracy?…
Download full paperFile format: .doc, available for editing
HIDE THIS PAPERGRAB THE BEST PAPER91.8% of users find it useful 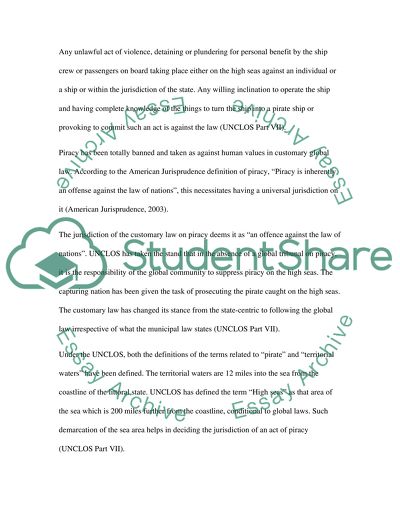 Download file to see previous pages That’s why additional measures have been taken by the stakeholder governments taking the responsibility to distress the situation off the coast of Somalia. Legal issues have been an obstacle in the taking of additional measures to preventing, controlling and punishing acts of piracy as high seas do not come under the jurisdiction of any individual country’s rights over the high-seas. That’s why global level efforts and initiatives have been taken to collectively suppress piracy not only under the UNCLOS Agreement related to enforcing but at the human level to consider and analyse the economic situation within Somalia to raise the economic standard of the people by providing help to the people so that they could find better means of earning and distract themselves away from acts of piracy. Under UNCLOS piracy has been defined as: Any unlawful act of violence, detaining or plundering for personal benefit by the ship crew or passengers on board taking place either on the high seas against an individual or a ship or within the jurisdiction of the state. Any willing inclination to operate the ship and having complete knowledge of the things to turn the ship into a pirate ship or provoking to commit such an act is against the law (UNCLOS Part VII). Piracy has been totally banned and taken as against human values in customary global law. According to the American Jurisprudence definition of piracy, “Piracy is inherently an offense against the law of nations”, this necessitates having a universal jurisdiction on it (American Jurisprudence, 2003). The jurisdiction of the customary law on piracy deems it as “an offence against the law of nations”. UNCLOS has taken the stand that in the absence of a global tribunal on piracy, it is the responsibility of the global community to suppress piracy on the high seas. The capturing nation has been given the task of prosecuting the pirate caught on the high seas. The customary law has changed its stance from the state-centric to following the global law irrespective of what the municipal law states (UNCLOS Part VII). Under the UNCLOS, both the definitions of the terms related to “pirate” and “territorial waters” have been defined. The territorial waters are 12 miles into the sea from the coastline of the littoral state. UNCLOS has defined the term “High seas” as that area of the sea which is 200 miles further from the coastline, conditional to global laws. Such demarcation of the sea area helps in deciding the jurisdiction of an act of piracy (UNCLOS Part VII). The history of piracy goes back to the medieval period when the Vikings indulged in piracy acts in Europe. Later piracy expanded to Asia, American and African waters. Off late, the most affected countries have been Nigeria and Indonesia but from 2005, the waters away from the eastern coast of Africa, particularly Somalia have faced recurrent pirate operations making it dangerous area. There is difference in the past acts of piracy with that of done currently. A number of factors are responsible for increased occurrences of pirate attacks on the Somalia waters, which are: Costly and risky cargo onboard ships. Ships carrying oil get hijacked as it happened in 2008 when a Saudi Ship, Sirius Star, valued approximately $250 million, carrying oil worth 2 million barrels for the U.S. posed great risk on the environment and causing ...Download file to see next pagesRead More
Share:
Tags
Cite this document
(“Maritime Law Literature review Example | Topics and Well Written Essays - 2000 words”, n.d.)
Retrieved from https://studentshare.org/law/1435239-pls-choose-topics-on-international-trade-transport
(Maritime Law Literature Review Example | Topics and Well Written Essays - 2000 Words)
https://studentshare.org/law/1435239-pls-choose-topics-on-international-trade-transport.
“Maritime Law Literature Review Example | Topics and Well Written Essays - 2000 Words”, n.d. https://studentshare.org/law/1435239-pls-choose-topics-on-international-trade-transport.
Comments (0)
Click to create a comment or rate a document

CHECK THESE SAMPLES OF Maritime Law

New and complex issues have arisen which demanded fresh understanding and handling of cases involved them. This has resulted in the enhanced development of specialized laws e.g. cyber laws and interpretation of those laws. The same is true with Media Laws. Media has developed much in the last half-century. As it evolved as a profession and more people started to join it, there arose the levels of money involved in it. With this grew the contractual obligations on the parts of parties and concerned laws e.g. patent laws, privacy laws, and copyrights laws, etc. also started to play their parts. With these issues, the role of law in the media industry also reached a new height.
Mathew Fisher, the appellant, joined a band with Mr...
6 Pages(1500 words)Assignment
sponsored ads
Save Your Time for More Important Things
Let us write or edit the literature review on your topic "Maritime Law" with a personal 20% discount.
GRAB THE BEST PAPER

Let us find you another Literature review on topic Maritime Law for FREE!