Comments (0)
Add to wishlist Delete from wishlist
Cite this document
Summary
This paper is going to examine this issue in regard to the international law. The issue of piracy through the international law has been a challenging one perhaps due to unclear interpretation of piracy by the international law (Murphy 52, United Nations Office on Drugs and Crime 147). …
Download full paper File format: .doc, available for editing
HIDE THIS PAPERGRAB THE BEST PAPER98.4% of users find it useful 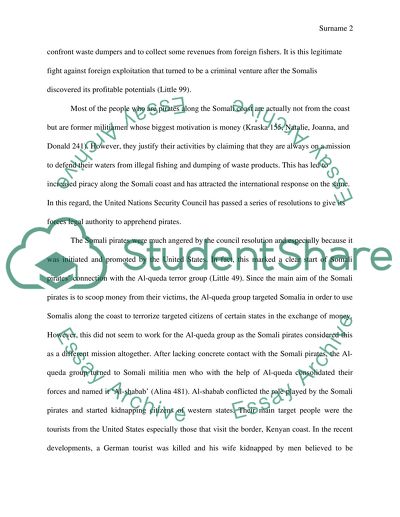 Download file to see previous pages Background of the study
In 1991, Somali went down into war after the fall of Dictator Mohamed Siad Barrre (Little 79). Shortly after his fall, some foreign countries took advantage of the anarchy and sent their navy to fish in the Somali waters. Other countries took advantage of the situation to dump their toxic waste and nuclear waste at the sea. Due to lack of government in place to control such illegal activities in the Somali waters, the Somali fishermen began to organize themselves to confront waste dumpers and to collect some revenues from foreign fishers. It is this legitimate fight against foreign exploitation that turned to be a criminal venture after the Somalis discovered its profitable potentials (Little 99).
Most of the people who are pirates along the Somali coast are actually not from the coast but are former militiamen whose biggest motivation is money (Kraska 155, Natalie, Joanna, and Donald 241). However, they justify their activities by claiming that they are always on a mission to defend their waters from illegal fishing and dumping of waste products. This has led to increased piracy along the Somali coast and has attracted the international response on the same. In this regard, the United Nations Security Council has passed a series of resolutions to give its forces legal authority to apprehend pirates. The Somali pirates were much angered by the council resolution and especially because it was initiated and promoted by the United States. In fact, this marked a clear start of Somali pirates’ connection with the Al-queda terror group (Little 49). Since the main aim of the Somali pirates is to scoop money from their victims, the Al-queda group targeted Somalia in order to use Somalis along the coast to terrorize targeted citizens of certain states in the exchange of money. However, this did not seem to work for the Al-queda group as the Somali pirates considered this as a different mission altogether. After lacking concrete contact with the Somali pirates, the Al-queda group turned to Somali militia men who with the help of Al-queda consolidated their forces and named it ‘Al-shabab’ (Alina 481). Al-shabab conflicted the role played by the Somali pirates and started kidnapping citizens of western states. Their main target people were the tourists from the United States especially those that visit the border, Kenyan coast. In the recent developments, a German tourist was killed and his wife kidnapped by men believed to be members of Al-shabab terror group. However, the Kenyan government was quick to launch a manhunt for the Al-shabab in the effort to rescue the kidnapped lady. The Kenyan government declared war against both the Somali pirates and the Al-shabab and launched a military land operation in Somalia. Kenya called for the intervention of the international community with the United States, Britain and Israel backing it up for the operation. Statement of the problem Since Somali attracted the international attention due to piracy activities, very little has been done by the international community to curb the menace. This is what has led to increased piracy activities along the Somali coast. In fact, the international ...Download file to see next pages Read More
Share:
Tags
Cite this document
(“Somali piracy and international law Research Paper”, n.d.)
Retrieved de https://studentshare.org/law/1392839-somali-piracy-and-international-law

CHECK THESE SAMPLES OF Somali piracy and international law

As a matter of fact, Hoffman’s statement that “international affairs is the nemesis of liberalism” has a grain of truth in it and this is especially so after the 9/11 incident.
There are two schools of thought or perspectives that are used to view international affairs: liberalism and realism. The study of these two perspectives is significant to the idea posed by Stanley Hoffman because they determine the reasons why international affairs, according to him, does not only see eye-to-eye with liberalism but seems to stand on the opposing side of it.
Liberalism can be defined as having four elements: citizens; the legislature; property rights, and; a market-driven economy (Dunne 186). Realism, on the othe...
6 Pages (1500 words) Assignment
sponsored ads
Save Your Time for More Important Things
Let us write or edit the research paper on your topic "Somali piracy and international law" with a personal 20% discount.
GRAB THE BEST PAPER

Let us find you another Research Paper on topic Somali piracy and international law for FREE!