Comments (0)
Add to wishlistDelete from wishlist
Cite this document
Summary
Scramble for Africa was the begging of colonization of the African continents at large the by European powers this was characterized by the following factors; political, economic and social factors. Africa was divided into the following major parts and colonized different…
Download full paperFile format: .doc, available for editing
HIDE THIS PAPERGRAB THE BEST PAPER94% of users find it useful 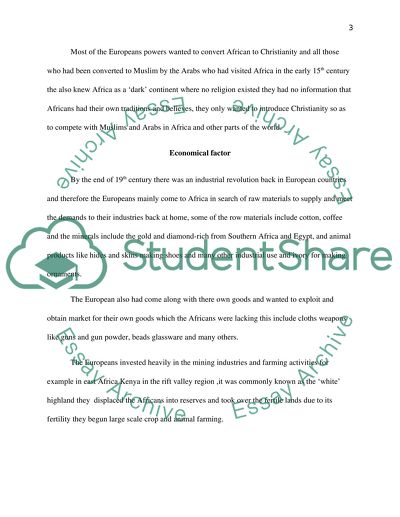 Major factors that contributed to the scramble for and acquisition of African colonies in the late 19th century s: Scramble for Africa was the begging of colonization of the African continents at large the by European powers this was characterized by the following factors; political, economic and social factors. Africa was divided into the following major parts and colonized different European countries, East Africa- by the British; Central Africa was colonized by Belgium, South Africa by the British and West Africa by France.
Factors that lead to scramble and partitions of Africa
Social factors
The Europeans wanted to spread their western cultures, this includes the mode of dressing religion ,education and administrative styles since like French used assimilation policy to rule, Africans were illiterate and their dressing code was skins and tree barks, Africans also believed in their own traditional God they had sacred places for worshiping and worshiped physical features and land marks for example in East Africa in a country called Kenya a tribe called the ‘Agikuyu’ who lived on the slopes of Mount Kenya originally known as Mount ‘Kirinyaga’.
African who lived around the Mountain worshiped the mountain as their God they had no religion at all they only worshiped the mountain and believed that God was lived at the top of the mountain. The first European to see Mount Kenya was a missionary called Dr Living Stone who was spreading Christian religion around that place on 19th century.
Most of the Europeans powers wanted to convert African to Christianity and all those who had been converted to Muslim by the Arabs who had visited Africa in the early 15th century the also knew Africa as a ‘dark’ continent where no religion existed they had no information that Africans had their own traditions and believes, they only wanted to introduce Christianity so as to compete with Muslims and Arabs in Africa and other parts of the world.
Economical factor
By the end of 19th century there was an industrial revolution back in European countries and therefore the Europeans mainly come to Africa in search of raw materials to supply and meet the demands to their industries back at home, some of the row materials include cotton, coffee and the minerals include the gold and diamond-rich from Southern Africa and Egypt, and animal products like hides and skins making shoes and many other industrial use and ivory for making ornaments.
The European also had come along with there own goods and wanted to exploit and obtain market for their own goods which the Africans were lacking this include cloths weapons like guns and gun powder, beads glassware and many others.
The Europeans invested heavily in the mining industries and farming activities for example in east Africa Kenya in the rift valley region ,it was commonly known as the ‘white’ highland they displaced the Africans into reserves and took over the fertile lands due to its fertility they begun large scale crop and animal farming.
Another factor which lead to scramble and partition of Africa was that Europeans were over populated there in their own country so they needed a new piece of land to settle and exploit resources and new opportunities.
Reference:
van Zyl, M. C. "Scramble for Africa." African Historical Review 3.1 (1971): 53-54. Read More
Share:
Tags
Cite this document
(“Discuss any two major factors that contributed to the scramble for and Essay”, n.d.)
Discuss any two major factors that contributed to the scramble for and Essay. Retrieved from https://studentshare.org/religion-and-theology/1624430-discuss-any-two-major-factors-that-contributed-to-the-scramble-for-and-acquisition-of-african-colonies-in-the-late-nineteenth-century

“Discuss Any Two Major Factors That Contributed to the Scramble for and Essay”, n.d. https://studentshare.org/religion-and-theology/1624430-discuss-any-two-major-factors-that-contributed-to-the-scramble-for-and-acquisition-of-african-colonies-in-the-late-nineteenth-century.
Comments (0)
Click to create a comment or rate a document

...?Compare and contrast two explanations of late-nineteenth century European imperialism with regards to two European empires in at least two parts of the world, from c1850 to 1914. The colonisation of India by Britain and the colonisation of Tunisia by France are often explained using similar language but they can be seen in two different ways. First of all it is possible to see them as examples of the same phenomenon, with very similar results. Secondly, it is possible to see them as different processes with completely different results. This paper explores each of these possible approaches, and then compares the...
4 Pages(1000 words)Essay

...?The Nineteenth Century America I. US acquisitions between 1803 and 1853 After the war of 1812, which was a military conflict between America and theBritish Empire, ended America began to expand its territories towards the West. There was an air of imperialism among the young Americans boosted by Marquis de Lafayette when he returned to the United States in the year 1824. He praised the role played by the young Americans for the nation’s independence. In the year 1819 the Transcontinental Treaty proposed by the then American President John Quincy Adams was signed by the United States and Spain. This treaty reinforced the American belief of territorial expansion. The desire to spread...
4 Pages(1000 words)Essay

...of the major factors that contributed to these developments include new innovations in the business strategy and technology. These developments led to new ways of farming and manufacturing and, most importantly, increased the efficiency of these economic activities. Railroad was one of the important breakthroughs during this era of industrial revolution, which enhanced movement of people as well as goods, and stimulated a range of economic activities as well as business strategies in America. This essay will discuss the developments of the industrialization during the late nineteenth century, pointing out their benefits...
5 Pages(1250 words)Assignment

Division in the nineteenth-century

.... Postcolonial theory does not introduce a novice culture, alien to the cultural norms of the indigenous, nor does it produce the ancestral culture of the natives; rather the theory is a conglomeration of elements derived from the cultures of both the colonizer and the colonized. The development of the identity of the native therefore represents a balance between native cultural values and their antithesis as introduced by the colonizers. Therefore, hybridity in postcolonial literature refers to the ‘in-betweeness’ of the attitudes of the characters that have developed as a result of clash of two different schools of thought. In A Portrait of An Artist as a Yong Man, by James Joyce, Joyce writes about various people in...
1 Pages(250 words)Essay

... for it which is in fact a single word idea of the poet about the death. None of the both poems death is seen hostile or as an alien element. It is presented as a very own native of the land and is taken as a soliciting factor. This is a brief comparison of two poems based on the persona having a ride to death. Reference: Payne, William Morton. The Greater English Poets of the Nineteenth Century. Cornell University Library. 2009. Print.... Goblin Market Goblin Market though has been interpreted in several ways but for me it is truly a hymn in praise of a sisterly devotion. The very first advice of Lizzie to Laura forbidding her listening and searching for the goblin men is the symbolic throughout the poem. The metaphor of dove used in the...
2 Pages(500 words)Book Report/Review

Scramble for and Acquisition of African Colonies

...Scramble for and Acquisition of African Colonies Introduction The scramble of African s was a period, which was characterized with rapid colonization of the continent by European superpowers during the 19th century. The colonization was rapid as every European country intended to take a hold of a country in the African continent. This period was also characterized with annexation, occupation as well as invasion of the African countries (Iweriebor). Due to the existing political in addition to economic rivalries between the European empires, the only way the European nations managed to...
2 Pages(500 words)Essay

The Scramble and Acquisition of African Colonies

...The scramble and acquisition of African Colonies Introduction Since the late nineteenth century, Africa was being colonized by European powers who divided it as a pie. They were aware of its decolonization but paid less attention to the possibility. The European countries that colonized Africa were Italy, Belgium, Britain, France, Germany, Portugal and Spain. Their colonization of Africa was because of power struggles and competition for supremacy in Europe. The scramble was a rapid colonization of the African continent after the European powers acquired colonies in...
2 Pages(500 words)Essay

...for the three religious communities. Nineteenth century Jerusalem was influenced by various developments and actors (1), including Egypt and England, the system of capitulations, the Crimean War, its expansion outside the old city walls, Zionism, and the Arab Wakening. This paper seeks to discuss the developments and events that contributed to modern day Jerusalem, specifically in the 19th century. Egypt played an imperative role in the development of 19th century Jerusalem. The ruler of Egypt in 1831, Mehmet Ali, sent his eldest son, Ibrahim Pasha, at the head of his army to conquer and occupy the Levant, which was still controlled...
6 Pages(1500 words)Research Paper

.... This work of art showing the Fontainebleau Forest, is still popular and has received acclamation for its beauty. Comparative Analysis All the works of art discussed herein were depictive of the growth of realism from late eighteenth century to late nineteenth century (Boime, 2007). All the paintings were in a way influenced by the political activities around Europe during this period. The difference is in the images in the painting, and some differences in the deeper content as analyzed by different individuals. While both Coubert and van Gogh used canvas, Rousseau used wood. The reason for the difference in choice of material is...
4 Pages(1000 words)Essay
sponsored ads
Save Your Time for More Important Things
Let us write or edit the essay on your topic "Discuss any two major factors that contributed to the scramble for and acquisition of African colonies in the late nineteenth-century" with a personal 20% discount.
GRAB THE BEST PAPER

Let us find you another Essay on topic Discuss any two major factors that contributed to the scramble for and acquisition of African colonies in the late nineteenth-century for FREE!