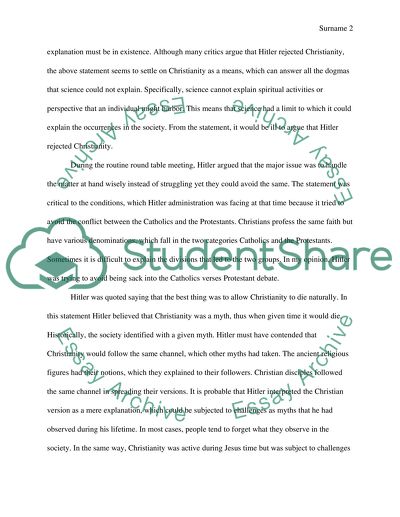 Download file to see previous pages For example, Hitler argued that he would not accept the Christian lie, further; he asserted that the societal epoch would witness the end of Christianity. I think Hitler made the statement with a specific reference to some Christianity trends that were against his political ideologies. Clerics usually use biblical quotes to convince their followers; however, the interpretation that some clerics give to the bible version sometimes may differ. This means that when an individual accept Christian virtues, he has the right to reject version or interpretations, which are not in line with the real version in the Bible.
Hitler stated that the battering ram of science would eventually collapse at some point. This statement reveals that science did not mean all to Hitler. A power greater than scientific explanation must be in existence. Although many critics argue that Hitler rejected Christianity, the above statement seems to settle on Christianity as a means, which can answer all the dogmas that science could not explain. Specifically, science cannot explain spiritual activities or perspective that an individual might harbor. This means that science had a limit to which it could explain the occurrences in the society. From the statement, it would be ill to argue that Hitler rejected Christianity.
During the routine round table meeting, Hitler argued that the major issue was to handle the matter at hand wisely instead of struggling yet they could avoid the same. The statement was critical to the conditions, which Hitler administration was facing at that time because it tried to avoid the conflict between the Catholics and the Protestants. Christians profess the same faith but have various denominations, which fall in the two categories Catholics and the Protestants. Sometimes it is difficult to explain the divisions that led to the two groups. In my opinion, Hitler was trying to avoid being sack into the ...Download file to see next pagesRead More
Share:
Tags
Cite this document
(“Germany class Essay Example | Topics and Well Written Essays - 1250 words”, n.d.)
Germany class Essay Example | Topics and Well Written Essays - 1250 words. Retrieved from https://studentshare.org/miscellaneous/1598328-germany-class

CHECK THESE SAMPLES OF Germany class

...pursing the Final Solution in other countries. Most concentration camps were located outside of Germany, in Poland. Part C: 8. Nothing is lovelier than horticulture. True. Hitler said these words in Mein Kampf. He believed that a peasant class, one that farms a country’s food, is essential for the moral and economic success of that country. He compared the German peasant class with the Russian serfs, saying that Germans were naturally better able to produce. Industrialization had harmed Germany, he said, and caused the weakening of the peasant class. He believed that Germany’s future depended on the conservation of the peasant. 12....
2 Pages(500 words)Assignment

Germany and the Germans Class

...German Stereotypes This essay will outline three positive German stereotypes that I believe are admirable and true. This paper will also discuss to what extent these stereotypes are similar or different from American traits. The first stereotype of Germans that I hold to be true and admirable is that Germans are often considered to be very direct during conversations. They come straight to the point and usually give their honest opinion. This is a good trait, especially in business situations, because a straight and honest opinion is a good base for making decisions and doing business. Although honesty is considered a good quality in America, it is often the case that conversations lack directness, because Americans do not want... Stereotypes...
1 Pages(250 words)Essay

...Due Germany Assignment Frederick the Great of Prussia and Joseph II of Austria are two unique and reputable leaders of history. Each one has contributed greatly to his country and tried to implement positive and beneficial change in the ways that they thought best. Both men were followers of a social and political ideology called “Enlightened Absolutism,” which refers to the belief in a single, absolute monarchy, or despot, where the ruler has complete and total control, but emphasizes rationality, religious tolerance, freedom of speech and of the press. They were, also, incredible supporters of the arts, sciences, and education. These men, despite their desire for positive reform, were met with much opposition...
1 Pages(250 words)Essay

8 Pages(2000 words)Assignment
sponsored ads
Save Your Time for More Important Things
Let us write or edit the essay on your topic "Germany class" with a personal 20% discount.
GRAB THE BEST PAPER

Let us find you another Essay on topic Germany class for FREE!