Comments (0)
Add to wishlistDelete from wishlist
Cite this document
Summary
Racism is any form of bigotry, prejudice, violence, oppression, stereotyping or other socially divisive practice whose primary basis is the concept of race. According to the Oxford English Dictionary, racism is a belief or ideology that all members of each race possess characteristics or abilities specific to that race, especially to distinguish it as being either superior or inferior to another race or races…
Download full paperFile format: .doc, available for editing
HIDE THIS PAPERGRAB THE BEST PAPER95.6% of users find it useful 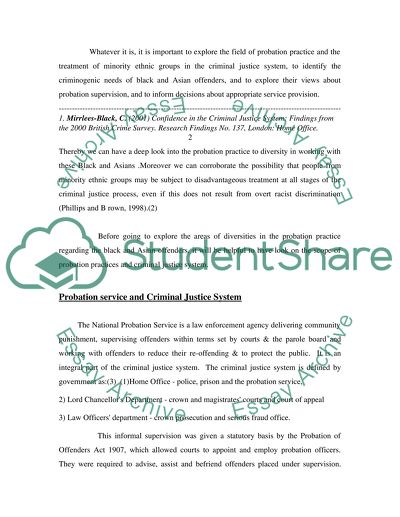 Download file to see previous pages Institutionalized racism produces discriminatory effects on health through public policy, the physical environment, social and medical services and preventive health policy.
The studies conducted by various organizations and individuals shows that the practice of racism is prevails in the criminal justice system also. There is recent evidence (from the 2000 British Crime Survey) that black and particularly Asian people are more likely than whites to say that the criminal justice system is effective in bringing offenders to justice, dealing with cases promptly and efficiently, and meeting the needs of crime victims. But at the same time Minority ethnic people were less confident that the system respected the rights of suspects and treated them fairly, and black respondents especially were less likely than whites to believe that the police treated witnesses well (Mirrlees-Black, 2001)(1).
Whatever it is, it is important to explore the field of probation practice and the treatment of minority ethnic groups in the criminal justice system, to identify the criminogenic needs of black and Asian offenders, and to explore their views about probation supervision, and to inform decisions about appropriate service provision.
Thereby we can have a deep look into the p...
1. Mirrlees-Black, C. (2001) Confidence in the Criminal Justice System: Findings from the 2000 British Crime Survey. Research Findings No. 137, London: Home Office.
2
Thereby we can have a deep look into the probation practice to diversity in working with these Black and Asians .Moreover we can corroborate the possibility that people from minority ethnic groups may be subject to disadvantageous treatment at all stages of the criminal justice process, even if this does not result from overt racist discrimination (Phillips and B rown, 1998).(2)

Before going to explore the areas of diversities in the probation practice regarding the black and Asian offenders, it will be helpful to have look on the scope of probation practices and criminal justice system.
Probation service and Criminal Justice System

CHECK THESE SAMPLES OF PROBATION PRACTICE IN ENGLAND

...Management Theory and Practice in the early childhood education industry This Report applies management theory into practice in the early childhood industry, especially in the context of women leaders. Management issues play a significant role in the academic sector, because early childhood professionals need higher levels of motivation in order to avoid burnout . As pointed out in a study by Osgood and Halsall (2007) where they carried out research to examine the position of women in leadership or management positions, a “glass ceiling” exists for women in the academic setting, which could significantly impair motivation. Since many of the individuals employed in the early education sector are women, addressing this issue is even more...
6 Pages(1500 words)Coursework
sponsored ads
Save Your Time for More Important Things
Let us write or edit the essay on your topic "PROBATION PRACTICE IN ENGLAND" with a personal 20% discount.
GRAB THE BEST PAPER

Let us find you another Essay on topic PROBATION PRACTICE IN ENGLAND for FREE!