Comments (0)
Add to wishlistDelete from wishlist
Cite this document
Summary
Teams are like pillars of an organization and just like Aube states it, they may be formed for various reasons and can either be vertical or horizontal or even virtual (Aube & Tremblay, 2011). Teams are literally the active functioning groups in an organization and most…
Download full paperFile format: .doc, available for editing
HIDE THIS PAPERGRAB THE BEST PAPER93.4% of users find it useful 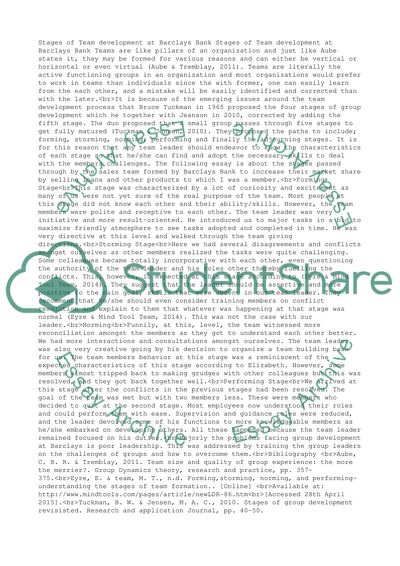 Stages of Team development at Barclays Bank Stages of Team development at Barclays Bank Teams are like pillars of an organization and just like Aube states it, they may be formed for various reasons and can either be vertical or horizontal or even virtual (Aube & Tremblay, 2011). Teams are literally the active functioning groups in an organization and most organizations would prefer to work in teams than individuals since the with former, one can easily learn from the each other, and a mistake will be easily identified and corrected than with the later.
It is because of the emerging issues around the team development process that Bruce Tuckman in 1965 proposed the four stages of group development which he together with Jeanson in 2010, corrected by adding the fifth stage. The duo proposed that a small group passes through five stages to get fully matured (Tuckman & Jensen, 2010). They proposed the paths to include; forming, storming, norming, performing and finally the adjourning stages. It is for this reason that any team leader should endeavor to know the characteristics of each stage so that he/she can find and adopt the necessary skills to deal with the members challenges. The following essay is about the stages passed through by the sales team formed by Barclays Bank to increase their market share by selling loans and other products to which I was a member.
Forming Stage
This stage was characterized by a lot of curiosity and excitement as many of us were not yet sure of the real purpose of the team. Most people at this stage did not know each other and their ability/skills. However, the team members were polite and receptive to each other. The team leader was very initiative and more result-oriented. He introduced us to major tasks in a bid to maximize friendly atmosphere to see tasks adopted and completed in time. He was very directive at this level and walked through the team giving directions.
Storming Stage
Here we had several disagreements and conflicts amongst ourselves as other members realized the tasks were quite challenging. Some colleagues became totally incorporative with each other, even questioning the authority of the team leader and his roles other thereby fuelling the conflicts. This, however, is expected at this stage according to (Eyre & Mind Tool Team, 2014). They suggest that the leader should be assertive and more positive to the main goal, skills that were absent in our team leader. They recommend that He/she should even consider training members on conflict resolution and explain to them that whatever was happening at that stage was normal (Eyre & Mind Tool Team, 2014). This was not the case with our leader.
Norming
Funnily, at this, level, the team witnessed more reconciliation amongst the members as they got to understand each other better. We had more interactions and consultations amongst ourselves. The team leader was also very creative going by his decision to organize a team building bash for us. The team members behavior at this stage was a reminiscent of the expected characteristics of this stage according to Elizabeth. However, some members almost tripped back to making grudges with other colleagues but this was resolved, and they got back together well.
Performing Stage
We arrived at this stage after the conflicts in the previous stages had been resolved. The goal of the team was met but with two members less. These were members who decided to quit at the second stage. Most employees now understood their roles and could perform them with ease. Supervision and guidance roles were reduced, and the leader devolved some of his functions to more knowledgeable members as he/she embarked on developing others. All these happened because the team leader remained focused on his duties.
Majorly the problems facing group development at Barclays is poor leadership. This was addressed by training the group leaders on the challenges of groups and how to overcome them.
Bibliography
Aube, C. B. R. & Tremblay, 2011. Team size and quality of group experience: the more the merrier?. Group Dynamics theory, research and practice, pp. 357-375.
Eyre, E. & team, M. T., n.d. Forming,storming, norming, and performing-understanding the stages of team formation.. [Online]
Available at: http://www.mindtools.com/pages/article/newLDR-86.htm
[Accessed 28th April 2015].
Tuckman, B. W. & Jensen, M. A. C., 2010. Stages of group development revisisted. Research and application Journal, pp. 40-50. Read More
Share:
Tags
Cite this document
(“Team Development Coursework Example | Topics and Well Written Essays - 500 words”, n.d.)
Team Development Coursework Example | Topics and Well Written Essays - 500 words. Retrieved from https://studentshare.org/management/1691595-team-development

CHECK THESE SAMPLES OF Team Development

...? Team Development Introduction It is important for organization managers to encourage teamwork as it increases productivity. Google’s Human Resource Department is a cross-functional team with a three-thirds staffing model created by Laszlo Bock who is the Vice President of global people operations. This paper covers the various aspects of teamwork, importance of trust in cross-functional teams, ways in which managers can create trust among cross-functional teams, cohesiveness, and strategies to help in creating, developing, and leading effective cross-functional work teams in Google Corporation. Team Development There are a number of ways in which teamwork can be created in the Google’s HR Group. Motivation is one of the key factors...
4 Pages(1000 words)Essay

...the balance between short and long-term goals. These risk factors, if identified and anticipated, can be minimized so as to use diversity as a positive aspect of team development. In the final analysis, the prerequisite diversity of multicultural teams can contribute to a more effective process of team development. It can add creative value and result in demonstrable increases in productivity. It is quite important, however, to anticipate potential disadvantages, and to either minimize those disadvantages or manage them in such a way that they also become advantages. Works Cited Adler, N. J. International Dimensions of Organizational...
2 Pages(500 words)Essay

...ng). Then each member of the class found a way to avoid such conflicts and adjust with each other (norming). Finally, each class member has fully adjusted with each other and are able to carry group projects smoothly (performing). References: Lorenz, Kate (2009). Top 10 Soft Skills for Job Hunters. Online. Available at http://jobs.aol.com/articles/2009/01/26/top-10-soft-skills-for-job-hunters/. Retrieved on January 23, 2012 Zenger, John G. et. al. (n.d.).FOUR PHASES OF TEAM DEVELOPMENT: Forming-Storming-Norming-Performing. Leading Teams. Business One Irwin, 1818 Ridge Rd., Homewood, IL 60430. Available at http://www4.uwsp.edu/centers/sieo/documents/pdf/leadershipLibrary/FOURPHASESOFTEAMDEVELOPMENT.pdf. retrieved on January 23,...
1 Pages(250 words)Assignment

...]. Example of Team and Manifestation of One of the Four Phases of Team Development In the academe, one has experienced working with going through the phases of team development through group work where course modules would require a project to be accomplished as a group. The most eminent phase of team development that the group centered on was the performing stage, where all members have recognized the need to comply with the defined roles and responsibilities to enable the accomplishment of group goals. For example, in English class where the group was expected to create a presentation about literary elements of a novel, all the members prepared to work on the tasks assigned. Apparently, one could attest that the three prior stages were...
1 Pages(250 words)Essay

...with the group can best be described by Woodcock’s analysis of team development. During this time, the objectives of the group were unclear and feelings were not expressed among group members. This stage of team development is otherwise known as the “Undeveloped Team” (Woodcock 1979). The group members were more interested in checking their cell phones or simply chatting with each other. Because of this, everything that I said had to be repeated more than once so that everyone could follow along with the lesson plan. This inevitably led to two, three, or four-hour classes instead of just the usual hour. I was the one responsible for making the decisions...
4 Pages(1000 words)Research Paper

...TEAM DEVELOPMENT (SLP) MODULE 2 Team Development (SLP) Module 2 Affiliation In order to support globalization and compete in this ever-increasing competitive world, organizations are more and more building and implementing diverse work teams. However, these diverse teams have to perform their tasks within the limitations of the issues which are introduced to them by the distance, as a result not for all time supporting useful coordination and collaboration, visibility, communication and mutual cooperation to take place. In this way, the successful implementation and management of diverse teams is ensured in a different way from traditional teams. As in traditional teams people communicate with each other directly. They work at the same...
2 Pages(500 words)Essay

My Experience of Team Development

... and the affective and cognitive states that result from the interaction. The purpose of any team work is to work toward a valued and common goal of an organization. The most important aspect of effective work teams is communication between members of a team in an efficient manner. It involves the ability of each member to understand what the other member is thinking and to determine his/her intentions in an effective manner. A. Discussion a. Team Work Theories There are numerous team development theories and this concept is not new in the modern world. These theories create an effective framework by which the contribution of each member of a team to the team’s performance and development can be evaluated and analyzed. Belbin’s theory...
7 Pages(1750 words)Assignment

...Team Building Affiliation Team development Task In many corporations. The structure of the organization dictates the tone and the mode of interpersonal communication. Organizations that are highly stratified commonly use more methods when communicating between employees and the managers. In the meantime, smaller companies may utilize relatively plain charts nature of their organization to maintain a relatively informal and terse communication. Effective leadership, therefore, calls for leaders to learn how to couple appropriate styles of communication to the norms of the company (Yukl, 2010). Effective communication in business depends on a feedback cycle, which encompasses listening to the message, speaking and confirming that whatever...
2 Pages(500 words)Assignment

...). This goes to demonstrate that setting clear goals and objectives plays a vital role in motivating teams. Similarly, many other studies have established that setting clear goals and performance expectations are important for team development and performance even in the traditional business setting (Morgeson et al 14). For instance, one study on leadership processes within sailing teams established that team leaders who set explicit goals and clear performance expectations are associated with better performing sailing teams (Morgeson et al 15). Works Cited Morgeson, Frederick. DeRue, Scott. & Karam, Elizabeth. Leadership in...
1 Pages(250 words)Essay
sponsored ads
Save Your Time for More Important Things
Let us write or edit the coursework on your topic "Team Development" with a personal 20% discount.
GRAB THE BEST PAPER

Let us find you another Coursework on topic Team Development for FREE!