Comments (0)
Add to wishlistDelete from wishlist
Cite this document
Summary
If I would be a leader, I would perform all those activities to form an efficient team. Let us discuss those activities with respect to each stage of…
Download full paperFile format: .doc, available for editing
HIDE THIS PAPERGRAB THE BEST PAPER98.5% of users find it useful 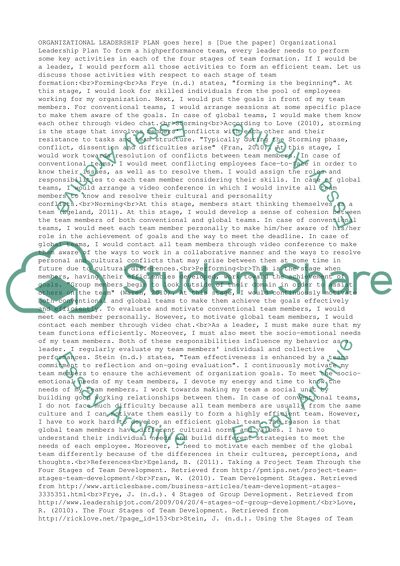 ORGANIZATIONAL LEADERSHIP PLAN goes here] s [Due the paper] Organizational Leadership Plan To form a highperformance team, every leader needs to perform some key activities in each of the four stages of team formation. If I would be a leader, I would perform all those activities to form an efficient team. Let us discuss those activities with respect to each stage of team formation:
Forming
As Frye (n.d.) states, “forming is the beginning”. At this stage, I would look for skilled individuals from the pool of employees working for my organization. Next, I would put the goals in front of my team members. For conventional teams, I would arrange sessions at some specific place to make them aware of the goals. In case of global teams, I would make them know each other through video chat.
Storming
According to Love (2010), storming is the stage that involves members’ conflicts with each other and their resistance to tasks and team structure. “Typically during the Storming phase, conflict, dissention and difficulties arise” (Fran, 2010). At this stage, I would work towards resolution of conflicts between team members. In case of conventional teams, I would meet conflicting employees face-to-face in order to know their issues, as well as to resolve them. I would assign the roles and responsibilities to each team member considering their skills. In case of global teams, I would arrange a video conference in which I would invite all team members to know and resolve their cultural and personality conflicts.
Norming
At this stage, members start thinking themselves as a team (Egeland, 2011). At this stage, I would develop a sense of cohesion between the team members of both conventional and global teams. In case of conventional teams, I would meet each team member personally to make him/her aware of his/her role in the achievement of goals and the way to meet the deadline. In case of global teams, I would contact all team members through video conference to make them aware of the ways to work in a collaborative manner and the ways to resolve personal and cultural conflicts that may arise between them at some time in future due to cultural differences.
Performing
This is the stage when members, having their efficiencies developed, work toward the achievement of goals. “Group members begin to look outside of their domain in order to assist others on the team” (Waren, 2010). At this stage, I would continuously motivate both conventional and global teams to make them achieve the goals effectively and efficiently. To evaluate and motivate conventional team members, I would meet each member personally. However, to motivate global team members, I would contact each member through video chat.
As a leader, I must make sure that my team functions efficiently. Moreover, I must also meet the socio-emotional needs of my team members. Both of these responsibilities influence my behavior as a leader. I regularly evaluate my team members’ individual and collective performances. Stein (n.d.) states, “Team effectiveness is enhanced by a teams commitment to reflection and on-going evaluation”. I continuously motivate my team members to ensure the achievement of organization goals. To meet the socio-emotional needs of my team members, I devote my energy and time to know the needs of my team members. I work towards making my team a social unit by building good working relationships between them. In case of conventional teams, I do not face much difficulty because all team members are usually from the same culture and I can motivate them easily to form a highly efficient team. However, I have to work hard to develop an efficient global team. The reason is that global team members have different cultural norms and values. I have to understand their individual needs and build different strategies to meet the needs of each employee. Moreover, I need to motivate each member of the global team differently because of the differences in their cultures, perceptions, and thoughts.
References
Egeland, B. (2011). Taking a Project Team Through the Four Stages of Team Development. Retrieved from http://pmtips.net/project-team-stages-team-development/
Fran, W. (2010). Team Development Stages. Retrieved from http://www.articlesbase.com/business-articles/team-development-stages-3335351.html
Frye, J. (n.d.). 4 Stages of Group Development. Retrieved from http://www.leadershipjot.com/2009/04/20/4-stages-of-group-development/
Love, R. (2010). The Four Stages of Team Development. Retrieved from http://ricklove.net/?page_id=153
Stein, J. (n.d.). Using the Stages of Team development. Retrieved from http://web.mit.edu/hr/oed/learn/teams/art_stages.html
Waren, R. (2010). What Are the Stages to Team Development?. Retrieved from http://ezinearticles.com/?What-Are-the-Stages-to-Team-Development?&id=4786924 Read More
Share:
Tags
Cite this document
(“Leadership Plan Essay Example | Topics and Well Written Essays - 500 words”, n.d.)
Leadership Plan Essay Example | Topics and Well Written Essays - 500 words. Retrieved from https://studentshare.org/management/1592685-leadership-plan

CHECK THESE SAMPLES OF Leadership Plan

Development of a Leadership Plan

...? Development of a Leadership Plan on Drugs Development of a Leadership Plan on Drugs Drugs comprise anything apart from food or water which, when ingested, alters the normal body or mind function. Examples of drugs entail cocaine, alcohol and steroids and can either be injected, swallowed or smoked into one’s body. They give false perception to the drug addicts and make someone perceive him/herself to be strong and a champion even if such situations cannot be true. Drugs addicts pose serious problems for the society since they contradict the norms laid out in it. Therefore, this reason caused the need for public address on the issue of drug use, especially among the youths (Dolch &Deutschmann, 2007). This has led to the emergence... . This...
5 Pages(1250 words)Research Paper

...? Personal Leadership plan of Introduction The effective management of organizations and the personnel therein requires not only good leadership qualities but also sound pre-requisite plans by which leaders execute their responsibilities (Carter et al., 2012). Outlining a personal leadership plan is however not the preserve of experienced leaders; in fact, it is highly recommended that those just starting their careers should embrace the development of personal leadership plan more than veteran leaders. One’s age and leadership experiences notwithstanding, it is necessary that a leadership plan addresses all the leadership traits and qualities that would ensure a leader stays compliant with all the legal, social, ethical, economic... ,...
4 Pages(1000 words)Essay

...? Personal Leadership Development Plan PERSONAL LEADERSHIP DEVELOPMENT PLAN Interpersonal and intrapersonal skills form one of themajor areas of concern when it comes to quality and responsible leadership (Ricketts, 2011). These are skills concerned with how an individual conducts himself or herself personally and how the individual interacts with others in his environs. From the assessment as done above, my interpersonal and intrapersonal skills rate me to be in the first category of individuals (Granville, 2010). From the assessment, I prefer to use introversion in daily life interaction and what follows closely in that line is sensing. From the description given, personally, I prefer sensing rather than intuition. Sensing... ). Looking at...
4 Pages(1000 words)Essay

...Running head: Brain smart techniques for professional development Leadership plan to facilitate professional development training for colleagues focusing on the BrainSMART techniques BranSMART techniques includes a series of exercises for the brain and it is the result of brain research conducted at many research institutes. It has been proved beyond doubt that through brain exercises, intelligence, social behavior, interaction ability, ability to concentrate and that too for long period of time and many of the cognitive abilities could be improved. Nowadays this aspect is also included in the curriculum of many advance courses for professional executives as well as educators, which would benefit not only them but also the people... ...
15 Pages(3750 words)Essay

...Leadership Plan ID Lecturer Introduction Leadership values inculcate the much needed happiness withinone’s soul. This, I say because I feel that being in the capacity of a leader helps immensely in eventual development of one’s personality. Leadership has always excited me. Being in a position where one could muster enough confidence to have one’s say is an art that a few can really master. I want to have this belief under my belt that I can become a top notch leader – a person who can break the shackles and who can bring a serious difference in the lives of the people for which the leadership attributes are instilled by me. Being 27 years old and a soon mother-to-be, I believe my priorities are set in the right direction – I want... as it...
10 Pages(2500 words)Essay

...Develop a Leadership Plan for Addressing the Issue Identified in the Case Study The Catastrophe The region of Massachusetts during June was struck by a large scale disaster owing to the striking of a tornado which in terms of magnitude is known as the F-3 Tornado. The region struck by a tornado of such high magnitude reflected large scale destruction in many community areas. Localities like Monson in Massachusetts being struck by the tornado reflected large scale destruction of buildings in which around 300 structures fell down. Moreover, several neighbourhood regions adjacent to the area of Monson suffered a huge loss of trees due to the striking of the tornado. The downtown areas of Monson largely populated by local government... around...
9 Pages(2250 words)Research Paper

...Leadership Plan for Hurricane Andrew Leadership Plan for Hurricane Andrew Introduction Disasters or catastrophes are a reality to humans. Even though, some are avoidable, others have to be experienced. In the occurrence of a disaster, awareness, response, as well as recovery to the disaster determine the degree of damage (Waugh, 2000). Critics point out that a disaster always forms an unstable work environment for both the casualties and the relief workers. This makes it difficult for emergency attempts to be executed without prearranged plans (Waugh, 2000). Such a case was witnessed in Hurricane Andrew (1992). Hence, disaster management and...
8 Pages(2000 words)Case Study

1 Pages(250 words)Assignment
sponsored ads
Save Your Time for More Important Things
Let us write or edit the essay on your topic "Leadership Plan" with a personal 20% discount.
GRAB THE BEST PAPER

Let us find you another Essay on topic Leadership Plan for FREE!