'Emotional intelligence in leaders: Does it matter' - Essay Example

Comments (0)
Add to wishlistDelete from wishlist
Cite this document
Summary
The importance of emotions in organizational leaders was mentioned and explained by Daniel Goleman who wrote the book ‘Emotional Intelligence’ in the year 1995. It has been observed that emotional decisions by leaders have proved to have magnetic effects on the leadership…
Download full paperFile format: .doc, available for editing
HIDE THIS PAPERGRAB THE BEST PAPER94.1% of users find it useful 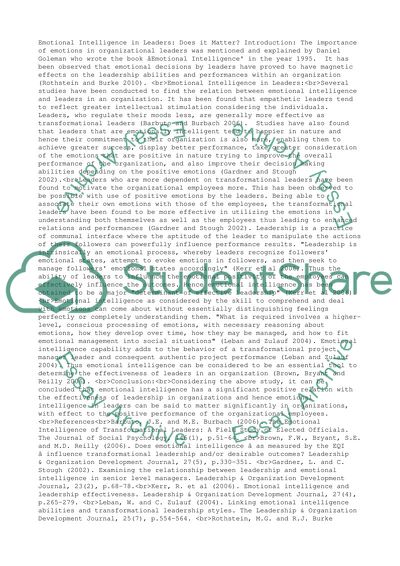 Extract of sample "'Emotional intelligence in leaders: Does it matter'"

“'Emotional Intelligence in Leaders: Does It matter' Essay”, n.d. https://studentshare.org/management/1619322-emotional-intelligence-in-leaders-does-it-matter.
Comments (0)
Click to create a comment or rate a document

CHECK THESE SAMPLES OF 'Emotional intelligence in leaders: Does it matter'

.... Moreover, another aspect to emotional intelligence is that of communication in which one develops awareness of one’s own feelings, the situation and reactions of the people around them. By doing this, a leader is able to communicate effectively with his or her juniors and fellow colleagues by addressing them in a constructive way (Leadership Organization 2012: 42). Therefore, a leader is capable of doing this only if they can anticipate the feelings of their followers, and express their own feelings in a way that does not appear negative to anyone. This creates the basis of the creative use of emotional intelligence for...
5 Pages(1250 words)Essay

..., the testee is truly a hopeful and positive person with strong self-esteem. She is not afraid to express her emotions to others at the right place and time. 2. Emotional intelligence pertains to the ability to discriminate and express emotions, to appreciate and use them, and to manage emotions in oneself and other people (Matthews, Zeidner, & Roberts, 2002, p.3). An example is two kinds of leader, a leader with high EQ and one that has poor EQ. A leader with high EQ respects the emotions of her people and uses that to attain organizational objectives. A leader with poor...
4 Pages(1000 words)Assignment

...?Emotional Intelligence Relationships in the work place and outside the firms are affected daily by emotional intelligence. Emotional intelligence refers to the ability to know or identify and control our emotion and the emotions of people surrounding us in our daily activities and using such emotional responses to guide ourselves in resolving issues for best results. Emotions are the characteristics that revolve around an individual, such as happiness, sadness, and anger. Intelligences are ability to give an explanation, identify and show the...
3 Pages(750 words)Essay

...Emotional Intelligence As It Comes To Business To be able to think emotionally is an ability which many humans draw upon during some point throughout their lives. A component to go along with what many would consider to be more rational based thinking as it comes to business and personal decision making abilities. To utilize the concept of emotional intelligence for organizational reasons can serve to play a significant role in the choices made by all participants for the betterment of the collective goal(s) at hand. Utilizing proper emotional intelligence behaviors is imperative towards reaching a conclusion through rational logic,...
10 Pages(2500 words)Essay

...to accurately analyze and process the feelings associated with that information and then express it in a way that is beneficial to self and others. Salovey and Mayer went on to complete further studies on emotional intelligence and created an ability model to explain the construct behind the theory (Salovey & Mayer, 1997). Two other constructs were a non-cognitive model proposed by Bar-On, (1997) and the competency model that was proposed by Goleman (2001). Goleman’s original book on the subject, Emotional Intelligence: Why it can matter more than IQ (1995) was written more for the business community than scientists and researchers. Leaving aside a...
5 Pages(1250 words)Essay

...Emotional Intelligence and Appreciative Inquiry Emotional Intelligence and Appreciative Inquiry Introduction Over the last fifty years, institutions or organizations have been regarded to comprises problems that must be solved. This has obliged managers to adapt a problem oriented approach in managing organization and as a result, slight achievements or accomplishments have been achieved. In this regard, there has been the need to replace the problem oriented approach with emotional intelligence and appreciative inquiry as a means of achieving improved outcomes. This paper offers a brief description of an issue in a health care setting that requires change, and how a nurse leader or manager could apply both emotional intelligence... and...
2 Pages(500 words)Term Paper

...does not cause self-awareness, it is personally attained on this student’s part. EI has become a way of knowing the self and the others and the connections needed to be happier in life. Emotional Intelligence: Why It Can Matter More Than IQ does not claim that EI can and should replace IQ. Instead, it opens people to the varied dimensions of intelligence, which can improve cognitive, social, and emotional skills. This book is recommended to students, leaders, parents, teachers, and to anyone who want to be more emotionally and socially intelligent. It is not the answer to their social...
7 Pages(1750 words)Book Report/Review
sponsored ads
Save Your Time for More Important Things
Let us write or edit the essay on your topic "'Emotional intelligence in leaders: Does it matter'" with a personal 20% discount.
GRAB THE BEST PAPER

Let us find you another Essay on topic 'Emotional intelligence in leaders: Does it matter' for FREE!