Comments (0)
Add to wishlist Delete from wishlist
Cite this document
Summary
The Courts are empowered with the task of interpreting a Statute. It is the duty of the court to act as the watchdog for the laws which are being put into place by the legislature as it works out the efficiency of such laws from the perspective of the common man. …
Download full paper File format: .doc, available for editing
HIDE THIS PAPERGRAB THE BEST PAPER97.5% of users find it useful 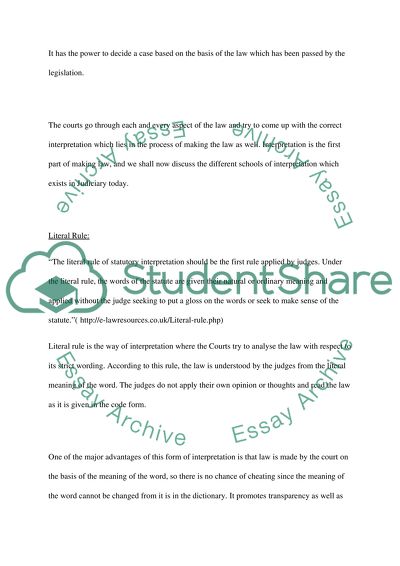 Download file to see previous pages The Courts have the power to declare a law void if it goes against the spirit of the Constitution of the supreme law of the land prevailing in the country. It has the power to nullify the effect of the law if it goes beyond the boundaries and parameters set forth to enact laws. The Courts have to keep an eye with the way the legislation is passing laws since it keeps checks and balances on the laws which are enacted in the Parliament, and the authority to decide on that is solely with the Juduciary.
The Courts have to decide on the applicability of any law. This is the greatest power which it possesses being a wing of the State. The Court has been granted the duty and the responsibility to guard the spirit of the law in its right perspective. Let us now analyse the two main duties of the courts: 1. Power to make the law 2. Power to apply the law The above are the two basic powers which the courts possess. The Judiciary is assigned the duty to apply the law as it stands out to be in cases which it gets for referral from the people. It has the power to decide a case based on the basis of the law which has been passed by the legislation. The courts go through each and every aspect of the law and try to come up with the correct interpretation which lies in the process of making the law as well. Interpretation is the first part of making law, and we shall now discuss the different schools of interpretation which exists in Judiciary today. Literal Rule: “The literal rule of statutory interpretation should be the first rule applied by judges. Under the literal rule, the words of the statute are given their natural or ordinary meaning and applied without the judge seeking to put a gloss on the words or seek to make sense of the statute.”( http://e-lawresources.co.uk/Literal-rule.php) Literal rule is the way of interpretation where the Courts try to analyse the law with respect to its strict wording. According to this rule, the law is understood by the judges from the literal meaning of the word. The judges do not apply their own opinion or thoughts and read the law as it is given in the code form. One of the major advantages of this form of interpretation is that law is made by the court on the basis of the meaning of the word, so there is no chance of cheating since the meaning of the word cannot be changed from it is in the dictionary. It promotes transparency as well as upholds the Legislature as the supreme authority in making the laws, even though the courts have a stake in the way the law is applied. However, the disadvantage of this form of interpretation is that sometimes the word can have inherently two meanings, or it may have been put to avoid a mischief, which the courts will not take into account when they interpret the law with accordance to the literal rule of interpretation. Golden Rule: “The golden rule is that the words of a statute must prima facie be given their ordinary meaning. It is yet another rule of construction that when the words of the statute are clear, plain and unambiguous, then the courts are bound to give effect to that meaning, irrespective of the consequences. It is said that the words themselves best declare the intention of the law-giver."( http://cssonline.forummotion.com/t1735-golden-rule-of-interpretation) In the case of Maumsell v. Olins, (1975) AC 373, Lord Simon formulated the exception to the "golden rule" required by technical words, or words of art, as follows : "(The 'golden rule') is sometimes put. (sic) that in statutes dealing with ordinary people, in their everyday lives, the language is presumed to be used in its primary ordinary sense unless this stultified the purpose of the statute or otherwise ...Download file to see next pages Read More
Share:
Tags
Cite this document
(“What are the principal powers available to the courts in connection Essay”, n.d.)
What are the principal powers available to the courts in connection Essay. Retrieved from https://studentshare.org/law/1433520-what-are-the-principal-powers-available-to-the

“What Are the Principal Powers Available to the Courts in Connection Essay”, n.d. https://studentshare.org/law/1433520-what-are-the-principal-powers-available-to-the.
Comments (0)
Click to create a comment or rate a document

Balanced Scorecard - An Approach for Application in Public Sector Organization

The framework should enable the organizations to identify and understand the systemic nature of their business, the key linkages and cause and effect relationship. Through this process, the organization is able to balance its priorities, allocate the available resources for maximization of the profits of the organization and generate realistic business plans. Over the years several research studies have been conducted in this field of the management science, and models like Balanced Scorecard has been developed which are basically designed for helping the organizations in their drive towards being more competitive in achieving their goals. This paper brings out an evaluation of the Balanced Scorecard model as applied to a public s...
8 Pages (2000 words) Report

A history of anti-Semitism and it is a prevalent belief in Christendom that the Jews, as the murderers of Christ, deserve all possible sufferings is the reason that Hitler's massacre of the Jews was met with silent acceptance from the vast majority of his subjects. The continued anti-Semitic feelings of the Church stem from Christian teachings based on interpretations of the New Testament that have also contributed to the Holocaust and the persecution of Jews in Europe over the centuries.
In 1814, Jews in the Papal States were locked into cramped ghettos at night, were forbidden to practice law or medicine, to hold public office or to hire Christian servants. Meanwhile, elsewhere in Europe, Jews were increasingly free to live...
11 Pages (2750 words) Assignment

Section 3 of the Public Order Act 2006 empowers a newly set up Licensing Agency to award grants to pub licensees who are licensed under the Act. Licensees are invited to apply for grants in...
11 Pages (2750 words) Case Study

In other words, descriptive research may be defined as the purposive...
8 Pages (2000 words) Term Paper

People are not just a “resource”. Each person is a complicated web of likes, dislikes, ambitions, fears, interests, passions – in short, every imaginable sentiment and belief. While it is true that people respond to a degree to external pressure, there is a point at which they will only act when they are personally convinced of the usefulness and rightness of their actions.
In an attempt to understand in a scientific way the principles by which people may be motivated, a man named Douglas McGregor had formulated a theory on human resource motivation. This is known as the principle of Theory X and Theory Y.
Almost 50 years ago, in 1960, Douglas McGregor began a debate when a published his book entitled T...
10 Pages (2500 words) Literature review

Let us find you another Essay on topic What are the principal powers available to the courts in connection with the interpretation and application of statutory legislation for FREE!