The Cycle of Leadership - Assignment Example

Comments (0)
Add to wishlistDelete from wishlist
Cite this document
Summary
The author of the assignment entitled 'The Cycle of Leadership' presents participants who should not make decisions but must allow such responsibilities to be carried out by leaders for several reasons. Executives do many things in addition to making decisions but only they make decisions…
Download full paperFile format: .doc, available for editing
HIDE THIS PAPERGRAB THE BEST PAPER98.5% of users find it useful 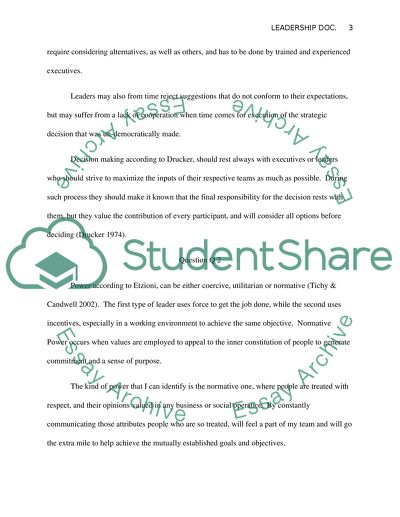 Extract of sample "The Cycle of Leadership"

Download file to see previous pages Circumstances that pose an immediate danger to life, property, sales revenues, however, may lead to other leaders arising from a lower level in the ranks to take charge. A building on fire or a company vehicle tied up in an accident traffic accidents and workers are indecisive as top what to do, are also typical examples of situations where participants will be required to make quick decisions. However, in the design of a product, choosing the most economical distribution routes, the location of the best manufacturing sites, as well as who to employ to fill certain positions, require considering alternatives, as well as others, and has to be done by trained and experienced executives. Leaders may also from time reject suggestions that do not conform to their expectations but may suffer from a lack of cooperation when the time comes for execution of the strategic decision that was un-democratically made. Decision making according to Drucker, should rest always with executives or leaders who should strive to maximize the inputs of their respective teams as much as possible. During such process, they should make it known that the final responsibility for the decision rests with them, but they value the contribution of every participant and will consider all options before deciding (Drucker 1974).

Power according to Etzioni, can be either coercive, utilitarian or normative (Tichy & Candwell 2002). The first type of leader uses force to get the job done, while the second uses incentives, especially in a working environment to achieve the same objective. Normative Power occurs when values are employed to appeal to the inner constitution of people to generate commitment and a sense of purpose. The kind of power that I can identify is the normative one, where people are treated with respect, and their opinions valued in any business or social operation. By constantly communicating those attributes people who are so treated, will feel a part of my team and will go the extra mile to help achieve the mutually established goals and objectives. In addition, at times I will employ the utilitarian source of power along with the normative to help my teams motivated. This is because although they will feel important, at times rewards will serve to reinforce those values that have been communicated to them. Having these two sources at my disposal will always lead to people become loyal, committed, disciplined and very flexible in a knowledge base economy that is subjected to changing conditions at times. These are the values that I may be able upon in times of crisis when team support and innovations become extremely important to the maintenance of a competitive edge.

CHECK THESE SAMPLES OF The Cycle of Leadership

According to Burns (1978) and Bass (1985), transformational leadership has a set of category constructs such as values, morals, farsightedness, long term goals, principles, acute awareness about the dividing line between causes and symptoms, mission statements, strategic perspectives, and human resources. Similarly, they identify a set of category constructs in the transactional leadership also. For instance concentration on the task at hand, short term goals and tactics, confusion co...
6 Pages(1500 words)Coursework
sponsored ads
Save Your Time for More Important Things
Let us write or edit the assignment on your topic "The Cycle of Leadership" with a personal 20% discount.
GRAB THE BEST PAPER

Let us find you another Assignment on topic The Cycle of Leadership for FREE!