Comments (0)
Add to wishlistDelete from wishlist
Cite this document
Summary
The major question under discussion and evaluation is “Does Alexander the Great merit his exalted historical reputation? » According to the research findings, the enormity of his vision is indicative of his extraordinary character and personality…
Download full paperFile format: .doc, available for editing
HIDE THIS PAPERGRAB THE BEST PAPER91.9% of users find it useful 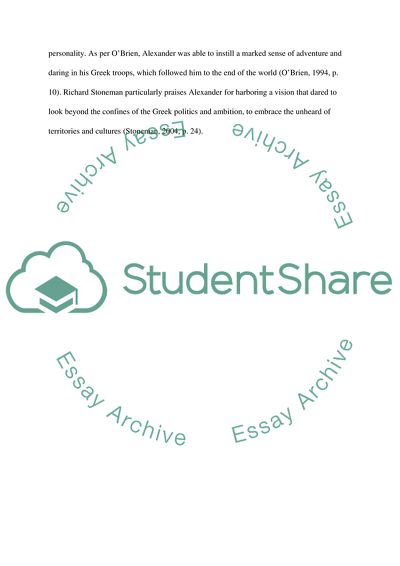 ﻿Response for "Does Alexander the Great Merit His Exalted Historical Reputation?"
Yes, Alexander the Great does deserve his exalted historical reputation as he happened to be an astute military and political leader whose vision of an empire coalescing the Greek and Asian values, traditions, territories and people was way ahead of the limited worldview subscribed to by most of the Europeans of his times. In that context the argument forwarded by Hammond is more credible as it takes into consideration the peculiar abilities and genius of Alexander that made him such a far sighted and charismatic leader.
As per Hammond, Alexander was a military leader who led from the front, a trait that imbued his soldiers with confidence and enthusiasm (Hammond, 1997). In a Greek context he commanded the loyalty and following of almost all the Greek city states and he made it a point never to step on the sovereignty and traditions of the Greek city states (Hammond, 1997). His vision as a conqueror aimed at forging a cultural, economic and political unity between Macedonia and the Asian territories he annexed to his empire (Hammond, 1997).
However, according to Rice, Alexander as a military leader happened to be impulsive and it was just owing to his good luck that he escaped getting killed in many of his foolhardy ventures (Rice, 1997). Many a times Alexander failed to understand the aspirations and sentiments of his loyal Macedonian troops, which resulted in resentment and discontent amongst them (Rice, 1997). Besides, Alexander merely focused on conquering new territories in Asia, without evincing the ability to install stable and lasting administrative machinery in them (Rice, 1997).
Still, the fame Alexander accrued is well deserved in the sense that the dream he embarked on happened to be too big and ambitious, ever to be attempted by a mortal in the world history. The enormity of his vision is indicative of his extraordinary character and personality. As per O’Brien, Alexander was able to instill a marked sense of adventure and daring in his Greek troops, which followed him to the end of the world (O’Brien, 1994, p. 10). Richard Stoneman particularly praises Alexander for harboring a vision that dared to look beyond the confines of the Greek politics and ambition, to embrace the unheard of territories and cultures (Stoneman, 2004, p. 24).
References
Hammond, N.G.L (1997). The Genius of Alexander the Great. Chapel Hill, NC: The
University of North Carolina Press.
O’Brien, L.M. (1994). Alexander the Great. London: Routledge.
Rice, E.E. (19970). Alexander the Great. New York: Sutton Publishing.
Stoneman, R. (2004). Alexander the Great. London: Routledge. Read More
Share:
Tags
Cite this document
(“Does Alexander The Great Merit His Exalted Historical Reputation Essay”, n.d.)
Retrieved from https://studentshare.org/history/1658199-does-alexander-the-great-merit-his-exalted-historical-reputation

“Does Alexander The Great Merit His Exalted Historical Reputation Essay”, n.d. https://studentshare.org/history/1658199-does-alexander-the-great-merit-his-exalted-historical-reputation.
Comments (0)
Click to create a comment or rate a document

...?How Alexander the Great conquest affected all the territories. Introduction The word ‘great’ did not attribute all the rulers but a few who actuallydeserved the title. Alexander III (356- 323 B.C.) was the great ruler who deserved the term very well. Beginning as the king of Macedonia, he became a great emperor at his thirties and his territory stretched from the Ionian Sea to India. He is considered to be the conqueror of the largest empire in the ancient history. Alexander has to his credit being tutored by the great philosopher Aristotle. “ During...
9 Pages(2250 words)Research Paper

Alexander the Great & His Glorious Battles

...Full Alexander the Great & His Glorious Battles Alexander the Great (356-323BC), king of Macedonia and conqueror of Asia Minor, Syria, Egypt, Babylonia, and the Persian ruler, was not only one of the famous military commanders, but also one of the great historical personalities. World history remembers Alexander as one of the greatest geniuses of warship. Besides his political insight, he was gifted with a rare human trait of fellow-feeling and kindness.? Greatness of Alexander Napoleon Bonaparte remarked, “The personality of the general is...
6 Pages(1500 words)Research Paper

... Ancient Greece Alexander 111 was the king of Macedon whom he succeed his father Philip11who had conquered many states. Also known as Alexander the great this was attributed by his military capability and at the age of thirty he was regarded as the powerful king of that time because he has created the largest empire which was as large from Mediterranean Sea up to Himalaya. He had successfully fought several battles under his command and conquered kingdoms and because of this he is regarded the most successful and powerful commander in the ancient history. It is also important to note that Alexander the great was taught by the highly famed and renowned philosopher Aristotle where his teachings are considered to contribute greatly... to the...
5 Pages(1250 words)Research Paper

...?Insert Insert Grade Insert Insert Alexander the Great The study aims at looking at the analysis of Alexandra the Greatwho was also known as Alexander II of Macedon, born and raised in Macedon at around 356 BC in Greece. It will be important as well to examine his personality, his military conquest and success as the successor of King Philip II who happened not only to be his mentor, but also a father who gave him the best education - studying under one of the greatest teachers at that time, Aristotle. He also acquired military skills from his father who refined his military wits, ending up building a strong empire, conquering and winning battle after battle, as his military prowess echoed in all directions. This delegation... important for...
5 Pages(1250 words)Research Paper

...was, not unnaturally for his teenage was prone to temper tantrums and sulking. The famous incident of father and son at each other's throat after Philip's taking yet another new bride, and her brother's calling Alexander a bastard, perhaps never took place. There are no historical evidences for such an incident. Instead, Philip seems to have been pleased with the unnatural strength and wisdom of his brilliantly handsome son and asked him (he tamed the famous horse Bucephala, when he was only 12), to 'seek out a kingdom worthy of thyself!' From all authentic sources Philip seems to have admired the son's great qualities. But the shadow of the mother was...
4 Pages(1000 words)Essay

...had been kind to not only his people, but also to the vanquished. Green does not rely much on facts and real research and instead, relies on unconfirmed material. “Nevertheless, few have been as free as Green in accepting uncorroborated slander as fact….it should not be a book to be introduced students to Alexander...” Greenwalt (1992, pp.530-531). Most of the reviews said Green’s highly readable biography of Alexander was more fictional and less historical. The incidents and inner minds of Philip and Alexander and their thought process could look rather wild at times. In the earlier biographies and writings, such inner thought...
4 Pages(1000 words)Essay

Acceptance of Homosexuality in the Society

...Alexander the Great Alexander the Great was one of the most successful conquerors of the ancient history; he was the king of one of the largest empires of history and remained invincible during his lifetime. Born in Macedonia, Alexander inherited strong traits of leadership, intellect and valor from his father Philip II who was the strong leader of Macedon. Alexander was very fortunate to have Aristotle as his teacher and the time he spent with Aristotle at the Academy had remarkable influences on the various decisions made by Alexander during his...
2 Pages(500 words)Essay

...﻿ Alexander the Great: Military Leadership Alexander Great is a figure of historical renown. Even today people study his life and learn more than just historical facts; they are given a role model which they can use to make decisions in their own lives. Alexander the Great was a king who was very successful. He enjoyed many victories and much wealth. Alexander continues to be listed among the great rulers of history, along with Napoleon Bonaparte and many others. Historians are fascinated with him. It has been centuries since Alexander...
8 Pages(2000 words)Research Paper
sponsored ads
Save Your Time for More Important Things
Let us write or edit the essay on your topic "Does Alexander The Great Merit His Exalted Historical Reputation" with a personal 20% discount.
GRAB THE BEST PAPER

Let us find you another Essay on topic Does Alexander The Great Merit His Exalted Historical Reputation for FREE!