Comments (0)
Add to wishlistDelete from wishlist
Cite this document
Summary
Alexander the Great was one of the most successful conquerors of the ancient history; he was the king of one of the largest empires of history and remained invincible during his lifetime. Born in Macedonia, Alexander inherited strong traits of leadership, intellect and valor from his father Philip II who was the strong leader of Macedon…
Download full paperFile format: .doc, available for editing
HIDE THIS PAPERGRAB THE BEST PAPER99% of users find it useful 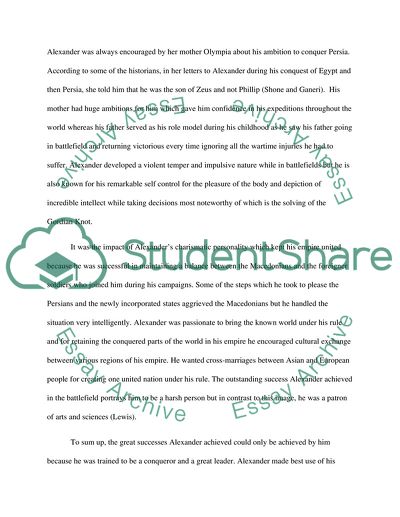 Extract of sample "Alexander the Great"

Alexander the Great Alexander the Great was one of the most successful conquerors of the ancient history; he was the king of one of the largest empires of history and remained invincible during his lifetime. Born in Macedonia, Alexander inherited strong traits of leadership, intellect and valor from his father Philip II who was the strong leader of Macedon. Alexander was very fortunate to have Aristotle as his teacher and the time he spent with Aristotle at the Academy had remarkable influences on the various decisions made by Alexander during his conquest (Stoneman).
Alexander developed the traits of a true leader because Phillip had given a great attention to the education and military training of his son. Alexander was not only brave at heart but also possessed tremendous mental strength. He always believed himself to be the true leader of Macedon and considered himself destined to defeat the Persian army and conquer Persia. Alexander always remained in search of events to prove his valor and strength as a warrior in the battlefield and lead a number of successful expeditions during the rule of his father; at times he went as far as to disregard his father’s achievements in his claim of strength and intellect (Wood). Alexander’s accession to the throne of Macedon did not took place smoothly, he has to prove himself to be the most lawful heir of the throne amid opposition from some of the most notable companions of his father, this is the reason he had to curb revolts in various regions of his father’s empire immediately after his accession, which he successfully did.
During his time at the Academy, Alexander made friends who served him during his lifetime as his generals in the battlefield and his advisors while he made important decisions; this quality of making lifelong friends contributed a lot to his success.
Alexander was always encouraged by her mother Olympia about his ambition to conquer Persia. According to some of the historians, in her letters to Alexander during his conquest of Egypt and then Persia, she told him that he was the son of Zeus and not Phillip (Shone and Ganeri). His mother had huge ambitions for him which gave him confidence in his expeditions throughout the world whereas his father served as his role model during his childhood as he saw his father going in battlefield and returning victorious every time ignoring all the wartime injuries he had to suffer. Alexander developed a violent temper and impulsive nature while in battlefields but he is also known for his remarkable self control for the pleasure of the body and depiction of incredible intellect while taking decisions most noteworthy of which is the solving of the Gordian Knot.
It was the impact of Alexander’s charismatic personality which kept his empire united because he was successful in maintaining a balance between the Macedonians and the foreigner soldiers who joined him during his campaigns. Some of the steps which he took to please the Persians and the newly incorporated states aggrieved the Macedonians but he handled the situation very intelligently. Alexander was passionate to bring the known world under his rule and for retaining the conquered parts of the world in his empire he encouraged cultural exchange between various regions of his empire. He wanted cross-marriages between Asian and European people for creating one united nation under his rule. The outstanding success Alexander achieved in the battlefield portrays him to be a harsh person but in contrast to this image, he was a patron of arts and sciences (Lewis).
To sum up, the great successes Alexander achieved could only be achieved by him because he was trained to be a conqueror and a great leader. Alexander made best use of his experiences throughout his life and had vigor for intellectual knowledge and generalship. Because of his exemplary leadership he is still considered as one of the greatest conquerors of the world; the influences of his conquest can be observed today as well in the form of Hellenization. Alexander’s life teaches us continued struggle and learning is the key to achieve glory.
Works Cited
Cummings, Lewis. Alexander the Great. N.p.: Grove Press, 2004. Print.
Shone, Rob, and Anita Ganeri. Alexander the Great: the life of a king and conqueror. N.p.: The Rosen Publishing Group, 2005. Print.
Stoneman, Richard. Alexander the Great. N.p.: Routledge, 2004. Print.
Wood, Michael. Alexander the Great: selected texts from Arrian, Curtius and Plutarch. N.p.: Penguin, 2004. Print. Read More
Share:
Tags
Cite this document
(“Alexander the Great Essay Example | Topics and Well Written Essays - 500 words”, n.d.)
Alexander the Great Essay Example | Topics and Well Written Essays - 500 words. Retrieved from https://studentshare.org/history/1583838-alexander-the-great

CHECK THESE SAMPLES OF Alexander the Great

...?How Alexander the Great conquest affected all the territories. Introduction The word ‘great’ did not attribute all the rulers but a few who actuallydeserved the title. Alexander III (356- 323 B.C.) was the great ruler who deserved the term very well. Beginning as the king of Macedonia, he became a great emperor at his thirties and his territory stretched from the Ionian Sea to India. He is considered to be the conqueror of the largest empire in the ancient history. Alexander has to his credit being tutored by the great philosopher Aristotle. “ During their three years together at Mieza, Aristotle taught...
9 Pages(2250 words)Research Paper

... Ancient Greece Alexander 111 was the king of Macedon whom he succeed his father Philip11who had conquered many states. Also known as Alexander the great this was attributed by his military capability and at the age of thirty he was regarded as the powerful king of that time because he has created the largest empire which was as large from Mediterranean Sea up to Himalaya. He had successfully fought several battles under his command and conquered kingdoms and because of this he is regarded the most successful and powerful commander in the ancient history. It is also important to note that Alexander the great was taught by the highly famed and renowned philosopher Aristotle where his teachings are considered to contribute greatly... to the...
5 Pages(1250 words)Research Paper

...?Insert Insert Grade Insert Insert Alexander the Great The study aims at looking at the analysis of Alexandra the Greatwho was also known as Alexander II of Macedon, born and raised in Macedon at around 356 BC in Greece. It will be important as well to examine his personality, his military conquest and success as the successor of King Philip II who happened not only to be his mentor, but also a father who gave him the best education - studying under one of the greatest teachers at that time, Aristotle. He also acquired military skills from his father who refined his military wits, ending up building a strong empire, conquering and winning battle after battle, as his military prowess echoed in all directions. This delegation... important for...
5 Pages(1250 words)Research Paper

...ALEXANDER'S RELATIONSHIP WITH HIS FATHER ASSIGNMENT YEAR Alexander the Great is a matter of unending excitement for the entire world. In this assignment, I have made attempts to evaluate his relationship with his illustrious father, Philip. Recently on the Web and in new cinema, various versions have been presented. I have tried to find out more about their relationship depending on authentic books. ALEXANDER'S RELATIONSHIP WITH HIS FATHER Perhaps most will agree that Alexander was the rarest of the rare, a blazing Sun across the horizon of history, not because he conquered most of the world, but because of his sterling qualities. His father Philip too was a great and courageous ruler. Some historians say... was, not...
4 Pages(1000 words)Essay

...185229 Peter Green’s Biography of Alexander is considered to be brilliant, easy to read, backed by enormous amount of anecdotes, and extremely vivid and colourful. Lack of good and complete biographies of such a vibrant historical figure like Alexander makes Green one of the very important writers on the subject. Many reviewers of the book have pointed out the shortage of maps as one of the drawbacks. The book was criticised that there are too many anecdotes about philosophers, Gordian knot, horses and Alexander himself. It is difficult to say that it is a negative point. As these anecdotes were around for a long time now and as Alexander even though historical,...
4 Pages(1000 words)Essay

Used Romeo and Juliet play with topic: Love is a dream as a theme AND dream vs. reality as a subtopic

...﻿ Introduction It would not be a mistake to suggest that there are people who were able to influence the development of the mankind by their actions. It is generally thought that great scientists opened new horizons for the humanity, but in many cases rulers also were able to have a significant impact on history. Alexander the Great was one of such remarkable generals who personally changed the course of history to a certain extent. That is why it may be particularly important to explore his life and legacy in order to understand his significance in the world history. This paper will describe the conquests of Alexander, paying particular attention to his influence on...
4 Pages(1000 words)Essay
sponsored ads
Save Your Time for More Important Things
Let us write or edit the essay on your topic "Alexander the Great" with a personal 20% discount.
GRAB THE BEST PAPER

Let us find you another Essay on topic Alexander the Great for FREE!