The Scramble and Acquisition of African Colonies - Essay Example

Comments (0)
Add to wishlistDelete from wishlist
Cite this document
Summary
This research is being carried out to evaluate and present economic and political factors of the scramble and acquisition of African colonies. Since the late nineteenth century, Africa was being colonized by European powers who divided it as a pie…
Download full paperFile format: .doc, available for editing
HIDE THIS PAPERGRAB THE BEST PAPER95.2% of users find it useful 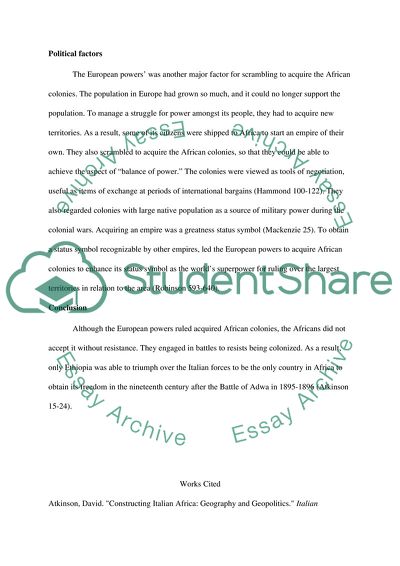 Extract of sample "The Scramble and Acquisition of African Colonies"

The scramble and acquisition of African Colonies Introduction Since the late nineteenth century, Africa was being colonized by European powers who divided it as a pie. They were aware of its decolonization but paid less attention to the possibility. The European countries that colonized Africa were Italy, Belgium, Britain, France, Germany, Portugal and Spain. Their colonization of Africa was because of power struggles and competition for supremacy in Europe. The scramble was a rapid colonization of the African continent after the European powers acquired colonies in 1880-1900. The scramble was pushed by the economic, social, and political evolution that Europe was going through. It developed in the nineteenth century due to collapse of the slave profitability, abolition and the European expansion (Mackenzie 513-528).
Economic factors
During the late nineteenth century, European countries like Britain were suffering growth deficit in its balance of trade. The imperatives of capitalist development spurred the European scramble. Thus, the goal of European intrusion was economically driven. Their objective was to find assured sources of raw materials, guaranteed markets, and profitable investment outlets (Wesseling 49). Their countries had limited resources and also highly populated. They dispersed themselves to the African continent to scramble and acquire colonies. During their trade with Africans, they realized that the continent was endowed with various minerals. Imperialism was also induced by the demand for raw materials unavailable in Europe. Africa had cotton, tea, rubber, diamonds, palm oil, copper and cocoa. The European consumers had grown accustomed to the products of the raw materials. The European industry as well had grown to depend on the raw materials from the continent of Africa (Ekechi 124-128).
Political factors
The European powers’ was another major factor for scrambling to acquire the African colonies. The population in Europe had grown so much, and it could no longer support the population. To manage a struggle for power amongst its people, they had to acquire new territories. As a result, some of its citizens were shipped to Africa to start an empire of their own. They also scrambled to acquire the African colonies, so that they could be able to achieve the aspect of “balance of power.” The colonies were viewed as tools of negotiation, useful as items of exchange at periods of international bargains (Hammond 100-122). They also regarded colonies with large native population as a source of military power during the colonial wars. Acquiring an empire was a greatness status symbol (Mackenzie 25). To obtain a status symbol recognizable by other empires, led the European powers to acquire African colonies to enhance its status symbol as the world’s superpower for ruling over the largest territories in relation to the area (Robinson 593-640).
Conclusion
Although the European powers ruled acquired African colonies, the Africans did not accept it without resistance. They engaged in battles to resists being colonized. As a result, only Ethiopia was able to triumph over the Italian forces to be the only country in Africa to obtain its freedom in the nineteenth century after the Battle of Adwa in 1895-1896 (Atkinson 15-24).
Works Cited
Atkinson, David. "Constructing Italian Africa: Geography and Geopolitics." Italian
colonialism. 2005.
Ekechi, Felix. "The Consolidation of Colonial Rule, 1885–1914." In Colonial Africa, 1885– 1939, vol. 3 of Africa, ed. Toyin Falola. Durham: Carolina Academic Press. 2002.
Robinson R., Gallagher J., and Denny A. Africa and the Victorians. London. 1965.
Hammond, Richard J. Portugal and Africa, 1815-1910: a study in uneconomic imperialism. Stanford University Press. 1966.
Mackenzie J. M. The Partition of Africa, 1880-1900, and European Imperialism in the Nineteenth Century. London. 1983.
Wesseling, H.L. and Arnold J. Pomerans. Divide and rule: The partition of Africa, 1880- 1914. Praeger. 1996. Read More
Share:
Tags
Cite this document
(“The Scramble and Acquisition of African Colonies Essay”, n.d.)
The Scramble and Acquisition of African Colonies Essay. Retrieved from https://studentshare.org/history/1641202-choose-any-topic-please-i-dont-have-specific-one

“The Scramble and Acquisition of African Colonies Essay”, n.d. https://studentshare.org/history/1641202-choose-any-topic-please-i-dont-have-specific-one.
Comments (0)
Click to create a comment or rate a document

CHECK THESE SAMPLES OF The Scramble and Acquisition of African Colonies

...actors .Thus, the motives of British imperialism in scramble for Africa can be grasped within its international context, particularly with reference to the rivalry with France and Russia (e.g. the Eastern question). REFERENCES: Baumgart, Winfried (1982). Imperialism: The Idea and Reality of British and French Colonial Expansion,1880-1914. Trans. Winfried Baumgart. Oxford: Oxford University Press. Hobson, J.A. (1902). Imperialism: a Study. New York: Cosimo (2005). Lenin, Vladimir Ilyich. (1916). Imperialism, the Highest Stage of Capitalism. http://www.marxists.org/archive/lenin/works/1916/imp-hsc/ch06.htm. Date accessed 14/3/2011. Hopkins, A.G. (1986). “The Victorians and Africa: A Reconsideration of the...
5 Pages(1250 words)Essay

...? Acquisition Reform Acquisition Reform The Defense department is one of the major sectors in the United s. It is oneof the largest consumers of the US budget. On the other hand, the economic aspects of the US depend on the defense actions of the country. The nation’s defense power is directly proportional to the economic performance of a nation. Now, it is evident that there exists mutual dependency between the US military and the economic performance of this country (Dirk, 1994 p. 89). In this context, it becomes logical to evaluate the eminent relationship between them. Therefore, the defense department depends so much on the economic sector of the American population. The military’s economic...
5 Pages(1250 words)Research Paper

...? Acquisition Strategy Acquisition Strategy Business acquisitions entail the process by which different companies within the same industry combine through the buying or selling of their entities. This enables them to foster regional growth without having to expand by opening new branches. This process of acquisition covers the three major aspects of business economics, which includes management, corporate finance and the corporate strategy. All these fields of business interact while conducting their business practices, whilst evaluating the need for an acquisition. Acquisitions normally occur when a big company buys the business premises of a smaller company within the same industry. Upon acquisition, the two involved companies... ...
3 Pages(750 words)Essay

...Colonization Nature of Colonists The nature of colonizers border on their innate capa to lead; the way they choose centralization of power (one world) over equality of resources but then adhere to social order. They may want prestige, money and power, yet people still gain significantly from them, further hastening their growth as one community. In Jamestown Settlement, Captain Smith’s integrated leadership paved the way to a successful colony. Captain Smith’s principle in colonization was no different from that of Bradford’s and Winthrop’s. They came upon by chance of believing in one authority that disperses “equality.” The three of them believed in the divine providence. However, each of them had their own resources, ways... Nature of...
2 Pages(500 words)Essay

...Major factors that contributed to the scramble for and acquisition of African colonies in the late 19th century s: Scramble for Africa was the begging of colonization of the African continents at large the by European powers this was characterized by the following factors; political, economic and social factors. Africa was divided into the following major parts and colonized different European countries, East Africa- by the British; Central Africa was colonized by Belgium, South Africa by the British and West Africa by France. Factors that lead to scramble and partitions of Africa Social factors The Europeans wanted to...
2 Pages(500 words)Essay

Scramble for and Acquisition of African Colonies

...Scramble for and Acquisition of African Colonies Introduction The scramble of African s was a period, which was characterized with rapid colonization of the continent by European superpowers during the 19th century. The colonization was rapid as every European country intended to take a hold of a country in the African continent. This period was also characterized with annexation, occupation as well as invasion of the African countries (Iweriebor). Due to the existing political in addition to economic rivalries between the European empires, the only way the European nations managed to avoid warring over...
2 Pages(500 words)Essay

... Factors that contributed to scramble and acquisition of African colonies The scramble for Africa, also known as race for Africa was the invasion, occupation and colonization, and later annexation of Africa by European powers, during the late 19th century. This was marked by the new imperialism period that transpired between 1881 and 1914.This happened due to what the European powers were facing evolution in the field of economics and military and numerous changes in social ways of life. Before the scramble, that is 1880s, only small part of Africa was under European rule. These areas were next to big rivers and coastal regions. Thereafter, the European powers struggled to create a sphere of influence for themselves in Africa... . These...
2 Pages(500 words)Essay

...Network Acquisition affiliation Network Acquisition Network acquisition occurs when a company merges with or is taken over by another it accepts to collaborate with another. An example of network acquisition would be Google and other companies. It is a case where the company has bought another company and thus there is a need to merge or integrate the company’s network with the existing one. In this case, our company being the dominant partner in the merger has control over the IT merger process and consequently a great advantage over the business and political decisions. Project acquisition is in itself a specific and crucial process when working with...
2 Pages(500 words)Essay

...Full Paper Network Acquisition The requirement of initiation phase triggers when a certain business process needs improvements or enhancements by implementing an application that is based on information technology. However, the decision for initializing business phase is determined by the management. Moreover, the project plan incorporates three rationales, which are defined below (Lester, 2013): Classify and categorize the deficiency in a specific business process in order to improve business functions for the betterment of an organization In order to support the first rationale, identification is required of considerable hypothesis and restraint for the solutions that must met the criteria In order to secure the requirements... Paper...
1 Pages(250 words)Essay
sponsored ads
Save Your Time for More Important Things
Let us write or edit the essay on your topic "The Scramble and Acquisition of African Colonies" with a personal 20% discount.
GRAB THE BEST PAPER

Let us find you another Essay on topic The Scramble and Acquisition of African Colonies for FREE!