Comments (0)
Add to wishlistDelete from wishlist
Cite this document
Summary
European encounter with their colonial states changed the historical and political landscape of these economies transforming their societal laws, values, religion and culture. European quest for control was largely for territorial rule and economic gain. When Europe conquered…
Download full paperFile format: .doc, available for editing
HIDE THIS PAPERGRAB THE BEST PAPER91.6% of users find it useful 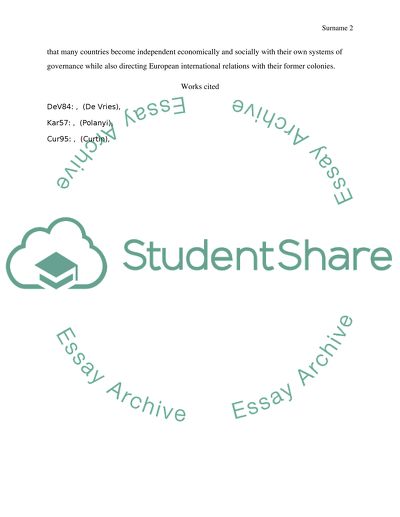 European Colonialism European encounter with their colonial s changed the historical and political landscape of these economies transforming their societal laws, values, religion and culture. European quest for control was largely for territorial rule and economic gain. When Europe conquered America during the 1500, America was characterized by inferior economy with sparse population often associated with high mortality rate. Although the initial effects on colonial states were destructive, it led to improved economic and social conditions in the long run in terms of high population increase, introduction of foreign crops and materials and high per capita earning of these states while at the same time enriching Europe. (De Vries)
The creation of Atlantic system traces the European industrialization process within an expanding Atlantic trade. Europe driven by coercive slave trade policies, several driven by inland transportation difficulties in these pre-industrialized propelled the trade movement into the Atlantic. To a larger extent, slave trade deprived colonized states of human labor while exporting the same towards the development of industries in wool industry, agriculture, marine insurance, social structure among others, strengthening Europe’s position as a premier in international trade and controlling treaties. (Polanyi)
The dawn of 1880s saw a new interest among European nations to control as much world as possible having pioneered itself in the International trade. One major outcome was the ‘scramble for Africa’ which created conflicts among nations and individuals. While being motivated by economic rather than political interests, Europe advanced slave trade to demonstrate colonialism as a powerful tool for conquest and ‘desire’ to deliberate the world. In effect this led to massive resources transfer and acquisition for development of Europe while changing the existing cultural beliefs in colonized countries. (Curtin)
Studies by Bohannan & Curtin suggests that after years of European colonization, many African and Asian countries began gaining independence from Europe. Coinciding with the Cold War period, many of these colonized states either achieved decolonization peacefully or through revolutions. In essence, the process was influenced by super power competition. The result is that many countries become independent economically and socially with their own systems of governance while also directing European international relations with their former colonies.
Works cited
Bohannan, Paul and Philip D. Curtin. Africa and Africans. 4th. Prospect Heights, IL: Waveland, 1995.
Curtin, Philip. African History: From Earliest Times to Independence. 2nd. Boston: Addison Wesley, 1995.
De Vries, J. European Urbanization, 1500-1800. London: Methuen, 1984.
Polanyi, Karl. The Great Transformation: The political and economic origins of our time. Boston: Beacon Press, 1957. Read More
Share:
Tags
Cite this document
(“European colonialism Essay Example | Topics and Well Written Essays - 250 words”, n.d.)
European colonialism Essay Example | Topics and Well Written Essays - 250 words. Retrieved from https://studentshare.org/history/1596982-european-colonialism

CHECK THESE SAMPLES OF European colonialism

...﻿European colonialism and Africa European colonialism, which prevailed in Africa, is deeply rooted in the renaissance spirit and the related geographical discoveries. One can see that colonialism helped the European nations to attain economic development and to be in the forefront of modernization. Besides, colonialism helped the European nations to exploit the natural resources and human resources in Africa. Still, one cannot neglect some of the positive aspects of colonialism because the same was helpful for the development of Africa in the post-colonial era....
6 Pages(1500 words)Essay

European colonialism is often depicted as a force of greed that exploited the African people for financial gain however, one cou

... Moral Benefits of Colonization to both Africans and Europeans Many accusations have been raised towards the west for the African colonization. Accusing fingers have been pointed towards the colonial rule, its evils and the suffering that African people were subjected in the hands of the Europeans. True to this argument, many people suffered, while death was of Africans was a common occurrence. Casualties were reported frequently, especially to the rebellious communities. It was so naive for the indigenous people of Africa to have fought the Europeans with bows and arrows, with expectations of winning the war. Europeans used guns and bombs. This was described as spiritual or religious war, as the Africans hoped for immunity... from...
8 Pages(2000 words)Essay

European colonialism over African people as benefit for both sides

...? World Literature 25 November European colonialism over African people as benefit for both sides Introduction The debateabout the effects of European colonialism on Africana and the Europeans has been great. Although the Eurocentric scholars that wrote the history of colonialism placed more emphasis on the positive effects of colonization, such as the medical advances that were made and modernity and the new technologies that were introduced, there were negative effects as well. It is a fact that “the colonial era interrupted Africa’s natural development and condemned the continent to stagnation and continued...
5 Pages(1250 words)Essay

The Impact of 19th Century European Colonialism on the Third World

...?The Impact of 19th Century European Colonialism on the Third World The advent of colonialism in Africa and Asia has been blamed for the situation that led to the underdevelopment of the Third World and this has led to a high prevalence of poverty. In the modern world poverty has been defined as the shortage of human needs such as clothing, food, and shelter, and today it haunts many people across the Third World as a direct and in some cases indirect result of European colonialism. While this has been the case, it is a fact that very little has been done or is being done to curb this menace, and this has been mainly because of the continued dominance of...
6 Pages(1500 words)Essay

Impacts of European Colonialism in Africa

... College Impacts of European Colonialism in Africa 27 April Prior to 19th century the rest of the world influenced little concerning Africa so called the Dark Continent in the time. However, there was some growing in the beginning of the early 1800s when explorers started their mission to the continent’s interior. Most of the first European explorers in Africa were the missionaries who came with the mission of ministering to pagan African tribes. The majority of these missionaries wanted to eradicate the harmful trade (slave trade) that wrecked danger on most of poor Africans… (Paula 1998). After seven centuries of being mistreated by Arab slave traders, Europeans took the available advantage of existing system towards blacks...
9 Pages(2250 words)Essay

...Causes of Colonialism The colonization of the Western hemisphere by different countries started as early as the 11th century with the influx of Catholic Spain and Portugal into the region. An analysis of the whole colonial process in the region indicates that the two main reasons for the colonization of the Western hemisphere were economic and religious reason. Though there existed other factors like culture in the colonization process, economic and religious reasons pushed the major colonizers to acquire lands in the New World (Mignolo and Ennis, 2001). For example, research states that Spain was one of the first countries to look for colonies and was in it purely for the economic...
2 Pages(500 words)Essay

... Colonialism Question Scripts entail colonialism, democracy, and globalization in the Middle East. Some countries in the Middle East find it difficult in reciting the scripts because of post-colonial practices, which have undermined the civil society’s notion. These practices have created geographical and economic scripts that people in the decolonized countries cannot recite. Some interests that differ from national interests, i.e. the industrialized interest makes it hard to recite the scripts. Three key forces, i.e. direct colonization, defensive modernization and imperialism have adversely affected the sovereignty, as well as, the self-determination amongst people in the Middle East. These forces have prevented the region... from...
1 Pages(250 words)Essay

The European Colonialism in 16th century to mid 20th

...﻿Introduction Colonialism entails the establishing, exploiting, maintaining, acquiring and expansion of a colony by a political power in one territory to another territory. A relationship that is not equal between the colonial power and the colony and even between the indigenous population and the colonial power was evident. The European colonialism was from the 16th century to mid 20th century, an era when authorities from different European countries established their colonies in Africa, Asia and within America (Margaret, 2006). Initially, countries followed mercantilist policies...
4 Pages(1000 words)Research Paper
sponsored ads
Save Your Time for More Important Things
Let us write or edit the essay on your topic "European colonialism" with a personal 20% discount.
GRAB THE BEST PAPER

Let us find you another Essay on topic European colonialism for FREE!