Comments (0)
Add to wishlistDelete from wishlist
Cite this document
Summary
The British displaced the original residents of America which they previously called newfound land who were the Red Indians and occupied the area changing the culture to represent that of Europe. The Period…
Download full paperFile format: .doc, available for editing
HIDE THIS PAPERGRAB THE BEST PAPER91.3% of users find it useful 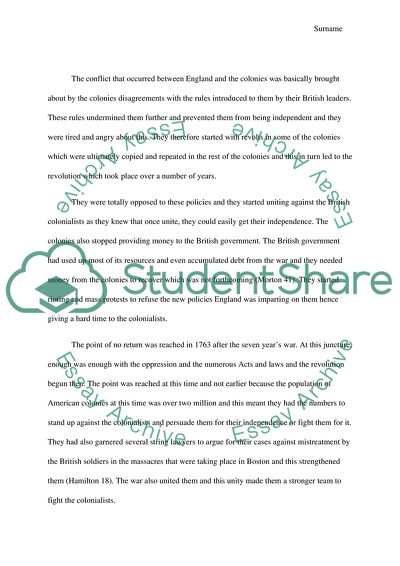 American Revolution Introduction America was a British colony before 1776 when they gained independence. The British displaced the original residents of America which they previously called newfound land who were the Red Indians and occupied the area changing the culture to represent that of Europe. The Period between 1763 and 1783 saw the Americans fight the British soldiers in a bid to seek their independence in what was termed as the American Revolution (Frank 65). The paper will explore in detail and using examples the basic cause and nature of the American Revolution and why it took place at that particular time in history.
The revolution took place as a result of accumulated grievances which the American people had had enough of. They were also protesting against the various acts that had been established by England and which were to their disadvantage. An example was the Stamp Act of 1765 which imposed that every American was to pay taxes to England in order to offset the costs of running the British Military Organization. There was the currency act of 1764 that prohibited issuance of legal tender money and this threated to destabilize the industrial economy. The quartering act of 1765 also contributed to the revolution as it required colonialists to house troops from Britain and even supply them with their hard earned food.
The conflict that occurred between England and the colonies was basically brought about by the colonies disagreements with the rules introduced to them by their British leaders. These rules undermined them further and prevented them from being independent and they were tired and angry about this. They therefore started with revolts in some of the colonies which were ultimately copied and repeated in the rest of the colonies and this in turn led to the revolution which took place over a number of years.
They were totally opposed to these policies and they started uniting against the British colonialists as they knew that once unite, they could easily get their independence. The colonies also stopped providing money to the British government. The British government had used up most of its resources and even accumulated debt from the war and they needed money from the colonies to recover which was not forthcoming (Morton 41). They started rioting and mass protests to refuse the new policies England was imparting on them hence giving a hard time to the colonialists.
The point of no return was reached in 1763 after the seven year’s war. At this juncture, enough was enough with the oppression and the numerous Acts and laws and the revolution begun then. The point was reached at this time and not earlier because the population of American colonies at this time was over two million and this meant they had the numbers to stand up against the colonialists and persuade them for their independence or fight them for it. They had also garnered several string lawyers to argue for their cases against mistreatment by the British soldiers in the massacres that were taking place in Boston and this strengthened them (Hamilton 18). The war also united them and this unity made them a stronger team to fight the colonialists.
Conclusion
The American Revolution was a tie breaker for colonialism in America and other colonies. The strength and unity of Americans in conjunction with the weakening of the financial base of England is what enabled them achieve independence in 1776 after several years of revolution.
Work Cited
Frank, Andrew. American Revolution: People and Perspectives. New York: ABC-CLIO, 2008.
Hamilton, John. American Revolution: Road to War. New York: ABDO, 2013.
Morton, Joseph. The American Revolution. New York: Greenwood Publishing Group, 2003. Read More
Share:
Tags
Cite this document
(“American Revolution Essay Example | Topics and Well Written Essays - 500 words - 3”, n.d.)
American Revolution Essay Example | Topics and Well Written Essays - 500 words - 3. Retrieved from https://studentshare.org/history/1637503-american-revolution

CHECK THESE SAMPLES OF American Revolution

...?American Revolution number The development of contradicting opinions against the British Colonialists as dictated in the ancient colonialism was mainly based on the model of treatment accorded to by various individuals by the colonial masters. Some continents were filled with a diverse population of citizens who played as inhabitant of the region. The entry of the British colonialists paved way for the commencement of a series of colonies, a development that saw the introduction of categorization of people. Distinctive features were used to identify with the various categories of individuals, with each of the individuals sharing different opinions against the colonial masters. Body The indigenous...
10 Pages(2500 words)Essay

...the impending revolution. There was also another tax measure that was imposed on the American colonies which probably precipitated the War of Independence. This tax measure was called the Tea Act, the precursor of the famous Boston Tea Party, which gave the British company British East India Company to have a virtual monopoly on all teas that were exported to the American colonies (Yale Law Schol, 2008). This revenue measure was so unpopular that businessmen cancelled orders. The Massachusetts governor however was bent in imposing it and forced Boston harbor to receive the tea cargoes and to force payment for such goods. Finally, in the evening of December 16, 1773, sixty men disguised...
5 Pages(1250 words)Essay

...?American Revolution Revolution is usually defined as a forcible overthrow of a government or social order in favour of a new system Revolution also takes place with desire for independence. There are thinkers present in every society who give direction to the thought process of the society. Born in every era they shape the history of the country. American Revolution was guided by many such people who led the revolution from the front and made it successful. However the events that trigger the revolution are merely momentous and act as a trigger. Reasons for revolution get accumulated...
4 Pages(1000 words)Essay

...: "the omission of a bill of rights....providing clearly....for freedom of religion, freedom of the press, protection against standing armies, and restriction against monopolies." "A bill of rights is what the people are entitled to against every government on earth." With the increasing concern among political leaders and notable Americans towards the bill of rights, Congress proposed the Bill of Rights on September 25, 1789. The Bill of Rights was a result of the strong opposition of the anti-federalists and the fact that the constitution might endanger individual liberties. The ten amendments presented in the Bill of Rights became the first ten amendments in the US Constitution in 1791. The American...
3 Pages(750 words)Essay

...American Revolution American Revolution refers to war that resulted from conflict between the Americans and the Great Britain in the year 1775 to 17831. Before the battle started, the government had attempted to implement new ways of collecting more taxes from the colonies2. The colonies opposed the idea and argued that the government had never given them an opportunity to hold positions in parliament. The colonials therefore, decide to protest seeking the government to give them rights like any other individual in the country. A. Why did the colonists oppose the Sugar, Currency and Stamp acts when they had not rebelled against the Molasses Act?. The...
4 Pages(1000 words)Essay

...American Revolution The Stamp Act (1765), Townshend Tariffs (1767) and Tea Act (1773) were among the major contributing factors to the American Revolution (Foner 15). The British Authorities used the prior mentioned Acts to collect more revenue from the American colonists than what had been set. Majority of the colonists blamed little representation in Parliament as a causative agent to mistreatment. Even though the revolution was justifiable, was it really necessary? Did the war alter any cultural or religious orientation? The revolution was not inevitable because most Americans were after being...
1 Pages(250 words)Essay

...College: The American Revolution The American Revolution was a conglomerate of events that occurred within the years ranging from 1765 to 1783. Prior to 1963, the American capital was subordinate to the British capital and thus had to report back to England. One of the main reasons why the settlers wanted independence was the cost of the French and Indian wars for the British. They thus wanted to make colonists in the Americas to foot the cost and help in the payment. British policies introduced during the process of the revolution were intended to raise revenue to pay for the cost of the empire. The British policies caused divisions in...
5 Pages(1250 words)Essay
sponsored ads
Save Your Time for More Important Things
Let us write or edit the essay on your topic "American Revolution" with a personal 20% discount.
GRAB THE BEST PAPER

Let us find you another Essay on topic American Revolution for FREE!