Comments (0)
Add to wishlistDelete from wishlist
Cite this document
Summary
The paper runs just a bit over 4 pages but this is because the citations embedded in it take up more space than yours will when you insert your hard-text page numbers into the brackets, i.e. (Fresia, 54) for example, rather than mine (Ch4,Checks&Bal,para3).
…
Download full paperFile format: .doc, available for editing
HIDE THIS PAPERGRAB THE BEST PAPER93.4% of users find it useful 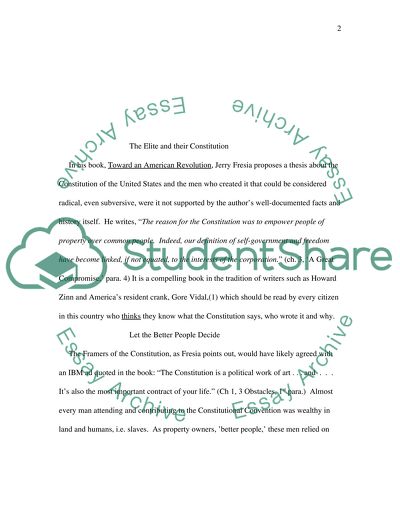 Download file to see previous pages He writes, "The reason for the Constitution was to empower people of property over common people. Indeed, our definition of self-government and freedom have become linked, if not equated, to the interests of the corporation." (ch. 3, 'A Great Compromise,' para. 4) It is a compelling book in the tradition of writers such as Howard Zinn and America's resident crank, Gore Vidal,(1) which should be read by every citizen in this country who thinks they know what the Constitution says, who wrote it and why.
The Framers of the Constitution, as Fresia points out, would have likely agreed with an IBM ad quoted in the book: "The Constitution is a political work of art . . . and . . . It's also the most important contract of your life." (Ch 1, 3 Obstacles, 1st para.) Almost every man attending and contributing to the Constitutional Convention was wealthy in land and humans, i.e. slaves. As property owners, 'better people,' these men relied on real and implied contracts to protect what they owned. A government that could not provide such protection would be no government at all.
to British entrepreneurs - Peers and Knights - the right to colonize and to make money from lands in the New World.(2) As Fresia makes clear throughout his book, this right to make money became a right to govern in the New World and eventually became justification for American landowners to sever ties with England and to create their own mercantile country.
What thes What these men of wealth and property wished to establish was a legal system, a government that protected their wealth. They did not wish to be subject to the whims of, as Rufus King put it, ". . . the poor and illiterate." (ch. 3, Ratification, end of 1st para). Indeed, James Madison, the 'Father of the Constitution,' wrote:
Landowners ought to have a share in the government,
to support these valuable interests, and to balance and
check the others. They ought to be so constituted as to
protect the minority of the opulent against the majority.
(Ch. 3, Checks & Balances, 2nd to last para.)
What has escaped many people in their understanding and reverence of The Constitution is that it is a document which was designed to secure the rights of the wealthy, the better people, while shutting out those without property or wealth. At the Convention of 1787, Alexander Hamilton put it succinctly when he said, "Give therefore to the first class [rich and well-born] a distinct, permanent share in the government. They will check the unsteadiness of the Second."(2) What he meant by Second was the masses or, as he once called them, "a great beast." (Ch 1, para 6)
Check the Balances
Of significant influence on the Constitution and the men who wrote it were the
political theories of British philosopher ...Download file to see next pagesRead More
Share:
Tags
Cite this document
(“American Revolution Plutocaracy or Democracy in TOWARD AN AMERICAN Essay”, n.d.)
Retrieved from https://studentshare.org/miscellaneous/1533627-american-revolution-plutocaracy-or-democracy-in-toward-an-american-revolution

“American Revolution Plutocaracy or Democracy in TOWARD AN AMERICAN Essay”, n.d. https://studentshare.org/miscellaneous/1533627-american-revolution-plutocaracy-or-democracy-in-toward-an-american-revolution.
Comments (0)
Click to create a comment or rate a document

...?American Revolution number The development of contradicting opinions against the British Colonialists as dictated in the ancient colonialism was mainly based on the model of treatment accorded to by various individuals by the colonial masters. Some continents were filled with a diverse population of citizens who played as inhabitant of the region. The entry of the British colonialists paved way for the commencement of a series of colonies, a development that saw the introduction of categorization of people. Distinctive features were used to identify with the various categories of individuals, with each of the individuals sharing different opinions against the colonial masters. Body The indigenous community had the agony of the grabbing...
10 Pages(2500 words)Essay

...﻿American Revolution: Republicanism and Democracy Introduction In the 18th century the American population was in a phase of revolution from democracy to republicanism. Republicanism meant protection of liberty and inalienable rights for all individuals alike, making the people a sovereign whole. It claimed that people should be free in performing their civic duties and should not be forced to do so by the government such as the forceful recruitment to the military during war. They were stepping away from democratic political system whereby the majority could infringe on the rights of the minority without the minority being able to defend themselves. Democracy is based on the majority rule such as voting for political representatives...
5 Pages(1250 words)Book Report/Review

rchitect of the Constitution, James Madison, believed a powerful federal government would posses enough power to ensure the freedom of minorities within the country. With the opposition from anti-federalists and noble American leaders, the Committee agreed to create amendments to the constitution, later known as the Bill of Rights. Considering the chain of events and the participation of all the principal Actors including George Washington and Thomas Jefferson in the process, the first ten amendments seemed to be a natural step in the American Revolution. One of the motivating factors behind the American Revolution was to ensure individual freedom and the Bill of Rights was the only way to ensure liberty of the citizens. The ten a...
3 Pages(750 words)Essay

...﻿American Revolution: Plutocracy or Democracy? Toward an American Revolution: Exposing the Constitution and Other Illusions is a piece of literature written by Jerry Fresia which holds many relevant and significant issues within its pages. Fresia presents a critical and radical overview of the United States’ revolutionary history, and he argues many different points, including the fact that this nation has failed to live up to its revolutionary promise and at the same time instead was captured by powerful plutocratic elites who governed the new nation’s various and different economic and political institutions. In order to better understand about the American Revolution, its factors, and the results that stemmed...
4 Pages(1000 words)Book Report/Review

... American Revolution American Revolution refers to war that resulted from conflict between the Americans and the Great Britain in the year 1775 to 17831. Before the battle started, the government had attempted to implement new ways of collecting more taxes from the colonies2. The colonies opposed the idea and argued that the government had never given them an opportunity to hold positions in parliament. The colonials therefore, decide to protest seeking the government to give them rights like any other individual in the country. A. Why did the colonists oppose the Sugar, Currency and Stamp acts when they had not rebelled against the Molasses Act?. The government never informed the colonies about the new changes to take place mainly...
4 Pages(1000 words)Essay

...The Cause of the American Revolution The American Revolution is widely documented and there are several schools of thought that seek to analyze and explain it as a phenomenon. A case in point concerns the causes of the war. Based on the available literature, it appears that there are two main positions that posit their respective explanations. The first of these maintains that the revolution is part of the logical development that culminated in the creation of the United States. The causes cited in this school include the emergence of American nationalism. Here, the imposition of tax, punitive initiatives and hostile reactions from the colony were only incidental. They served to incite the growing desire for self determination that has...
1 Pages(250 words)Essay

... American Revolution Introduction America was a British colony before 1776 when they gained independence. The British displaced the original residents of America which they previously called newfound land who were the Red Indians and occupied the area changing the culture to represent that of Europe. The Period between 1763 and 1783 saw the Americans fight the British soldiers in a bid to seek their independence in what was termed as the American Revolution (Frank 65). The paper will explore in detail and using examples the basic cause and nature of the American Revolution and why it took place at that particular time in history. The revolution took place as a result of accumulated grievances which the American people had had enough...
2 Pages(500 words)Essay

... American Revolution The Stamp Act (1765), Townshend Tariffs (1767) and Tea Act (1773) were among the major contributing factors to the American Revolution (Foner 15). The British Authorities used the prior mentioned Acts to collect more revenue from the American colonists than what had been set. Majority of the colonists blamed little representation in Parliament as a causative agent to mistreatment. Even though the revolution was justifiable, was it really necessary? Did the war alter any cultural or religious orientation? The revolution was not inevitable because most Americans were after being independent. They considered the British ruling to be unfair. All the peace deals they stroke with them always backfired and the Americans got...
1 Pages(250 words)Essay

... College: The American Revolution The American Revolution was a conglomerate of events that occurred within the years ranging from 1765 to 1783. Prior to 1963, the American capital was subordinate to the British capital and thus had to report back to England. One of the main reasons why the settlers wanted independence was the cost of the French and Indian wars for the British. They thus wanted to make colonists in the Americas to foot the cost and help in the payment. British policies introduced during the process of the revolution were intended to raise revenue to pay for the cost of the empire. The British policies caused divisions in the American colonist’s faction since they did not know which step of action to take. The French...
5 Pages(1250 words)Essay
sponsored ads
Save Your Time for More Important Things
Let us write or edit the essay on your topic "American Revolution Plutocaracy or Democracy in TOWARD AN AMERICAN REVOLUTION" with a personal 20% discount.
GRAB THE BEST PAPER

Let us find you another Essay on topic American Revolution Plutocaracy or Democracy in TOWARD AN AMERICAN REVOLUTION for FREE!