Was the American Revolution Moderate or Radical - Essay Example 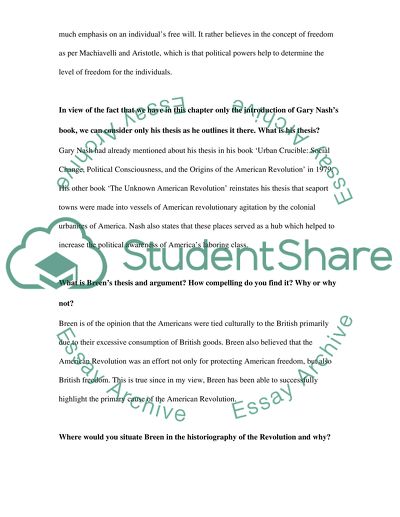 Extract of sample "Was the American Revolution Moderate or Radical"

CHECK THESE SAMPLES OF Was the American Revolution Moderate or Radical

...?American Revolution number The development of contradicting opinions against the British Colonialists as dictated in the ancient colonialism was mainly based on the model of treatment accorded to by various individuals by the colonial masters. Some continents were filled with a diverse population of citizens who played as inhabitant of the region. The entry of the British colonialists paved way for the commencement of a series of colonies, a development that saw the introduction of categorization of people. Distinctive features were used to identify with the various categories of individuals, with each of the individuals sharing different opinions against the colonial masters. Body The indigenous...
10 Pages(2500 words)Essay

...the impending revolution. There was also another tax measure that was imposed on the American colonies which probably precipitated the War of Independence. This tax measure was called the Tea Act, the precursor of the famous Boston Tea Party, which gave the British company British East India Company to have a virtual monopoly on all teas that were exported to the American colonies (Yale Law Schol, 2008). This revenue measure was so unpopular that businessmen cancelled orders. The Massachusetts governor however was bent in imposing it and forced Boston harbor to receive the tea cargoes and to force payment for such goods. Finally, in the evening of December 16, 1773, sixty men disguised...
5 Pages(1250 words)Essay

...: "the omission of a bill of rights....providing clearly....for freedom of religion, freedom of the press, protection against standing armies, and restriction against monopolies." "A bill of rights is what the people are entitled to against every government on earth." With the increasing concern among political leaders and notable Americans towards the bill of rights, Congress proposed the Bill of Rights on September 25, 1789. The Bill of Rights was a result of the strong opposition of the anti-federalists and the fact that the constitution might endanger individual liberties. The ten amendments presented in the Bill of Rights became the first ten amendments in the US Constitution in 1791. The American...
3 Pages(750 words)Essay

...American Revolution American Revolution refers to war that resulted from conflict between the Americans and the Great Britain in the year 1775 to 17831. Before the battle started, the government had attempted to implement new ways of collecting more taxes from the colonies2. The colonies opposed the idea and argued that the government had never given them an opportunity to hold positions in parliament. The colonials therefore, decide to protest seeking the government to give them rights like any other individual in the country. A. Why did the colonists oppose the Sugar, Currency and Stamp acts when they had not rebelled against the Molasses Act?. The...
4 Pages(1000 words)Essay

...American Revolution Introduction America was a British colony before 1776 when they gained independence. The British displaced the original residents of America which they previously called newfound land who were the Red Indians and occupied the area changing the culture to represent that of Europe. The Period between 1763 and 1783 saw the Americans fight the British soldiers in a bid to seek their independence in what was termed as the American Revolution (Frank 65). The paper will explore in detail and using examples the basic cause and nature of the American Revolution and why it took place at that particular time in...
2 Pages(500 words)Essay

...American Revolution The Stamp Act (1765), Townshend Tariffs (1767) and Tea Act (1773) were among the major contributing factors to the American Revolution (Foner 15). The British Authorities used the prior mentioned Acts to collect more revenue from the American colonists than what had been set. Majority of the colonists blamed little representation in Parliament as a causative agent to mistreatment. Even though the revolution was justifiable, was it really necessary? Did the war alter any cultural or religious orientation? The revolution was not inevitable because most Americans were after being...
1 Pages(250 words)Essay

...﻿The American Radical Introduction Stephen Crane’s ‘Do not Weep, Maiden, for War is Kind’ and Kate Chopin’s ‘Awakening’ advance American values of equality through showing how America has gone to a civil war and challenging the existing customs and morality that confined women to marriages. By asserting that ‘Do not weep, for the war is kind’ Crane articulates the need for ending slavery and discrimination in the society (Crane 7). In this case, Crane advocates for struggles in the fight for equality by asserting that ‘men were born to drill and die’ According Chopin, women desire both sexual and economic freedom, but their agitation for equality is thwarted by powerful and upper...
2 Pages(500 words)Essay

...College: The American Revolution The American Revolution was a conglomerate of events that occurred within the years ranging from 1765 to 1783. Prior to 1963, the American capital was subordinate to the British capital and thus had to report back to England. One of the main reasons why the settlers wanted independence was the cost of the French and Indian wars for the British. They thus wanted to make colonists in the Americas to foot the cost and help in the payment. British policies introduced during the process of the revolution were intended to raise revenue to pay for the cost of the empire. The British policies caused divisions in...
5 Pages(1250 words)Essay
sponsored ads
Save Your Time for More Important Things
Let us write or edit the essay on your topic "Was the American Revolution Moderate or Radical" with a personal 20% discount.
GRAB THE BEST PAPER

Let us find you another Essay on topic Was the American Revolution Moderate or Radical for FREE!