Comments (0)
Add to wishlistDelete from wishlist
Cite this document
Summary
The result of the industrial revolution was an increase in the working class people and so the problems associated with the stresses of working came up. Many working people experienced stresses of migration to urban centers, and the economic problems associated with it. This led…
Download full paperFile format: .doc, available for editing
HIDE THIS PAPERGRAB THE BEST PAPER93.2% of users find it useful 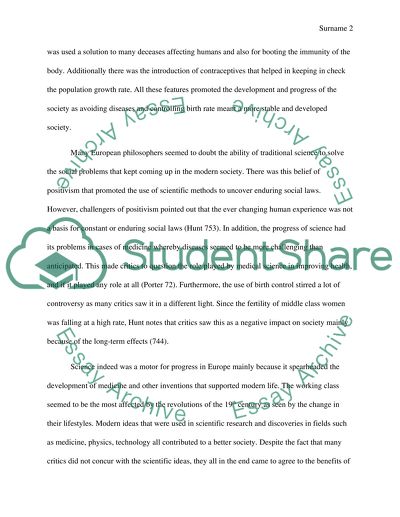 Science as a Motor of Progress The result of the industrial revolution was an increase in the working people and so the problems associated with the stresses of working came up. Many working people experienced stresses of migration to urban centers, and the economic problems associated with it. This led to the use of scientific approaches to solve these social problems. Science in this case became the motor for progress in Europe especially since it became the basis of the studies involving psychology, criminology, mental illnesses, and other social problems. Scientists like Sigmund Freud and Albert Einstein helped in the launching of modernism via the use of scientific and irrational methods that were new at that time (Hunt 753).
This modern era was characterized by new revolutionaries in science as scientists continued their research and discoveries. According to hunt, these discoveries came to shake the foundation of traditional scientific certainty as they posed a challenge to the widely accepted knowledge regarding the nature of the universe (754). At first, these new discoveries were not accepted well, but later on, people came to see their significance as they transformed the foundations of science. According to Porter, many achievements in the modern scientific sector made it easy to for medicine to be regarded as the motor and measure of progress (71). Medicine was used a solution to many deceases affecting humans and also for booting the immunity of the body. Additionally there was the introduction of contraceptives that helped in keeping in check the population growth rate. All these features promoted the development and progress of the society as avoiding diseases and controlling birth rate meant a more stable and developed society.
Many European philosophers seemed to doubt the ability of traditional science to solve the social problems that kept coming up in the modern society. There was this belief of positivism that promoted the use of scientific methods to uncover enduring social laws. However, challengers of positivism pointed out that the ever changing human experience was not a basis for constant or enduring social laws (Hunt 753). In addition, the progress of science had its problems in cases of medicine whereby diseases seemed to be more challenging than anticipated. This made critics to question the role played by medical science in improving health, and if it played any role at all (Porter 72). Furthermore, the use of birth control stirred a lot of controversy as many critics saw it in a different light. Since the fertility of middle class women was falling at a high rate, Hunt notes that critics saw this as a negative impact on society mainly because of the long-term effects (744).
Science indeed was a motor for progress in Europe mainly because it spearheaded the development of medicine and other inventions that supported modern life. The working class seemed to be the most affected by the revolutions of the 19th century as seen by the change in their lifestyles. Modern ideas that were used in scientific research and discoveries in fields such as medicine, physics, technology all contributed to a better society. Despite the fact that many critics did not concur with the scientific ideas, they all in the end came to agree to the benefits of science in making the society better. According to Walker, women were the major beneficiaries of this era as they got to take control of their reproductive health (794). All in all, science was the major contributor towards the progress of Europe because without it, it is possible that Europe would have taken a very different direction after the Industrial and the French revolution.
Works Cited
Hunt, Lynn. Making of the West, Volume II: Since 1500: Peoples and Cultures, Volume 2. New York: Bedford/St. Martins, 2012. Print.
Porter, Roy. “The Rise and Fall of the Age of Miracles.” History Today. November 1996: 69-75. Print.
Walker, Patrick. The Modern Age. 792-888. Print. Read More
Share:
Tags
Cite this document
(“Short response#5 Essay Example | Topics and Well Written Essays - 500 words”, n.d.)
Retrieved from https://studentshare.org/history/1620810-short-response5

CHECK THESE SAMPLES OF Short response#5

...?Short Story Response The Story of an Hour Introduction The Story of an Hour is written by Kate Chopin and the short story is about a sick wife (she had a heart problem) who thinks that her husband is not alive after the train accident. The sick wife, Louise Mallard, is immersed into her own thoughts of the newly found freedom. She gets so much obsessed with the newly found freedom. However, the freedom is short-lived after the supposed dead husband returns unexpectedly; Louise dies of a heart attack when she sees her husband whom she thought was dead. Kate Chopin uses various stylistic, structural, and symbolic tools to bring out the subject matter of the story. The...
5 Pages(1250 words)Book Report/Review

...In Key Concepts and their Application Ahearn s: 'We must shift our focus away from searching for definitive interpretations and instead concentrate on looking for information that constrains the type and number of meanings that might emerge from an eventIt is therefore the job of the anthropologist to identify these interpretative criteria in particular discursive events by looking for textual, temporal, sociocultural and spatial constraints on meaning.' (Ahearn: 57) Ahearn is at pains to divorce practice theorists definitions from her observations, using them as a guide rather than a mantra to understanding how the Junigau villagers themselves explain their society. For example she asks the Junigau villagers how they define... Key Concepts...
2 Pages(500 words)Essay

...home appeared to be a place of isolation, rejection and sadness, a place of abnormalities. As the girls moved away from the house they were able to show abandonment of the misguided feelings of abnormality and begin to show their true selves, that is, their ability to enjoy life in spite of struggles. The boys noted, “Up close the girls didn’t look depressed.” Apparently the boys expected the girls to be in continuous mourning for their dead sister. Importantly, on the night of the dance, the boys discovered that the girls were ready and willing to live. The girls had been reading books, learning about etiquette and everything this world had to offer, in short, the girls had been living. How did the information gained...
2 Pages(500 words)Essay

...Literary Response #5 Throughout Gwendolyn Brooks’ poetry a compelling portrait of black urban life emerges. For her work, Brooks won the Pulitzer Prize in 1950 and garnered the attention of Richard Wright, who described the way she captured black urban life as, "the pathos of petty destinies, the whimper of the wounded, the tiny incidents that plague the lives of the desperately poor, and the problems of common prejudice" (Watkins, pg. 1). Indeed, upon examining Brooks’ poetry, one is drawn to the subtle, yet ultimately powerful means by which she accomplishes this descriptive task. In Brooks’ poem ‘a song in the front yard’ she impressionistically compares her life and childhood as one of growing up the front yard. For Brooks... , and...
2 Pages(500 words)Essay

My Experience of Buddhist Mindful Meditation

...What is Philosophy? It is a general understanding to people that philosophy is merely a study or an intense field of the academe. That can be easilyseen due to the nature of philosophical studies in today’s educational system. Philosophical thinking is seen as something outside the daily affairs of people and life itself. It is funny how such is thought of since philosophy is really about life and existence. Kit Fine believes that philosophy is itself a huge paradox. Philosophy seeks to find truth, but is sometimes lost in wonder on its path. More importantly, philosophy is supposed to be essential in finding the relevance and meaning to life and existence yet it is not given much attention by society today. However... is Philosophy? It is a ...
1 Pages(250 words)Essay

...Short analysis and response paper on the photo, “Modonna and child souls in purgatory by Lucia Giordano” Introduction Thephoto is about the Virgin Mary, dressed in a red shawl and blue veil, holding a child and floating on an array of clouds above a group of souls in purgatory, who pursuit for her intercession for their freedom. Close, a putto clenches a brown scapular, a Carmelite, a sign of dedication to Mary (www.mfah.org). Initial response on this art photo The photo was positively received as it can be seen being stolen from the church in 1994, where it was kept and after six weeks, it was found with significant damage but was repaired, restored and returned to its original place...
1 Pages(250 words)Essay

...Showalter, Elaine. “Representing Ophelia: Women, Madness and the Responsibilities of Feminist Criticism”. Hamlet. Ed. Susanne Woford. Bedford ; St Martens, 1994. 220-240 The thesis intends to unravel the character of Ophelia, who has not really been a figure that enthuse the critics to the extent of other female literary characters although her presence could not be denied in different contexts whether in the paintings of Redon or the music of Bob Dylan. The author has tried to clarify the different shades of Ophelia’s character, when from the beginning she is depicted as “frailty” By Hamlet. The views expressed by Hamlet is more subjective than the real character of a woman and the author wonders whether the madness as expressed... by...
1 Pages(250 words)Essay

...wider. A company can not win the prize pool, but there are potential partners in the audience, maybe. As a rule audience in such kind of events is professional orientated and someone could be interested in your project, or your company may hear an interesting question and find a partner itself. So I think taking audience into account is important, so I will in my future career. The entire event was pretty much verbal: speakers from App software companies proclaimed speeches 10 minutes long and then answered jury’s questions, audience were listening and we all were wearing tag sticks on our chest with information we had put there etc. I was involved in nonverbal communication nodding as a response on verbal communication,...
2 Pages(500 words)Assignment
sponsored ads
Save Your Time for More Important Things
Let us write or edit the essay on your topic "Short response#5" with a personal 20% discount.
GRAB THE BEST PAPER

Let us find you another Essay on topic Short response#5 for FREE!