Comments (0)
Add to wishlistDelete from wishlist
Cite this document
Summary
President Andrew Johnson began implementing the reconstruction in May 1865, when the congress was out of session, and he did so in two proclamations. The first one was the amnesty proclamation whereby any southerner who took an oath of allegiance was granted amnesty, with…
Download full paperFile format: .doc, available for editing
HIDE THIS PAPERGRAB THE BEST PAPER93.4% of users find it useful 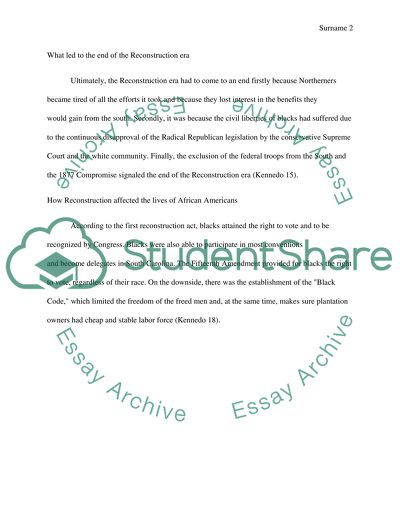 President Andrew Johnson’s approach to the task of Reconstruction President Andrew Johnson began implementing the reconstruction in May 1865, when the congress was out of session, and he did so in two proclamations. The first one was the amnesty proclamation whereby any southerner who took an oath of allegiance was granted amnesty, with the exclusion of wealthy landowners, Confederate officials and officers. Those who were not eligible for amnesty could appeal for a pardon. In the other proclamation, the President Johnson appointed governors on a provisional basis and gave the authority to establish state conventions (Kennedo 12).
How Congress reacted to Johnson’s measures during Radical Reconstruction.
The congress refused to recognize the senators and representatives, newly elected from the south as per Johnson’s application. The Congressional Joint Committee on Reconstruction came up the Fourteenth Amendment to the constitution. In addition, Congress enacted its own Reconstruction program which pushed for the Command of the Army Act, as well the Tenure of Office Act. With all this, Congress was able to push for impeachment of President Johnson (Kennedo 14).
What led to the end of the Reconstruction era
Ultimately, the Reconstruction era had to come to an end firstly because Northerners became tired of all the efforts it took and because they lost interest in the benefits they would gain from the south. Secondly, it was because the civil liberties of blacks had suffered due to the continuous disapproval of the Radical Republican legislation by the conservative Supreme Court and the white community. Finally, the exclusion of the federal troops from the South and the 1877 Compromise signaled the end of the Reconstruction era (Kennedo 15).
How Reconstruction affected the lives of African Americans
According to the first reconstruction act, blacks attained the right to vote and to be recognized by Congress. Blacks were also able to participate in most conventions and become delegates in South Carolina. The Fifteenth Amendment provided for blacks the right to vote, regardless of their race. On the downside, there was the establishment of the "Black Code," which limited the freedom of the freed men and, at the same time, makes sure plantation owners had cheap and stable labor force (Kennedo 18).
Work cited
Kennedo, Derell. "Politics of Reconstruction." Journal of U.S. History (2007): 11-18. Print. Read More
Share:
Tags
Cite this document
(“Describe President Andrew Johnsons approach to the task of Essay”, n.d.)
Retrieved from https://studentshare.org/history/1587858-describe-president-andrew-johnsons-approach-to-the-task-of-reconstruction-explain-how-congress-reacted-to-johnsons-measures-during-radical-reconstruction-what-led-to-the-end-of-the-reconstruction-era-how-did-reconstruction-affect-the-lives-of-afr

“Describe President Andrew Johnsons Approach to the Task of Essay”, n.d. https://studentshare.org/history/1587858-describe-president-andrew-johnsons-approach-to-the-task-of-reconstruction-explain-how-congress-reacted-to-johnsons-measures-during-radical-reconstruction-what-led-to-the-end-of-the-reconstruction-era-how-did-reconstruction-affect-the-lives-of-afr.
Comments (0)
Click to create a comment or rate a document

...-1870,” She is also highly complementary of the Black officials that served in the various reconstruction governments at the time. Corruption & Financial Mismanagement According to Wilson, corruption during the reconstruction era was almost entirely undertaken by the northern “adventurers” or “carpet baggers”. Wilson felt that excessive taxation was another method of overburdening the southern white and destroying the economy of the south. He further goes on to state that: “Taxes, of course, did not suffice. Enormous debts were piled up to satisfy the adventurers …. Treasuries were swept clean…” Woodson like Wilson accepts that acts of corruption were committed by “carpet baggers” as well as “negroes”. However, he is of the view... to assist...
4 Pages(1000 words)Essay

...and 15th amendments intended to grant Blacks more rights besides voting. For instance, Northerners during Lincoln’s regime felt the then incumbent president was extremely slow in effecting significant laws meant to make Blacks enjoy similar privileges like any other citizen. Therefore, they ended up pressuring the president though at his pace he was capable of seeing some plans towards Blacks’ freedom realized. However, Johnson who was his successor proved to be totally against Blacks’ freedom and the entire reconstruction process thus causing confusion besides making it less efficient. Therefore, Dubois was right when he termed efforts...
3 Pages(750 words)Essay

...Introduction Reconstruction in the South after the civil war was engineered by the presidents and the congress mostly comprised of the Radical Republicans. The most visible Reconstruction plans were those of Abraham Lincoln, Andrew Johnson and the Congress. Reconstruction began as early as 1863 before the end of civil war in 1865 and ended in 1877 after the compromise which saw Rutherford B. Hayes assume office and introduction of Jim Crow laws which strengthened and saw continuity of racial segregation fro the next 100 years. There were many challenges...
3 Pages(750 words)Essay

...President was calling for Confederate heads on a platter. According to Johnson, “Robbery is a crime; rape is a crime; treason is a crime; and crime must be punished. The law provides for it; the courts are open. Treason must be made infamous and traitors punished” (“Andrew Johnson”, 2007). Congress passed the Civil Rights Act of 1866, established the Freedmen’s Bureau intended to stop the lawmakers in the South from passing discriminatory legislation. President Johnson angered Radical Republicans by vetoing these laws but both were overridden by Congress which then rejected the...
2 Pages(500 words)Essay

...the burden to them. Du Bois passes no blame to the south for the hatred they had on black and understood their reason for such brutality, despite all that, the opinion of Foner is still regarded as a success and correct. Conversely, reconstruction was largely confined, limited, and conservative, and failed in enacting real change for the black people. Foner dismisses the idea that Dunning schools are ludicrous and took a middle stance between the post revisionist and revisionists. He failed to live up the beliefs and ideas he began with, rather it enacted radical changes to the society found in the south. Especially the unplanned move of black men to areas that are political and...
1 Pages(250 words)Essay

...sources. 3. Development of banks and financial institutions The banks offered loans that were sources of investment capital. Investors in the big businesses would seek assistance from banks to set up steel mills and railroads as part of the reconstruction. Stock markets were used by trusts such as Rockefeller’s to trade shares and purchase other corporations. 4. Lack of government interference The Federal Government did not regulate the operations and establishment of businesses. They were free to pool and set cartels that would increase competition opportunities. However, this factor led to the growth of monopolies in the steel, banking, and oil sectors. Free entry increased the...
6 Pages(1500 words)Essay
sponsored ads
Save Your Time for More Important Things
Let us write or edit the essay on your topic "Describe President Andrew Johnsons approach to the task of Reconstruction. Explain how Congress reacted to Johnsons measures during Radical Reconstruction. What led to the end of the Reconstruction era How did Reconstruction affect the lives of Afr" with a personal 20% discount.
GRAB THE BEST PAPER