Comments (0)
Add to wishlist Delete from wishlist
Cite this document
Summary
While driving, drivers spend more than a half of their time at the wheel on secondary activities, among which using their cell phones is the activity number one; and texting while driving results in 16 percent of fatal accidents which happen during one year. Overall, every…
Download full paper File format: .doc, available for editing
HIDE THIS PAPERGRAB THE BEST PAPER95.9% of users find it useful 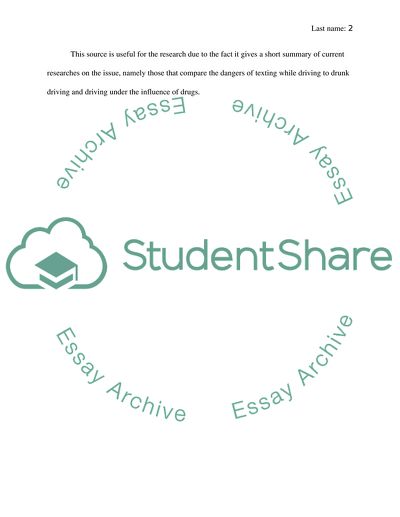 In accordance with the National Highway Traffic Safety Administration, driving and texting at the same time is about six times more dangerous than drunk driving.
While driving, drivers spend more than a half of their time at the wheel on secondary activities, among which using their cell phones is the activity number one; and texting while driving results in 16 percent of fatal accidents which happen during one year. Overall, every driver who texts while driving increases the possibility of a crash by twenty-three percent.
Also, Car and Driver Magazine conducted a study during which they compared how risky and dangerous texting while driving, reading messages while driving and drunk driving can be. The results showed that legally drunk drivers are the least dangerous ones compared to those who read text and messages while driving, and the most dangerous ones are those who text while driving.
In addition to this, drivers who texted appeared to be even more dangerous compared to those who were high on marijuana, as the Transport Research Laboratory in London reported.
In the United States, in ten states as well as in D. C., drivers are prohibited to use handled cell phones while driving; in 32 states and in D. C., novices re prohibited to use cell phones at the wheel, and in 39 states and D. C., drivers cannot use their gadgets to text.
This source is useful for the research due to the fact it gives a short summary of current researches on the issue, namely those that compare the dangers of texting while driving to drunk driving and driving under the influence of drugs.
Work Cited
Hopkins, K. "Is Texting While Driving More Dangerous Than Drunk Driving?." Distracted Driver Accidents. N.p. Web. 9 Apr 2015. . Read More
Share:
Tags
Cite this document
(“Annotated Bibiliography 8 Bibliography Example | Topics and Well Written Essays - 250 words”, n.d.)
Retrieved from https://studentshare.org/english/1687438-annotated-bibiliography-8

CHECK THESE SAMPLES OF Annotated Bibiliography 8

...? Annotated Bibliography ment of topic. The study of gender can be approached from many different angles and some of these are very obvious, such as the existence of double standards in the treatment of males and females in society, but others are more subtle. One area that is frequently discussed is that of the female body and how it is commercialized in modern American society. There are areas of communications studies, business studies, social science and linguistics which can illuminate this interesting area of research. Within that broad topic there is also the reality of women’s experience as they grow up and are socialized into a context where their appearance is problematized. Women are then doubly disadvantaged because they suffer...
4 Pages (1000 words) Research Paper

... 29 June Annotated Bibliography: How Legalizing Marijuana Would Affect My research question is: How would legalizing marijuana affect students? In particular, I want to know if this law will be good for students, by determining its possible effects on their health and academic welfare. Duarte, Rosa, Escario, Jose-Julian, and Jose-Alberto Molina. “Me, My Classmates and My Buddies: Analysing Peer Group Effects on Student Marijuana Consumption.” Education Economics 19.1 (2011): 89-105. Duarte, Escario, and Molina studied the effects of peer groups on consuming marijuana. Their hypothesis is that closer peer groups directly influence marijuana consumption. They used the results of the Spanish Survey on Drug Use in the School Population in 2004...
3 Pages (750 words) Essay

...? Topic: Business Management Purpose of the Bibliography This bibliography is designed to present sources in the field of business management and expose their limitations. It also introduces various concepts about business management, the theories that surround it and the different tools and practices implemented to enhance the growth and sustainability of businesses. However, besides this successful feature, some weaknesses have been observed in certain managerial techniques that constitute some inconvenience for companies. Annotated Bibliography Cakar, Figen, Umit S. Bititci, and Jillian MacBryde. “Spotlight on New Research: A Business Process Approach to Human Resource Management.” Business Process Management Journal 9.2 (2003): 190-208...
5 Pages (1250 words) Essay

...?Running Head: annotated bibliography Human Resource Development of the of the of the Brown, L, Murphy, E & Wade, V. (2006). “Corporate eLearning: Human Resource Development Implications for Large and Small Organizations” Human Resource Development International, vol.9, no.3, pp.415-427. With eLearning fast replacing traditional modes of learning in organizations due to cost efficiency, responsiveness, enhanced accountability and better use and sharing of information; significant improvements are visible in employee retention, performance, workplace behavior, service and attitude. However, perceptions of employees and managers towards eLearning differ in small and large organizations. By taking on both large and small enterprises...
8 Pages (2000 words) Essay

...Insert of E- Commerce: CK-E-LINK Company The business world has been undergoing serious changes regarding the competition on the various goods and services offered at different levels. Online business strategies are now the most convenient and robust way most businesses are going. E- Commerce reduces time wastage by the customers through the elimination of long waiting queues during service. This paper will examine the strategies for market development and product promotion through internet service provision for the CK-E- LINK Company, dealing in Chinese and Korean foods, clothing, and accessories operating and expanding. The paper will examine the eight stages of market development for e- businesses and explain how the company... of E-...
2 Pages (500 words) Research Paper

... While one group of people believes that the use of mobile phones should be banned, others believe that such law is unenforceable. The author of the article is working on the issue of passing legislation on the ban of using cell phones while driving to make the roadways safer and prevent a great number of accidents. Being shocked at the fact that texting while driving is banned only in a range of states, the author has developed a bill which introduces guidelines on the use of cell phones while driving. Today, with the evolution of technology, the number of people who use cell phones is increasing, and the number of situations when people use them tends to increase as well; driving a car should not be one of them, though. The bill...
1 Pages (250 words) Annotated Bibliography

... New Approaches to End Texting While Driving The issue of texting while driving is so serious that there has been introduced a new term for it, ‘intextication’, which is referred to a state when a person does not pay attention to surroundings because of being occupied with a cell phone. Intextication causes people to make mistakes, especially at the wheel; even the influence of alcohol is half as much dangerous as texting while driving. California Highway Patrol Officer Brian Pennings gives presentations for students of high schools on the danger of texting while driving because these days, teens tend to use their phones more while driving than take drugs or alcohol before driving. Such presentations include tests for students... New...
2 Pages (500 words) Assignment

Using cell phones while driving has serious consequences on the road: in driver distraction resulted in more than 3,000 people killed and more than 400,000 wounded. Also, it has been found that texting while driving creates risk 23 times worse than driving without distraction.
Today, Federal Communications Commission is working to educate inform the public about how dangerous distracted driving is. Also, the Commission is working on the development of technologies that could reduce the number of cases of distracted driving.
FCC has also created Distracted Driving Information Clearinghouse.
In addition to this, FCC gives links to information on state laws banning texting and wireless phones while driving.
Finally, the F...
1 Pages (250 words) Annotated Bibliography
sponsored ads
Save Your Time for More Important Things
Let us write or edit the annotated bibliography on your topic "Annotated Bibiliography 8" with a personal 20% discount.
GRAB THE BEST PAPER