Comments (0)
Add to wishlist Delete from wishlist
Cite this document
Summary
The objects of this assignment are “Irangeles: Iranians in Los Angeles” written by Ron Kelley, Jonathan Friedlander, and Anita Colby; “The Dance of the Rose and the Nightingale” written by Nesta Ramazani and “Why I Wrote Persepolis” written by Marjane Satrapi…
Download full paper File format: .doc, available for editing
HIDE THIS PAPERGRAB THE BEST PAPER97.9% of users find it useful 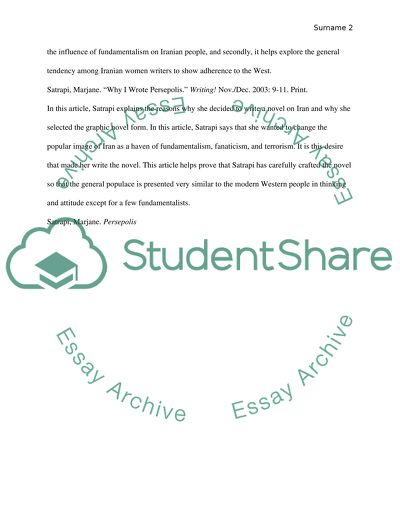 Extract of sample "The Main Issues Involved in Iranians"

﻿Annotated Bibliography Kelley, Ron, Jonathan Friedlander, and Anita Colby. Irangeles: Iranians in Los Angeles. Los Angeles: of California Press, 1993. Print.
In a novel format, this work is a combination of essays, interviews, and photographs of the Iranian immigrants in Southern California. The work shows how Iranian women in the U.S try to adopt the Western culture and to deny their Iranian roots. This works helps in explaining the general tendency among the Iranian women writers after the revolution to present themselves as liberal, freedom-loving, and democratic human beings who have nothing to do with terrorism and extremism. The work offers a lot of valuable insight into the cultural, ethnic, and religious diversity of Iranians and the ways they adopt to draw a balance between Iranian fundamentalism and American liberal thinking.
Ramazani, Nesta. The Dance of the Rose and the Nightingale. New York: Syracuse University Press, 2002. Print.
Nesta is another female contemporary of Satrapi. With an Iranian father and English mother, Nesta narrates her life in Iran before and after revolution. The writer faces a lot of pressure in the fundamental Iranian society, and manages to struggle through with luck and hard work. The work shows how Iranian, Islamic, and Western cultures collide, mingle, and influence the lives of people in Iran. The autobiography by Nesta is used in two ways. Firstly, it helps understand the influence of fundamentalism on Iranian people, and secondly, it helps explore the general tendency among Iranian women writers to show adherence to the West.
Satrapi, Marjane. “Why I Wrote Persepolis.” Writing! Nov./Dec. 2003: 9-11. Print.
In this article, Satrapi explains the reasons why she decided to write a novel on Iran and why she selected the graphic novel form. In this article, Satrapi says that she wanted to change the popular image of Iran as a haven of fundamentalism, fanaticism, and terrorism. It is this desire that made her write the novel. This article helps prove that Satrapi has carefully crafted the novel so that the general populace is presented very similar to the modern Western people in thinking and attitude except for a few fundamentalists. Read More
Share:
Tags
Cite this document
(“The Main Issues Involved in Iranians Annotated Bibliography”, n.d.)
Retrieved from https://studentshare.org/english/1663557-annotated-bibliography

“The Main Issues Involved in Iranians Annotated Bibliography”, n.d. https://studentshare.org/english/1663557-annotated-bibliography.
Comments (0)
Click to create a comment or rate a document

CHECK THESE SAMPLES OF The Main Issues Involved in Iranians

...? The Main Contemporary Issues Facing Catholic Schools Introduction The issues that nowadays arise from the catholic schools cannot be compared to those that happened two decades ago. This is applicable to catholic schools around the world. However, some of the buzzard issues are witnessed in the schools found in Australia. These issues can be classified into three different perspectives, which are administrative, doctrinal and political. If someone decides to look at the issues taking place in the catholic schools today and the entire world, it would be clear to understand that people have lost their way. The concept of administration looks at the conflict taking place between the state and the church. This can be explained...
10 Pages (2500 words) Essay

...?Ethical Issues Involved in Animal Testing Introduction There are a number of controversial issues that still pervade contemporary times. The controversiality of argument depends on the disparities of perspectives, not only of the opposing parties; but more so, on its overall effect to society or humanity. As it is, it could be an argumentative point to assert that if the value of the argument is ultimately premised on the benefit or wellbeing of humans, what about decisions that affect other living things, natural resources, or anything seen to affect human lives? It is this conceptual framework that leads to the argument: Is it unethical to test on animals, even if the testing helps save human lives? One is convinced that the rationale...
4 Pages (1000 words) Essay

Security issues involved with the transition of IPv4 to IPv6

... Security Issues Involved With the Transition of IPv4 to IPv6 In the present day, the internet is constantly developing to turn out to be useful to the users. It is utilized by many people from all forms of life in solving problems related to, social communication, banking and accounting needs and for providing information sources for research work. Business entities like companies and institutions of learning have computers with internet connection for the main reason of enhancing their communication process and association. Loughney in the IPv6 Node Requirements 2006 indicates that many people, as technology advances, ensure that they have internet connection in their homes for their desktop computers, laptops, smart phones or tablets...
3 Pages (750 words) Research Paper

... of driver assistive systems, which are currently being integrated into production vehicles. Psychologists like Dr. David Regan and Dr. Robert Gray are working towards understanding the issues arising from visual perception during motion. Only by understanding the visual and motor processes involved in collision creation and avoidance, can one achieve the ultimate goal of helping people use more effective and safer visual-motor control strategies (Gray, 2006). Works Cited Page Calvert, J.B. Vision and Colour. 5 April 2000, Last revised 4 November 2003. April 30, 2007.

...﻿HHE Report No. HETA-92-0073-2337 analysis 1. Ergonomic issues involved One of the leading ergonomic issues discussed in the report is the disclosure of the feeder on the BCS towards similar probable ergonomic risks. These risks reflect perils those feeders on ECA OCR machinery encountered. Apart from the likely perils aspects linked to sleeving and catering to stackers of the machinery, the sweeper on the ECA CBS also exhibited similar ergonomic risks as the sweepers on the ECA OCR. This posed another ergonomic issue that made all ECA feeders become exposed to similar risk aspects that did not cater to the supplementary roles performed by the DBCS feeder. Occasional support from the OCR sweeper did not decrease the monotony...
4 Pages (1000 words) Case Study

The Issues Involved in Succession Planning

Consequently, planning management succession becomes a prime requirement to ensure the right number and right kind of management staff at the right time and in the right positions for continued organizational vitality and strength. In simple terms, succession planning is an organizational process of pinpointing or selecting certain competent people as successors for key executive appointments like CEO, CMD, etc. after the expiry of terms of their current occupants and proactively planning their career moves in that direction.

This process is straightforward in a family business where the heirs are obvious and well known. However, in other organizations, succession planning is required to be a logical and well thought o...
7 Pages (1750 words) Research Proposal

Security is a major issue related to cloud computing. In this report, these issues related to cloud computing is looked at to analyze its present and find out its future prospects.  Cloud Computing can be stated as a term which describes a type of application as well as a platform. A cloud computing-related platform dynamically configures, reconfigures, provisions, and also de-provision servers as they are needed. Servers’ part of a cloud can turn out to be a virtual machine or a physical machine. Advanced level of cloud usually includes separate computing resources like Storage Area Networks (SANs), firewall, network equipment, and also other security-related devices. Cloud computing generally describes different ap...

People with Disability and Main Issues

...Introduction: Several issues have come up in recent years that gravely concern people with disability. Some of these matters include but not limited to ageing, social discrimination, healthcare, people with disability’s rights and a host of others. This paper investigates the three main issues, which are ageing, social discrimination and the basic rights for disabled people. The issues have affected the population of the people with disabilities in a number of ways: and the ways governments, private organizations and societies respond to the issues say a lot about how comfortable people with disabilities are among their non-disabled friends and colleagues. 1.0 Disability Issues and the Underlying Theoretical...
11 Pages (2750 words) Research Paper
sponsored ads
Save Your Time for More Important Things
Let us write or edit the annotated bibliography on your topic "The Main Issues Involved in Iranians" with a personal 20% discount.
GRAB THE BEST PAPER

Let us find you another Annotated Bibliography on topic The Main Issues Involved in Iranians for FREE!