Comments (0)
Add to wishlistDelete from wishlist
Cite this document
Summary
The present study “Staff turnover in Hong Kong's hospitality industry” is related to the existing state of hotel industry. The basic resources for this will be available from organizational handbooks, reports and reviews of the hotel industry in Hong Kong…
Download full paperFile format: .doc, available for editing
HIDE THIS PAPERGRAB THE BEST PAPER92.9% of users find it useful 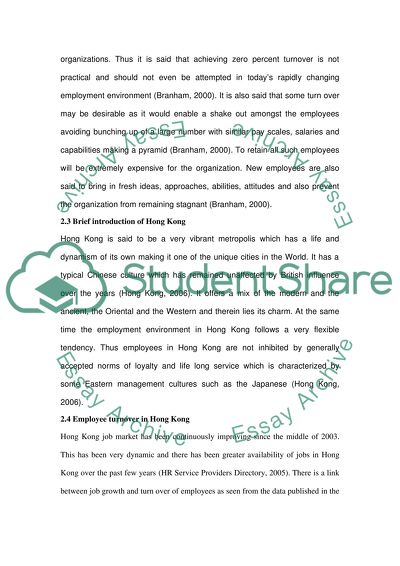 Download file to see previous pages The phenomenon of employee turnover is considered as one of the natural outcomes of conduct of business in modern organizations. Thus it is said that achieving zero percent turnover is not practical and should not even be attempted in today’s rapidly changing employment environment (Branham, 2000). It is also said that some turn over may be desirable as it would enable a shake out amongst the employees avoiding bunching up of a large number with similar pay scales, salaries and capabilities making a pyramid (Branham, 2000). To retain all such employees will be extremely expensive for the organization. New employees are also said to bring in fresh ideas, approaches, abilities, attitudes and also prevent the organization from remaining stagnant (Branham, 2000).
2.3 Brief introduction of Hong Kong
Hong Kong is said to be a very vibrant metropolis which has a life and dynamism of its own making it one of the unique cities in the World. It has a typical Chinese culture which has remained unaffected by British influence over the years (Hong Kong, 2006). It offers a mix of the modern and the ancient, the Oriental and the Western and therein lies its charm. At the same time the employment environment in Hong Kong follows a very flexible tendency. Thus employees in Hong Kong are not inhibited by generally accepted norms of loyalty and life long service which is characterized by some Eastern management cultures such as the Japanese (Hong Kong, 2006). ...Download file to see next pagesRead More
Share:
Tags
Cite this document
(“Staff Turnover in Hong Kong's Hospitality Industry Essay”, n.d.)
Retrieved from https://studentshare.org/tourism/1537252-staff-turnover-in-hong-kongs-hospitality-industry
(Staff Turnover in Hong Kong'S Hospitality Industry Essay)
https://studentshare.org/tourism/1537252-staff-turnover-in-hong-kongs-hospitality-industry.
“Staff Turnover in Hong Kong'S Hospitality Industry Essay”, n.d. https://studentshare.org/tourism/1537252-staff-turnover-in-hong-kongs-hospitality-industry.
Comments (0)
Click to create a comment or rate a document

In 2001 alone, the US reported earning from the industry close to two hundred billion US dollars. According to a previous study, the middle east tops the list as the largest exporters of crude oil taking over sixty-six percent of the global production of oil. Europe is the least producers of oil taking only two percent of the market share (Green, 4).
According to the American Association of Petroleum Geologists, the major problem facing the industry is lack of workforce and the increase in demand for oil. The report indicated that by 2030, the world’s oil demand is expected to increase from one hundred and three to one hundred and thirty million barrels per day. Natural gas, on the other hand, will expectedly increase t...
7 Pages(1750 words)Coursework
sponsored ads
Save Your Time for More Important Things
Let us write or edit the essay on your topic "Staff Turnover in Hong Kong's Hospitality Industry" with a personal 20% discount.
GRAB THE BEST PAPER

Let us find you another Essay on topic Staff Turnover in Hong Kong's Hospitality Industry for FREE!