Comments (0)
Add to wishlist Delete from wishlist
Cite this document
Summary
The paper delves on the political issues of Middle East nations. The paper focuses on religion as an influential factor in the region’s political scene. Religion and economics plays a vital role in Middle East political…
Download full paper File format: .doc, available for editing
HIDE THIS PAPERGRAB THE BEST PAPER92.4% of users find it useful 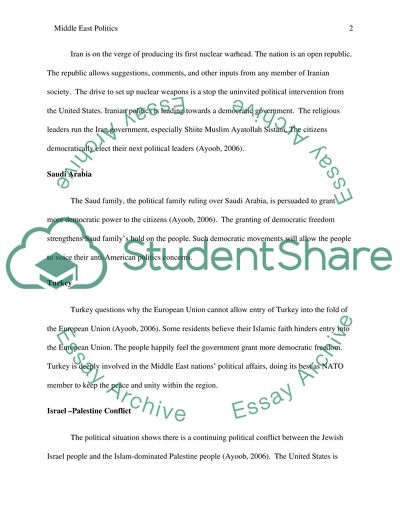 December 12, Middle East Politics Introduction Middle East Politics is grounded on religion and oil. The paper delves on the political issues of Middle East nations. The paper focuses on religion as an influential factor in the region’s political scene. Religion and economics plays a vital role in Middle East political management of the residents’ daily lives.
Economics
In terms of economics, the Middle East political scene is grounded oil production. The Middle East oil reserves can continue to supply more than 60 % of the world’s oil needs. The Persian Gulf oil reserves can deliver 62 percent of the world’s oil supply (Ayoob, 2006). The government uses oil money to uplift the lives of the residents.
Iraq
Iraq is an unstable political nation (Ayoob, 2006). The country is the threshold of breaking up between the people of both the Kurdish group and the Arab group. There is a continuing rift between Iraqi Sunni Muslims and Iraqi Shiite Muslims. The rift cropped up because Muhammad did not appoint his replacement (Hazleton, 2009).
Iran
Iran is on the verge of producing its first nuclear warhead. The nation is an open republic. The republic allows suggestions, comments, and other inputs from any member of Iranian society. The drive to set up nuclear weapons is a stop the uninvited political intervention from the United States. Iranian politics is leading towards a democratic government. The religious leaders run the Iran government, especially Shiite Muslim Ayatollah Sistani. The citizens democratically elect their next political leaders (Ayoob, 2006).
Saudi Arabia
The Saud family, the political family ruling over Saudi Arabia, is persuaded to grant more democratic power to the citizens (Ayoob, 2006). The granting of democratic freedom strengthens Saud family’s hold on the people. Such democratic movements will allow the people to voice their anti-American politics concerns.
Turkey
Turkey questions why the European Union cannot allow entry of Turkey into the fold of the European Union (Ayoob, 2006). Some residents believe their Islamic faith hinders entry into the European Union. The people happily feel the government grant more democratic freedom. Turkey is deeply involved in the Middle East nations’ political affairs, doing its best as NATO member to keep the peace and unity within the region.
Israel –Palestine Conflict
The political situation shows there is a continuing political conflict between the Jewish Israel people and the Islam-dominated Palestine people (Ayoob, 2006). The United States is persuading Israel to give up its control over the Gaza strip to Palestine, to reduce the conflict between Israel and Palestine, including Palestinians living within Israel’s territory (Gelvin, 2014).
Religion –based politics
Religion plays an important role in Middle East Politics (Ayoob, 2006). Political democracy is a growing trend in the Islam-dominated daily lives of the countries’ residents. Most of the nations are Islam-dominated. The Muslim countries include Turkey, Egypt, Tunisia, Morocco, Iran and Iraq. Government is based on the implementation of Sharia law. Democracy is in corporate in the political and religious agenda of many Muslim Middle East countries.
Conclusion
Based on the above discussion, both religion and economics affect Middle East politics. Oil exports affect Middle East decisions. Religious leaders control how the government controls the people. Evidently, religion and economics plays democratically important parts in the Middle East political environment, directly affecting the daily lives of the residents.
References:
Ayoob, M. (2006). The Middle East in 2025: Implications for U.S. Policy. Middle East Policy , 8 (2), 148- 162.
Gelvin, J. (2014). The Israel- Palestine Conflict. Cambridge: Cambridge University Press.
Hazleton, L. (2009). After the Prophet. New York: Knopf Doubleday Press. Read More
Share:
Tags
Cite this document
(“Middle East Politics Essay Example | Topics and Well Written Essays - 500 words”, n.d.)
Middle East Politics Essay Example | Topics and Well Written Essays - 500 words. Retrieved from https://studentshare.org/social-science/1671811-middle-east-politics

Politics of the Contemporary Middle East

...? Politics of the Contemporary Middle East (07.03.12) Introduction Amongst the most important elements relative to international relations in the Middle East region following the Gulf War of 1991 was the peace process between the Arabs and Israel that was sponsored by America. The two main parties in the Arab Israeli conflict were Israel and Palestine. This paper traces the development of the conflict and of peace negotiations between the PLO and Israel and attempts to find the reasons why the Oslo Peace Process of the 1990s failed to deliver the promise of a just and lasting peace between Israel and the PLO. The main developments of the peace process were the Oslo Peace Accord, its implementation, the summit at Camp David and the re...
12 Pages (3000 words) Essay

...?Middle East Politics The intrinsic relationship between religion and politics is greatly exposed by the developments in the Middle Eastern Politics and it is widely accepted that religious ideologies have been the basic factors affecting political ideologies in the region. There has been a long-lasting conflict in the Middle Eastern Politics between the ideology of Arab nationalism and the ideology of Islamic revival, which has incongruously added fuel on to the burning fire in the politics of this region. Significantly, the ideology of Arab nationalism was developed in the 1950s and 60s under the leadership of Gamal Abdel Nasser of Egypt and the Ba’ath Parties of Syria and Iraq. It is a nationalist ideology that celebrates the splendor...
3 Pages (750 words) Essay

Israel, Iraq and the USA in Middle East Politics Analysis

...? Israel, Iraq and the USA in Middle East Politics Analysis Lecturer Middle East Politics Analysis Among the many regions that have experienced numerous dynamics and events, the Middle East takes the lead. The constant revolution is multifaceted as varying issues are involved. One of the significant issues that make the Middle East to stand out is that the region is rich with vital natural resources and particularly fossil fuel. “These resources have influenced the dynamics, economic, political and social which took place in the region. Religious issues have also been a constant cause of conflict in these regions”.1 These problems of the region do not originate solely from the Middle East countries alone, as external interventions have...
5 Pages (1250 words) Essay

Politics of the Middle East

...﻿Politics of the Middle East Modernization Process and Middle East If modernization is the process of gaining control over physical environments, (Bill, p. 2) we can definitely argue that most of the Middle East people are modernized because of the marked developments in physical variables such as technology and economy (Bill, p.7) Democratic – Participatory societies enjoys liberty and security more than any other forms of political categories. Electoral politics, well defined judicial executive and legislature systems are the landmarks of a democratic society. Here judiciary can effectively control the executive power (bill, p.9).Historically, most of the Middle East countries were under dictatorship and tyranny. The intermediate power...
3 Pages (750 words) Essay

...Middle East Politics The book taken for consideration is The Great War of Civilization: The conquest of the Middle East by Robert Fisk and published by Knopf Publishing Group. 1. The Problem The problem taken by the author is one of Middle East History in the last 25 years; the political issues that let to a largely violent turn that was soon christened terrorism. The mercenaries who started as supporters of the west and slowly but steadily converted themselves to be anti US and UK. This problem is analyzed and presented with zest and reason. The book presents these problems adequately and explains the origins of the problems and how they got developed though it does not look at providing any solution for the issues. 2. Review...
4 Pages (1000 words) Essay

...HIS 342 Question Set 3 of the Name of the Concerned Professor October 24, 2008 HIS 342 Question Set 3 Authoritarian Regimes Politics in the Middle East always seems to vacillate between two distasteful options i.e. the fear of a ruthless domination by the authoritarian regimes that pathetically lack any vision or the possibility of a violent takeover by the puritanical opposition that is obviously radical or extremist in its moorings (Ghabra, 2003). After the fall of Communism, the masses in the Middle East were left with to inevitable options, either to choose authoritarian regimes that offered highly restrained levels of social...
10 Pages (2500 words) Assignment

...Middle East Crisis & The Role of International Communities Problems Faced by Middle Eastern Countries: Middle Eastern countries are faced by many problems and crisis today. These problems mainly revolve around their lack of political stability and conflicts between the Arab states and Israel over Palestine issue. This conflict is commonly known as “Arab-Israel conflict.” Palestine problem is the core issue that is faced by Middle Eastern countries in today’s world. Israeli-Palestinian Conflict: This conflict holds a sensitive issue in the region. The rise of this issue dates back to British dominance in the region which is recently followed by US influence and gaining control in Middle East. The main goal of this Anglo-American influence...
4 Pages (1000 words) Essay

Politics of the Middle East

... Day Month Year Politics of the Middle East – Mid Term Take Home Exam Part I When people think of the Middle East, they tend to think of a series of countries that are connected by a common religion and, therefore, they have a common thread to their way of life. While it may be true that significant majority of those in the Middle East believe and adhere to the principles of Islam, this does not mean, however, that each country has a similar culture. Culture is much more than simply a depiction of the religion in a region. Culture refers to a total way of life. This involves the landscape, or geography of country, political ideologies, language, climate, radical beliefs in terms of religion, food, and much more. Goldsmith Jr. (2010...
14 Pages (3500 words) Essay

Politics in the Middle East

...﻿Politics in the Middle East In a discussion relating to the politics of the Middle East, a reporter of ‘The Guardian,’ Ian Black in 2014 compiled a report that characterizes the region as one characterized by extreme violent. The whole region in each respective country is either facing an internal war or in conflict with another nation. Starting with Iraq, Black (2014) notes that the country is in a state of war for another time after conquered swaths territory fell to the hands of the Sunni jihads. In Syria, a country placed to Iraq’s next door, the country is in state of war with the government trying to fight Islamic terrorist group that declared the nation an Islamic State. These two nations serve as only a representative...
2 Pages (500 words) Essay
sponsored ads
Save Your Time for More Important Things
Let us write or edit the essay on your topic "Middle East Politics" with a personal 20% discount.
GRAB THE BEST PAPER

Let us find you another Essay on topic Middle East Politics for FREE!