Comments (0)
Add to wishlistDelete from wishlist
Cite this document
Summary
I agree with you on the point that Turks benefitted in some way from the political situation in the World War I era. The First World War definitely caused much destruction including the fall of the Ottoman Empire. The Ottoman Army fought in different continents and they were not just doing it for the Sultan but for the sake of protecting and saving their homeland…
Download full paperFile format: .doc, available for editing
HIDE THIS PAPERGRAB THE BEST PAPER93.2% of users find it useful 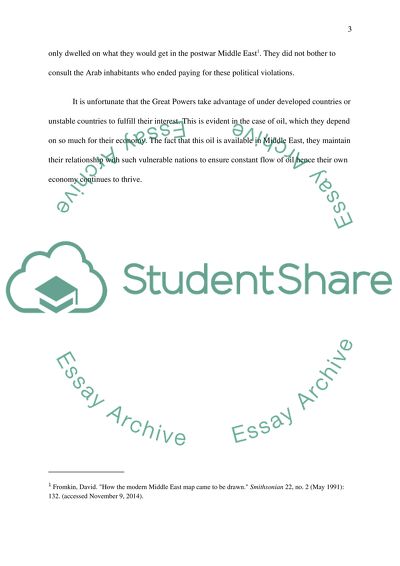 Response to Posting Response to Posting Will, I agree with you on the point that Turks benefitted in some way from the political situation in the World War I era. The First World War definitely caused much destruction including the fall of the Ottoman Empire. The Ottoman Army fought in different continents and they were not just doing it for the Sultan but for the sake of protecting and saving their homeland. It is interesting to note that the entire population of the Turks worked together without any discrimination to ensure that they built a new nation from the ruins. They not only got determination from the World War I but they also saw the importance of togetherness. The conflicts that contributed to the war had taught them the negative effects of dividing themselves basing on their differences. This, together with the rise of their leader, Mustafa Ataturk, enabled them work collaboratively hence the Modern Turkey.
Response to Posting 2
Richard,
This good post analyses the selfish nature of the Great Powers. It is good that you have mentioned the issue of the Great Powers and their interest in the Arab nations. I agree with you that there a number of negative implications attached to the same. The example you give on the creation of new states that was done for the interest of Great Britain and France is very relevant. They wanted to ensure they fulfilled their interest in the Middle Eastern oil. This example is good as it brings out the heightened selfish interest of these two powers that only dwelled on what they would get in the postwar Middle East1. They did not bother to consult the Arab inhabitants who ended paying for these political violations.
It is unfortunate that the Great Powers take advantage of under developed countries or unstable countries to fulfill their interest. This is evident in the case of oil, which they depend on so much for their economy. The fact that this oil is available in Middle East, they maintain their relationship with such vulnerable nations to ensure constant flow of oil hence their own economy continues to thrive.
Bibliography
Fromkin, David. "How the modern Middle East map came to be drawn." Smithsonian 22, no. 2 (May 1991): 132. Academic Search Premier, EBSCOhost (accessed November 9, 2014). Read More
Share:
Tags
Cite this document
(“Response to Students Posting Essay Example | Topics and Well Written Essays - 250 words”, n.d.)
Response to Students Posting Essay Example | Topics and Well Written Essays - 250 words. Retrieved from https://studentshare.org/social-science/1664990-response-to-students-posting

CHECK THESE SAMPLES OF Response to Students Posting

LEGAL FRAMEWORKS IN THE BUILT ENVIRONMENT

...Sources of Revenue for the Health Care Centers Response to La Deema Gallagher The argument developed by this is based on firm logical observation. It is indeed imperative for the health providing facilities to accurately identify the procedures, the patient has gone through. There is a profound interdependency, between the procedure of maintaining a record of treatments and billing procedure, however the periodical review of the effectiveness and efficiency of the record keeping process should be conducted, to debug the system if necessary (Cleverley & Cameron, 2007). Response to Nichole Bacovin As stated by Nichole Bacovine, the credentials of each patient with the proper maintained history of...
1 Pages(250 words)Assignment

...Market Share for Medical Facilities Response to LaDeema Gallagher Yes, it is absolutely right. Hospitals usually lack any permanent mean of income and they operate on the funds provided by insurance companies and government agencies, against the services and treatments, which these facilities provide to the patients. However it is painful to point out that only the people with a lot of money get the best treatment while others suffer through illness (Frank & Salkever). Response to Greg Bertke This student points out, toward the importance of market coverage with reference to the price advantage. This conclusion is ingenious indeed, because the large scale operations also assist the...
1 Pages(250 words)Assignment

Response to students' posting on Undercoding

...Under coding of Medical Treatments Response to Ginger Rappley The argument developed by this is based on the observation of a real situation,in which physicians do not record the procedures properly, the patient has undergone, because they are not paid for them. But this is a wrong practice, because in this way the costs against these treatments are not recorded, thus making the pricing of each treatment unrealistic (Fisher, et al., 1992). Response to Courtney Shaffer This is right, that physicians falsely estimate the cost of some medical processes to avoid penalties. However this undesirable practice is not helpful, because the remuneration of doctors is solely dependent on the costing of the treatment...
1 Pages(250 words)Assignment

...Response Dinesh Sah’s Post I believe that your first ment that ‘about three-fifths of the world practice democracy as their political governance system’ should be appropriately referenced. According to The Economist Intelligence Unit’s Index of Democracy 2010, “one-half of the world’s population now lives in a democracy of some sort” (Economic Intelligence Unit, 2010, p. 1). Regardless of the accuracy of the figures, your contentions of apparently diverse levels of understanding and comprehension on what constitutes democracy effectively provided the theoretical framework on the discussion regarding policy recommendations on climate action. Therefore, through the support of various articles on the...
1 Pages(250 words)Assignment

Inner conflict of Satan in Paradise Lost by John Milton

Hegemony In The Current World Order

...Responses to Posting Part Hi Jacob, I agree with you that the legislation d in section 5402 of IRTPA is very important. The example you have given on Los Zetas cartel adds more strength to the point. Aliens with military training from a terrorist organization can turn out to collaborate with terrorists by helping them in conducting terror attacks. It is sad that some Americans claim the laws put in place are too strict for the immigrants. As much as most of these immigrants come to do aid in jobs that natives find hard to do, I support your stand that immigration is more of a security issue than it is a social one. The injustice that happened on 9/11, the lives that were lost, as well as the crisis...
2 Pages(500 words)Essay

...Responses to Posting Posting Hi Lathaniel, I concur with you on the point that sometimes it is necessary to put ethics aside and cross the moral line in order to ensure security and protect the American populace. Considering the statement that to corner a criminal, one has to think like one, criminals have no rules or laws to abide to. In a case where there is no other option, the intelligence service personnel have to violate some laws when dealing with criminals such as terrorists1. The CIA is currently facing an ethical dilemma on whether killing some people for the greater good is worth it. As much as this is illegal, I support the claim that sometimes, the undercover agents have to do so since if they do not cross the line... , they will...
1 Pages(250 words)Essay
sponsored ads
Save Your Time for More Important Things
Let us write or edit the essay on your topic "Response to Students Posting" with a personal 20% discount.
GRAB THE BEST PAPER

Let us find you another Essay on topic Response to Students Posting for FREE!