Comments (0)
Add to wishlistDelete from wishlist
Cite this document
Summary
The paper "Apple Inc. and Samsung Electronics Co. Face off in Court" describes that Apple Inc. filed a suit against Samsung Electronics Co. after finding details that its patented software for rubber banding is allegedly copied in 21 Samsung smartphones. …
Download full paperFile format: .doc, available for editing
HIDE THIS PAPERGRAB THE BEST PAPER92.9% of users find it useful 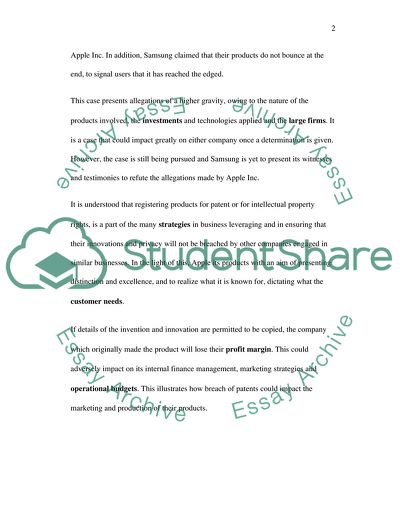 Extract of sample "Apple Inc. and Samsung Electronics Co. Face off in Court"

﻿Title: Two electronic giants face off in court
Source: Bloomberg
URL: http://www.bloomberg.com/news/2012-08-11/apple-executives-were-shocked-by-samsung-galaxy-witness-says.html
News Analysis:
Some of the products made and sold by Samsung are alleged to violate on the exclusive rights rights held by Apple Inc. This is said to occur through Samsung applying make and software exclusively licensed for Apple Inc.
Apple Inc. filed a suit against Samsung Electronics Co. after finding details that its patented software for rubber banding is allegedly copied in 21 Samsung smartphones. Through some witnesses whom it presented in court, Apple was able to demonstrate the business innovativeness applied by its competitor to copy and modify its patented software.
Apple asserted that Samsung made their devices so identical that customers could perceive those products, produced by Samsung, as made by Apple. A Research carried to this effect, based on witnesses’ testimonies indicated to the court that substantial number of consumers has confused Samsung tablet computers and smartphones as Apple products.
In response to the accusations, Samsung Electronics Co. Countered the claims, arguing that the technology applied on their Galaxy phones and Tablet computers require two fingers in scrolling as opposed to one finger technology applied by Apple Inc. In addition, Samsung claimed that their products do not bounce at the end, to signal users that it has reached the edged.
This case presents allegations of a higher gravity, owing to the nature of the products involved, the investments and technologies applied and the large firms. It is a case that could impact greatly on either company once a determination is given. However, the case is still being pursued and Samsung is yet to present its witnesses and testimonies to refute the allegations made by Apple Inc.
It is understood that registering products for patent or for intellectual property rights, is a part of the many strategies in business leveraging and in ensuring that their innovations and privacy will not be breached by other companies engaged in similar businesses. In the light of this, Apple its products with an aim of presenting distinction and excellence, and to realize what it is known for, dictating what the customer needs.
If details of the invention and innovation are permitted to be copied, the company which originally made the product will lose their profit margin. This could adversely impact on its internal finance management, marketing strategies and operational budgets. This illustrates how breach of patents could impact the marketing and production of their products.
Business is competitive leveraging to satisfy consumer’s wants and achieve company’s target. It is about earning the return of investment. It is an intellectual right. It is justified therefore to bring to court those who pirate products.
Response to Students posting
Achieving success in any business encompasses many of challenges, some of which may see an entrepreneur close down the business. However, resilience is one of the most important attribute of successful business people, in that one has to stick to the business and keep trying, even when it is on the verge of collapse. Change of business strategies, more so adopting different line of products or services to offer to the customers, which are not a common offer by the competitors, is a major plus towards a successful breakthrough in a business. For example, through adopting a sale of hamburger, as opposed to Barbeque which was a major offering by many restaurants, McDonald’s, which was a business on the verge of collapse reinstated its self and has managed to remain among the most successful business globally.
Work Cited
Rosenblatt, J. Apple’s Jobs Confronted Samsung over Galaxy, Witness Says, Bloomberg. 2012, p 1. http://www.bloomberg.com/news/2012-08-11/apple-executives-were-shocked-by-samsung-galaxy-witness-says.html Accessed: August 11, 2012. Read More
Share:
Tags
Cite this document
(“Apple Inc. and Samsung Electronics Co. Face off in Court Article - 1”, n.d.)
Apple Inc. and Samsung Electronics Co. Face off in Court Article - 1. Retrieved from https://studentshare.org/macro-microeconomics/1601455-writers-choice

“Apple Inc. And Samsung Electronics Co. Face off in Court Article - 1”, n.d. https://studentshare.org/macro-microeconomics/1601455-writers-choice.
Comments (0)
Click to create a comment or rate a document

CHECK THESE SAMPLES OF Apple Inc. and Samsung Electronics Co. Face off in Court

... Warrantless Searches The right to privacy is a constitutionally guaranteed right. The Fourth Amendment to the United s provides that “The right of the people to be secure in their persons, houses, papers, and effects, against unreasonable searches and seizures, shall not be violated, and no Warrants shall issue, but upon probable cause, supported by Oath or affirmation, and particularly describing the place to be searched, and the persons or things to be seized” (US Constitution). Thus, the United States Supreme Court held in Katz v. United States, 389 US 347, 357 that warrantless searches “are per se unreasonable under the Fourth Amendment – subject only to a few specifically established and well-delineated exceptions” (qtd. Acker...
13 Pages(3250 words)Case Study

Apple Inc. is thought to be among the most highly successful companies established in...

It also states that service is permitted outside Australia if the proceeding is based on a breach of contract committed in Queensland, regardless of where the contract was made and whether or not the breach was preceded or accompanied by a breach...rendering impossible the performance of a part of the contract that ought to be performed in Queensland.

Therefore, one must decide if the above situations apply in this case. Was the contract made in Queensland? The facts are that the contract was made in England – it was on Basdows standard form contract, and it was executed by Basedow in England. Therefore, the contract was drawn up in England and executed in England, and, after it was executed in Australia, it was faxe...
9 Pages(2250 words)Assignment
sponsored ads
Save Your Time for More Important Things
Let us write or edit the article on your topic "Apple Inc. and Samsung Electronics Co. Face off in Court" with a personal 20% discount.
GRAB THE BEST PAPER

Let us find you another Article on topic Apple Inc. and Samsung Electronics Co. Face off in Court for FREE!