Analysis of Mel Gibsons The Passion of the Christ - Essay Example

Comments (0)
Add to wishlist Delete from wishlist
Cite this document
Summary
It shows passion of Jesus with reference to the Gospel of Mathew, Luke, mark and John. The movie primarily covers the last 12 hours of the life of Jesus. It…
Download full paper File format: .doc, available for editing
HIDE THIS PAPERGRAB THE BEST PAPER97.8% of users find it useful 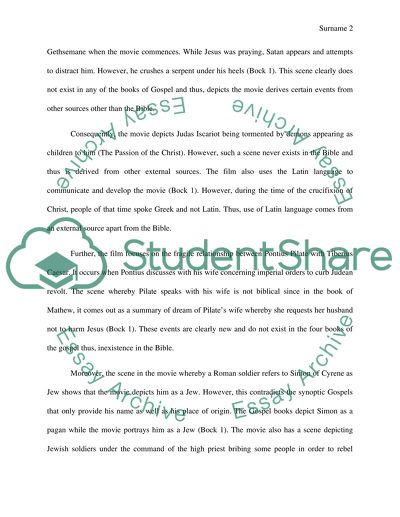 The Passion of the Christ The Passion of the Christ is a 2004 American drama movie directed by Mel Gibson and Jim Caviezel acting as starring. It shows passion of Jesus with reference to the Gospel of Mathew, Luke, mark and John. The movie primarily covers the last 12 hours of the life of Jesus. It starts from the Agony in the Garden of Gethsemane, the grievance and insomnia of the Virgin Mary, and finally ends with a succinct depiction of Jesus’ resurrection (The Passion of the Christ).
There are also many flashbacks of biblical scenes of Jesus’ early life with Mary; his mother, Jesus’ Sermon on the Mount, Jesus’ teaching the Apostle as well as the Last Supper. The movie has been controversial since its release (Bock 1). Some of the critics argue that the extreme violence in the film hampers delivery of its message. Others argue on the authenticity of non – biblical material used in the film. Moreover, some question the historical accuracy of the film as others argue on its portrayal of the Jews. However, this paper focuses on the argument on the extent by the film follows the books of gospel in New Testament.
The movie does not strictly follow the New Testament as revealed in the four Gospel books. This is because there are many incidences and events not covered within the Gospel books yet appear in the film. The first instance of controversies occurs in the Garden of Gethsemane when the movie commences. While Jesus was praying, Satan appears and attempts to distract him. However, he crushes a serpent under his heels (Bock 1). This scene clearly does not exist in any of the books of Gospel and thus, depicts the movie derives certain events from other sources other than the Bible.
Consequently, the movie depicts Judas Iscariot being tormented by demons appearing as children to him (The Passion of the Christ). However, such a scene never exists in the Bible and thus is derived from other external sources. The film also uses the Latin language to communicate and develop the movie (Bock 1). However, during the time of the crucifixion of Christ, people of that time spoke Greek and not Latin. Thus, use of Latin language comes from an external source apart from the Bible.
Further, the film focuses on the fragile relationship between Pontius Pilate with Tiberius Caesar. It occurs when Pontius discusses with his wife concerning imperial orders to curb Judean revolt. The scene whereby Pilate speaks with his wife is not biblical since in the book of Mathew, it comes out as a summary of dream of Pilate’s wife whereby she requests her husband not to harm Jesus (Bock 1). These events are clearly new and do not exist in the four books of the gospel thus, inexistence in the Bible.
Moreover, the scene in the movie whereby a Roman soldier refers to Simon of Cyrene as Jew shows that the movie depicts him as a Jew. However, this contradicts the synoptic Gospels that only provide his name as well as his place of origin. The Gospel books depict Simon as a pagan while the movie portrays him as a Jew (Bock 1). The movie also has a scene depicting Jewish soldiers under the command of the high priest bribing some people in order to rebel against Jesus. However, the bible discusses on how the Jews persuaded the crowd to speak ill of Jesus. The scenarios are not biblical and clearly illustrates that the film used other outside sources other than the bible in developing the film.
Additionally, The Passion of the Christ reveals that one of the thieves who were crucified with Jesus and who mocked him had a crow peck his eye out. Thus, the thief got punished by nature for mocking Christ. Consequently, the flashback in the movie shows Jesus making elevated four-legged furniture for a Roman (Bock 1). However, the two scenarios never exist in the New Testament gospel books and thus, are derived from an external source.
In conclusion, there are various scenes within The Passion of Christ, which are sourced outside the Bible. These have led to the emergence of controversies concerning the truthfulness of the movie. Thus, some critics argue that the movie does not vividly describe the last hours of Jesus in a truthful manner. However, despite presence of such events and scenes, it has minimal impact on the success as well as the intention of the film to humanity.
Works Cited
Bock, Darell. Interview by Beliefnet. You Cant Whitewash the Events of the Bible Beliefnet. n.p., 2014. Retrieved from web March 30, 2014 from http://www.beliefnet.com/Faiths/Christianity/2003/09/You-Cant-Whitewash-The- Events-Of-The-Bible.aspx
The Passion of the Christ. Dir. Mel Gibson. Perf. James Caviezel, Maia Morgenstern, Christo Jivkov, Francesco De Vito, Monica Bellucci. Newmarket Films, 2011. Film. Read More
Share:
Tags
Cite this document
(“Analysis of Mel Gibsons The Passion of the Christ Essay”, n.d.)
Retrieved from https://studentshare.org/religion-and-theology/1636091-analysis-of-mel-gibsons-the-passion-of-the-christ

(Analysis of Mel Gibsons The Passion of the Christ Essay)
https://studentshare.org/religion-and-theology/1636091-analysis-of-mel-gibsons-the-passion-of-the-christ.

“Analysis of Mel Gibsons The Passion of the Christ Essay”, n.d. https://studentshare.org/religion-and-theology/1636091-analysis-of-mel-gibsons-the-passion-of-the-christ.
Comments (0)
Click to create a comment or rate a document

The Passion of the Christ

...?Full The Passion of the Christ Mel Gibson’s “The Passion of the Christ” portrays the last twelve hours of Jesus Christ before his death starting from the garden of Gethsemane where he has been praying to God and struggling with his personal desire that the hardships he was about to experience would be taken away from him. Knowing the danger he was in, with Judas betraying him to the Sanhedrin, Jesus then said in his prayer that not his will but God’s will be done. With this resolved, he gets up to face his captors and accusers in the presence of the high priest Caiaphas who tried to find a reason for Jesus to be put to death. His sufferings then start from henceforth with the soldier spitting on him and physically hitting him, his...
4 Pages (1000 words) Essay

... Religion and Theology Topic: Boff’s Jesus Christ, Liberator and Cone’s The Cross and the Lynching Tree Jesus Christ, the Liberator: A Critical Christology for our Times—Leonardo Boff. 1. Leonardo Boff is a participant of the theology movement of Latin America. He has to his credit some original theological concepts, but by and large, he is a part of the increasingly sophisticated liberation theology movement. But this liberation aspect is about the interpretation of the ground realities and the remedial measure necessary to challenge them. Leonardo Boff argues, “Each generation must answer, within the context of its own understanding of the world, of the human person, and of God.”(1) Liberation does not question the fundamentals...
11 Pages (2750 words) Book Report/Review

The Passion of the Christ (2004): Comparison to the Gospels

... Mel Gibson’s Apocalypto Mel Gibson’s Apocalypto is a story narrated about the ancient Maya people and their ical history, apeople who lived for more than a thousand years in a delicate tropical environment. The film depicts the violent and blood loving Maya people who used to offer human blood sacrifices, with great intensity of violence. The film is a story of a young character that has been captured for sacrifice and is forced to march to the putrid city, but escapes and endures utmost brutality in the tropical jungle. Largely, the film portrays Gibson’s skills in cinematic and storytelling; it portrays beautiful narration of events only possible through the Hollywood blockbusters. However, the film by Gibson does not indicate any...
3 Pages (750 words) Essay

... of blasphemy. Mother Mary expresses her affection for Jesus through various acts of love Thus Jesus Christ sacrificed his life leaving one message for all of us to follow: LOVE THY NEIGHBOUR References Bruce Davey, Mel Gibson, Enzo Sisti (Producer). Mel Gibson (Director). (2004). Passion of Christ [Motion picture]. USA: Icon productions. The Mathew, The Mark, The Luke and The John. Chapters of The Bible. Wikipedia. (27 Jan. 2008). Bible-Wikipedia, the free encyclopedia. Retrieved Jan. 27, 2008 from
2 Pages (500 words) Essay

A comparative analysis of Shakespeares Hamlet and Mel Gibsons Portrayal

...A Comparative Analysis of Shakespeare's Hamlet and Mel Gibson's Portrayal The character of Hamlet, both in Shakespeare's play and in Mel Gibson's portrayal in the film, is a youth beset by injustice and indecision. In adapting the play for cinema, certain liberties have been taken however, for better or worse. The most obvious discrepancy is the age difference: for Hamlet to fit into his period role he could have ranged from the age of 13 to possibly as old as 21. Gibson, to be generous, is at least 28. On the other hand, Shakespeare's mention of rapier and dagger for the final duel is probably more Elizabethan in time, while the film attempts a more period placement by the use of single and two handed broadswords, as well as short...
6 Pages (1500 words) Essay

The Passion of the Christ

... are multiple and one must see this movie several times before actually seeing them all. The fill maker uses cliché to comment upon the use of cliché, especially in western movies, and he uses extremes of bigotry and elitism to point out how ridiculous these are in our society. He puts together the common limited views of people, especially minorities, in order to point out how silly it is to judge any group as a whole. Even the bad guys may not fit the mold of bad guys. Mel Gibson took the ideas for humor to an extreme not seen before in film and may have actually started a new genre of spoof with Blazing Saddles. It is not as easy as it appears to spoof whole film genres or other groups, and it is often not understood. Starship Troopers...
10 Pages (2500 words) Movie Review
sponsored ads
Save Your Time for More Important Things
Let us write or edit the essay on your topic "Analysis of Mel Gibsons The Passion of the Christ" with a personal 20% discount.
GRAB THE BEST PAPER

Let us find you another Essay on topic Analysis of Mel Gibsons The Passion of the Christ for FREE!