Comments (0)
Add to wishlistDelete from wishlist
Cite this document
Summary
This case study provides more insight into the background of Ted Bundy, with special emphasis on the hypothesis that his murderous behavior may have been somewhat set off by his difficult childhood. At the same time, the case study employs some criminal behavior theories…
Download full paperFile format: .doc, available for editing
HIDE THIS PAPERGRAB THE BEST PAPER95.6% of users find it useful 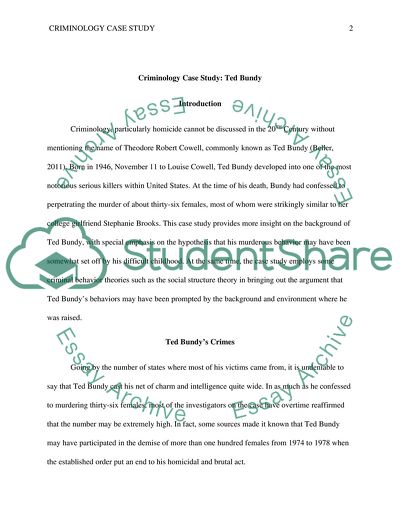 Download file to see previous pages Going by the number of states where most of his victims came from, it is undeniable to say that Ted Bundy cast his net of charm and intelligence quite wide. In as much as he confessed to murdering thirty-six females, most of the investigators on the case have overtime reaffirmed that the number may be extremely high. In fact, some sources made it known that Ted Bundy may have participated in the demise of more than one hundred females from 1974 to 1978 when the established order put an end to his homicidal and brutal act.
At the time of his sentencing, the authorities strongly believed that Ted Bundy was responsible for the disappearance of young female girls in Washington, Idaho, Colorado, Vermont, and Utah. The only set back nevertheless was the fact that they were unable to patch up strong evidence to file against Bundy, as some of the victims’ bodies were not recovered and have never been since then (Dye, 2015). Ted Bundy’s acquaintances and relatives have reiterated in the past that whereas he faced some challenges while growing up, they did not witness any exceptionally precarious sign that would have pointed out the vicious act in him. This is essential because he lived a fairly normal life until the year 1974 when he cut off all contacts and began the monstrous deed.
Come to think of it, what might have made an individual who effectively went through the American education system find pleasure in raping and beating young and industrious females to death? According to the Federal Bureau of Investigations (FBI), ...Download file to see next pagesRead More
Share:
Tags
Cite this document
(Criminology: Ted Bundy's Crimes Case Study Example | Topics and Well Written Essays - 1750 words, n.d.)
Criminology: Ted Bundy's Crimes Case Study Example | Topics and Well Written Essays - 1750 words. Retrieved from https://studentshare.org/professional/1875458-criminology

...?Introduction Ted Bundy is a serial killer who is perhaps the famous that has ever lived. That said, Bundy defies explanation or profiling. He has none of the hallmarks put forth by some profilers, that is that killers are made because of brain damage, abuse and mental illness. He was organized in some killings, profoundly disorganized in others. Nothing in his childhood seemed horrible enough to create the man that he was. Bundy was able to establish relationships, one that went on for years, and was able to fool just about everybody he knew into thinking that he was the model citizen. Among these people was Ann Rule, the popular true crime writer, who believed, for years, that Bundy was not capable of the crimes for which he was accused...
9 Pages(2250 words)Research Paper

...? Ted Turner Table of Contents Introduction 3 Thesis ment 3 Ted Turner- Leadership Approach and Style 4 Conclusion 7 Works Cited 8 Introduction The project seeks to bring forth the leadership qualities of Ted Turner, who is a businessman and founder of CNN, the Cable News Network. CNN, which is the first twenty four hours cable news channel, was initiated through the founding of WTBS, which was the pioneer in the concept of cable television. Besides being a businessman, he is also known for being a great philanthropist who provided an amount of $1 billion to the United Nations which created the foundation of the organization. Known for being a great leader, Turner received the Bower Award from the Franklin Institute for Business Leadership...
6 Pages(1500 words)Research Paper

...? Ted Bundy Lecturer It baffles many how an individual you have known for years as a friend or family man confesses to heinous crimes in graphic details. Most are the times that we are inclined to defend those accused of such crimes based on the relationship we have built over the years. However, minute details and traits about an individual’s personality are critical in defining who they are beyond the public front that they claim. Such identifies the thin line between being suspicious and remaining naive about a person suspected of being a serial killer. Most of those that turn out as murderers and serial killers have underlying traits that are beyond the rapport created. While it is not definitive pointer to a killer, extreme anti...
5 Pages(1250 words)Research Paper

...?Introduction Ted Bundy was a serial killer, kidnapper, rapist and necrophile hailing from America. He was accountable for killing and murdering girls along with young women during the period of 1970s. He was also responsible for carrying out numerous instances of homicides that numbered to 30 in several states of America throughout the period 1974-1978. He was quite charismatic in nature for which the victims easily got trapped under him. He was able to perform such hideous crimes as he possessed the ability to lure his female victims into his trap. Most hideous crimes that reflected from his part were the serial killing of the female victims in the most inhuman and torturous manner. Serial killer is defined as an entity or a person who...
9 Pages(2250 words)Research Paper

Bundy expressed unusual fascination to knives at a tender age of three. During his teenage years, Ted was well behaved, attractive and performed well in school despite his meager surroundings and parental circumstances. From High school, he joined the University of Paget Sound where he felt uncomfortable with his wealthy peers but still performed well academically. He later transferred to University of Washington because of his uncomfortable feeling at Paget Sound caused by his financial inadequacy. The signs of his dark side were seen during his teenage years. Ted liked to peer through other people’s windows but not with the intent of stealing from them. In High School, his shyness led him to be socially awkward. Although he had...
4 Pages(1000 words)Essay

... in college, worked for the Republican Party, and volunteered at a suicide prevention hot line. One of the workers at the suicide prevention hot line was Ann Rule. Ann Rule is a famous true crime writer, but more importantly was once a police woman. Ann trusted Ted implicitly. She trusted Ted so much, that spent night after night locked in an upper office answering phones with him (Rule, 35). She was one of the few women to trust Ted Bundy and survive. Around the time Ted began college, joined the Republican Party, and answered calls with Ann Rule, he met the love of his life. This woman partly triggered something evil in Ted. She had long brown hair parted in middle, a common hairstyle in the sixties. When the woman, Stephanie...
6 Pages(1500 words)Essay

Ted Bundy: Outline Introduction Brief biography of Ted Bundy a. He was born on November 24, 1946 and died on January 24, 1989 from execution b. Earlylife - being raised by his grandparents, never knowing who his father was, and
believing his mother was his sister
c. During his time in University, he broke up with his girlfriend; weeks later, he began his
murderous rampage
After the first murder, he continued to kill, usually raping and torturing his victims
Murders
It is unknown when Bundy first began to kill someone, though those involved in his case believed it had been in his late teens; there is no proof to this, however, just coincidences involving the death of a girl near his home when he was only 1...
2 Pages(500 words)Essay

In his tender age, he understood that his biological mother was his sister. That is when they were staying in Philadelphia. With his mother whom he never knew as a mother but a sister, they later moved to Talcom, Washington with their relatives. Their last family name was later changed to Nelson. He was afterward adopted by Jonny Bundy.
In high school and in college, he knew about himself as a bad boy and moved on to use this character as his stronghold. His bad characters were influenced by pictures that only reflected sex and violence. These pictures were mainly from the celebrities that were very well known to him.
According to trusted sources, he had already committed several crimes before he finished high school. The...
6 Pages(1500 words)Case Study

Like many aspects of Ted Bundy, which remain a puzzle, who his father remained elusive. Ted Bundy was born as Theodore Robert Cowell on November 24, 1946, at the Elizabeth Lund Home for Unwed Mother’s, to Eleanor Louise Cowell. Having an illegitimate could give rise to social; stigma in those days and so his maternal grandparents created the impression that he was their child and that his mother and her sister were really his sisters. The truth that the woman he considered his sister was really his mother was not known to him in his early days and he discovered this truth only when he was at high school or during his early period at college.
Who his father was will probably be never known. The reason for this lies in...

7 Pages(1750 words)Research Paper
sponsored ads
Save Your Time for More Important Things
Let us write or edit the case study on your topic "Criminology: Ted Bundy's Crimes" with a personal 20% discount.
GRAB THE BEST PAPER

Let us find you another Case Study on topic Criminology: Ted Bundy's Crimes for FREE!