Comments (0)
Add to wishlistDelete from wishlist
Cite this document
Summary
To the hard-boiled economist, consumer spending is the motive force, the dynamics of development. The wider the consumer market unhinged by the economy, with more people buying non-essential and luxurious goods, the more advanced and viable that economy is…
Download full paperFile format: .doc, available for editing
HIDE THIS PAPERGRAB THE BEST PAPER99% of users find it useful 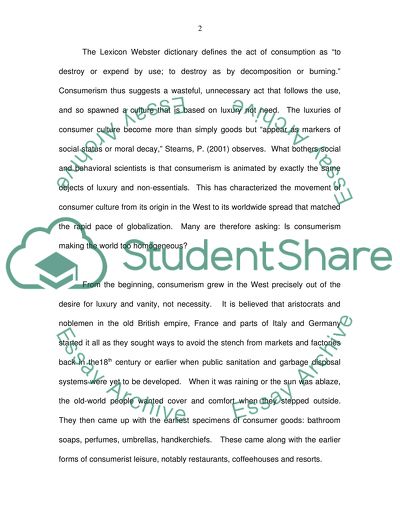 Download file to see previous pages The Lexicon Webster dictionary defines the act of consumption as "to destroy or expend by use; to destroy as by decomposition or burning." Consumerism thus suggests a wasteful, unnecessary act that follows the use, and so spawned a culture that is based on luxury not need. The luxuries of consumer culture become more than simply goods but "appear as markers of social status or moral decay," Stearns, P. (2001) observes. What bothers social and behavioral scientists is that consumerism is animated by exactly the same objects of luxury and non-essentials. This has characterized the movement of consumer culture from its origin in the West to its worldwide spread that matched the rapid pace of globalization. Many are therefore asking: Is consumerism making the world too homogeneous
From the beginning, consumerism grew in the West precisely out of the desire for luxury and vanity, not necessity. It is believed that aristocrats and noblemen in the old British empire, France and parts of Italy and Germany started it all as they sought ways to avoid the stench from markets and factories back in the18th century or earlier when public sanitation and garbage disposal systems were yet to be developed. When it was raining or the sun was ablaze, the old-world people wanted cover and comfort when they stepped outside. They then came up with the earliest specimens of consumer goods: bathroom soaps, perfumes, umbrellas, handkerchiefs. These came along with the earlier forms of consumerist leisure, notably restaurants, coffeehouses and resorts.

The Americans later picked up the idea to set off what became known as the second stage of consumerism, giving birth to the department store as the new venue for consumption. As the department stores competed for the favors of the growing consumer market, advertising emerged as the chief apparatus of consumerism. With the advent of mass production and the free market concept in the early 20th century, consumerism really took off with the coming of new consumer goods (automobiles, bicycles, food) and consumer leisure (movies, spectator sports). Consumer culture also became an integral part of celebrations like holidays, birthdays.
Stearns, P. (2001), who looks at the development of consumerism as one of the greatest changes in the human experience, puts forth the theory that the consumerist society came into being in the 18th century "through a complex web of factors, including an increase in wage earnings, a desire and opportunity to emulate the rich, and a need for goods of value to compensate for the coordinates of identity lost with the passing of a stable, rural way of life." This jibes with the modern sociological view that man is by instinct a creation that desires to be in the swim of things, to look successful and lavish.
As Western culture brought consumerism along in its spread to all parts of the world, consumers everywhere behave in basically the same manner: they buy goods that they don't need for subsistence but as a means of "demonstrating modest achievement in new ways." The goods themselves come from the same mold, identical in every ...Download file to see next pagesRead More
Share:
Tags
Cite this document
(“Consumer Culture Essay Example | Topics and Well Written Essays - 1750 words - 1”, n.d.)
Retrieved from https://studentshare.org/people/1516287-consumer-culture

CHECK THESE SAMPLES OF Consumer Culture

Importance of Consumers – Focus on the fact that it is the customers that make the purchases, and this role of the customer is that crucial element which actually converts all the promotion plans, cost reducing and quality improving activities, advertising of the brand etc into profits for the organisation. Therefore final objective of all marketing strategies and activities is to make the consumer buy the...
8 Pages(2000 words)Assignment

Both company culture and technology has a great impact on the hospitality industry. The company culture affects the behavior of the employees in an organization. The employees of the company are the one who deals with the customers of this industry. So the behavior of the employees to the customers is affected greatly by the working environment or the organizational culture they get. Similarly, technology too has a gr...
6 Pages(1500 words)Research Paper

Let us find you another Essay on topic Consumer Culture for FREE!