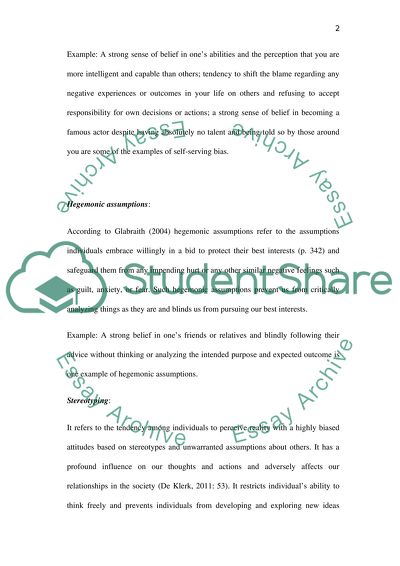 Extract of sample "The Barriers of Critical Thinking"

Barriers to critical thinking There are various barriers to critical thinking identified and put forward by a diverse body of researchers, theorists and scholars. This includes lack of relevant background information, poor reading skills, bias, prejudice, superstitions, ego-centricism (self-centered thinking), socio-centricism (group centered thinking), peer pressure, conformism, provincialism, narrow-mindedness, close-mindedness, distrust in reason, relativistic thinking, stereotyping, unwarranted assumptions, scape-goating, rationalization, wishful thinking, selective perception, overpowering emotions, self-deception, fear of change etc (Bassham et al., 2005: 11; Cornell et al., 2011). Some of these barriers are discussed briefly as follows:
Self-serving bias:
Self-serving bias refers to the tendency of individuals to elevate the perception of self in a manner that helps them in protecting their self-esteem. This concept entails that people do not always think about and perceive things as they since it results in self-criticism and viewing themselves in an unpleasant light (Kirby, Goodpaster, and Levine 1999). While self-confidence is a critical element for success, however over-confidence in one’s own abilities acts as a barrier to success since it prevents us from analyzing our weaknesses and overseeing our flaws, leading to disastrous results in the long run.
Example: A strong sense of belief in one’s abilities and the perception that you are more intelligent and capable than others; tendency to shift the blame regarding any negative experiences or outcomes in your life on others and refusing to accept responsibility for own decisions or actions; a strong sense of belief in becoming a famous actor despite having absolutely no talent and being told so by those around you are some of the examples of self-serving bias.
Hegemonic assumptions:
According to Glabraith (2004) hegemonic assumptions refer to the assumptions individuals embrace willingly in a bid to protect their best interests (p. 342) and safeguard them from any impending hurt or any other similar negative feelings such as guilt, anxiety, or fear. Such hegemonic assumptions prevent us from critically analyzing things as they are and blinds us from pursuing our best interests.
Example: A strong belief in one’s friends or relatives and blindly following their advice without thinking or analyzing the intended purpose and expected outcome is one example of hegemonic assumptions.
Stereotyping:
It refers to the tendency among individuals to perceive reality with a highly biased attitudes based on stereotypes and unwarranted assumptions about others. It has a profound influence on our thoughts and actions and adversely affects our relationships in the society (De Klerk, 2011: 53). It restricts individual’s ability to think freely and prevents individuals from developing and exploring new ideas (Daniels, 2004). Stereotypes can be positive as well as negative; however both affect our rational judgment and prevents critical thinking.
Example: All women are bad drivers, African Americans are good athletes or good at sports; women are bad at sports; people who are good at studies are geeks and boring; all Asians are good at studies / well educated; All Muslims are terrorists; All Arabs are rich; All Irish people are drunk, All white Americans are dumb, lazy and obese (The T.v. Series The Simpsons highlights the typical stereotypical beliefs prevalent in the American society).
References:
Bassham, G., Irwin, W., Nardone, H., Wallace, J. M., (2005). Critical thinking: A students introduction. Mcgraw Hill Publication, p. 11-12
Cornell, P., Riordan, M., Townsend-Gervis, M., Mobley, R., (2011). Barriers to critical thinking: Workflow interruptions and task switching among nurses. Journal of Nursing Administration, Vol. 41 (10): p. 407-414
Daniels, R., (2004). Nursing fundamentals: Caring and clinical decision making. NY : Cengage Learning Publication, p. 182-183
De Klerk, M., (2011). Define the problem: Thinking about your thinking. Pittsburg, PA : Dorrance Publishing, p.54-55
Galbraith, M. W., (2004). Adult learning methods: A guid for effective instruction. Malabar, FL: Kreiger Publishing, p. 342
Kirby, G. R., Goodpaster, J. R., Levine, M., (1999). Critical thinking. Boston: Pearson Custom Publishing, p. 24 Read More
Share:
Tags
Cite this document
(“The Barriers of Critical Thinking Essay Example | Topics and Well Written Essays - 500 words”, n.d.)
The Barriers of Critical Thinking Essay Example | Topics and Well Written Essays - 500 words. Retrieved from https://studentshare.org/miscellaneous/1611213-the-barriers-of-critical-thinking

CHECK THESE SAMPLES OF The Barriers of Critical Thinking

... (2009) advises us to abstain from taking any instantaneous viewpoint or form any opinion on any matter because that will be mostly judgmental and only out of our deep rooted old habits that we are mired of. When we are successful in this first step, then and then only, we will be able to initiate our unbiased and conscious thinking process that will gradually loosen our ties with all barriers to thinking. Reference Ruggiero, V. R. (2009). The Art of Thinking: A Guide to Critical and Creative Thought. 9th ed. Pearson Education.... Barriers to Thinking There are some strong barriers to thinking such as stereotyping; conformity; resistance to change; face saving;...
1 Pages(250 words)Research Paper

...think critically in a bid to identify effective strategies for addressing the issue. Illustrate Critical thinking is the highway leading to a destination called the effective decision making (Nosich 50). Two questions that can be considered for class discussion include; highlighting the potential benefits of critical thinking and identifying the barriers of critical thinking. Current Event Reflection Title: Ebola 2014 — New Challenges, New Global Response and Responsibility Date: 20th August, 2014 The globe is facing a new Ebola threat, which has proven to be more severe than those...
1 Pages(250 words)Assignment

...Barriers to Critical Thinking Barriers to Critical Thinking Critical thinking refers to an objective, intelligent, skillful, activeand rational evaluation, analysis, and synthesis of information gotten from experience, communication, reasoning, observation and reflection. Indeed, critical thinking is a very important quality that every person should posses because it is paramount for informed and proper decision making. Nevertheless, critical thinking is often hindered by a wide range of barriers. This paper analyzes how...
2 Pages(500 words)Essay
sponsored ads
Save Your Time for More Important Things
Let us write or edit the essay on your topic "The Barriers of Critical Thinking" with a personal 20% discount.
GRAB THE BEST PAPER

Let us find you another Essay on topic The Barriers of Critical Thinking for FREE!