Comments (0)
Add to wishlistDelete from wishlist
Cite this document
Summary
This paper utters about the recent presidential debate, detailing the differences and commonalities of perspectives between the presidential candidates.
Romney utters that the…
Download full paperFile format: .doc, available for editing
HIDE THIS PAPERGRAB THE BEST PAPER94.5% of users find it useful 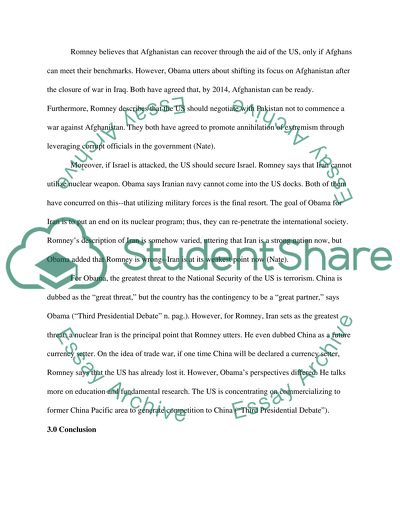 The Presidential Debate on Foreign Policy 0 Introduction The United s has gone another election period, whereby Obama has taken another term of office. This paper utters about the recent presidential debate, detailing the differences and commonalities of perspectives between the presidential candidates.
2.0 Distinguished Differences and Commonalities
Romney utters that the principal element of the US foreign policy is for the Muslims to reject extremism. The US can develop this by economic improvement, annihilate gender inequality and develop the rule of law. He added that Russia is a geopolitical enemy. Moreover, Syria must be penetrated through inculcating strong leadership because the country is a significant constituent of the Middle East. However, Obama ensures to secure Israel, secure religious minorities and feminines, and foster the economy. He also supplemented that Syria must be dissolved through ensuring that their allies are strong, but that does not mean military provisions. Moreover, both agreed in the case of the insisted Egyptian President Mubarak Go (Nate).
Romney’s perspectives on America’s role in the world are simply the leader of all nations to promote peace. That is possible by fostering the economy of the country, and supporting their allies. He depicted that there are uncertainties that may occur, and being prepared through firm troops is the best approach to combat against unexpected military forces that might attack the US. Obama notes that the US has been reconstructing the economy through employee retention, strengthening automaker industry, and decreasing the cost of oil imports (“Third Presidential Debate”).
Romney believes that Afghanistan can recover through the aid of the US, only if Afghans can meet their benchmarks. However, Obama utters about shifting its focus on Afghanistan after the closure of war in Iraq. Both have agreed that, by 2014, Afghanistan can be ready. Furthermore, Romney describes that the US should negotiate with Pakistan not to commence a war against Afghanistan. They both have agreed to promote annihilation of extremism through leveraging corrupt officials in the government (Nate).
Moreover, if Israel is attacked, the US should secure Israel. Romney says that Iran cannot utilize nuclear weapon. Obama says Iranian navy cannot come into the US docks. Both of them have concurred on this--that utilizing military forces is the final resort. The goal of Obama for Iran is to put an end on its nuclear program; thus, they can re-penetrate the international society. Romney’s description of Iran is somehow varied, uttering that Iran is a strong nation now, but Obama added that Romney is wrong--Iran is at its weakest point now (Nate).
For Obama, the greatest threat to the National Security of the US is terrorism. China is dubbed as the “great threat,” but the country has the contingency to be a “great partner,” says Obama (“Third Presidential Debate” n. pag.). However, for Romney, Iran sets as the greatest threat; a nuclear Iran is the principal point that Romney utters. He even dubbed China as a future currency setter. On the idea of trade war, if one time China will be declared a currency setter, Romney says that the US has already lost it. However, Obama’s perspectives differed. He talks more on education and fundamental research. The US is concentrating on commercializing to former China Pacific area to generate competition to China (“Third Presidential Debate”).
3.0 Conclusion
The 2012 Presidential Debate is a significant tool to determine the agenda of each presidential candidate. Through this, people can manifest how firm the candidates are regarding their platforms. In the case of Obama and Romney, they both have different perspectives about the governance of foreign matters. However, Romney has to do a lot of analysis on the present administrative attainments because his notions regarding the Obama administration are lacking grounds and therefore, invalid. Obama’s statements are strengthened by his principles, which can be viewed through his statements--consistent and directional.
Works Cited
Nate. “Video: Watch the Final Presidential Debate From Boca Raton.” 2012 Presidential
Election News. Election Central. 22 Oct. 2012. Web. 15 Nov. 2012.
“Third Presidential Debate: Full Transcript.” ABC News. ABC News Internet Ventures,
23 Oct. 2012, Web. 15 Nov. 2012. Read More
Share:
Tags
Cite this document
(“Debates Essay Example | Topics and Well Written Essays - 500 words”, n.d.)
Debates Essay Example | Topics and Well Written Essays - 500 words. Retrieved from https://studentshare.org/miscellaneous/1608575-debates

CHECK THESE SAMPLES OF Debates

...?The Lincoln/Douglas Debates The Lincoln-Douglas Debates (also referred to as LDD) of 1855 were a series of seven debates between then incumbent senator Stephen Douglas, the Democratic Party Candidate and Abraham Lincoln, the Republican candidate for Senate from Illinois. At the time, American senators were elected in accordance with the state legislatures. Thus Abraham Lincoln and his vis-a-vis were trying for their parties to win control of the legislature of Illinois. The debates forestalled the issues that Abraham Lincoln would face after is victory in the following presidential election. The main issue talked over in all seven debates was slavery...
5 Pages(1250 words)Essay

...? Archival Documents and Oral History Are Sources of Historical Data. What are some of the advantages and disadvantages linked tothis historiographical method? Among the leading sources of historical data are archival documents and oral history. Archives have been in existence since ancient times. In O’Toole and Cox’s viewpoint, the term “archives” was initially used to mean a collection of all written materials (O’Toole & Cox 1990, p.28). However, in the contemporary world, this term has had a three-fold meaning: firstly, to designate documents that have been accumulated or created by individuals or organizations in the contemporary daily execution of their mandates. The term may also be used to denote those programs or agencies... Archival...
8 Pages(2000 words)Essay

...Analysis of Debates Introduction Human inhibitions are very dangerous; they relentlessly come in the way of progressionof the society. Herd-like mentality due to the imposed notions of the society, age-old conventions and faithful adherence to those set principles have always blocked the way for something unconventional. Hence, anyone reacting or taking a plunge which is different or does not comply with the set conventions of the society is seen as someone violating a ‘taboo’. It can be issues like having extra-marital relations, pre-marital child, live-in relations, euthanasia, gay-marriages or even divorce. Society never ceases to look down upon any person taking these plunges or walking those extra miles. These...
4 Pages(1000 words)Research Paper

...?Debates on Media Effects Introduction The media have become one of the most powerful resources man has ever developed. It represents a tool of communication and information which humans have established to enhance and widen human relations and perspectives. For the most part, it has helped serve primary goals of communication and information dissemination. This is not to say however that it has not caused unfavourable effects for society. This paper will discuss the different points raised on media effects. It will discuss how the media affects us and critically evaluate debates on media effects, as well as traditional and new approaches to media effect theories. With reference to a specific case study,...
7 Pages(1750 words)Essay

...Analysis of the 2008 Presidential Debates Political debates are an excellent way to practice the use of dis analysis. They offer a great many examples of the different ways in which spoken word can be manipulated toward a meaning different than the words alone would normally imply (Chilton). It also gives the observer a glimpse into the inner workings and deeper motives of the speaker as the analysis assists in uncovering hidden meanings revealed through context, emotion, gestures, and intonation among other things (Wodak). Discourse analysis can also help the observer to better understand the power struggle that can take place between two competitors, especially those warring in an arena of words, such...
18 Pages(4500 words)Book Report/Review

The Power of Debates

...The Power of Debates As old as the political system itself, debates have been a way in which candi s can best let the electorate know who they are, why they are running and what they intend to do if given the chance to lead. Abraham Lincoln and Stephen Douglas held a total of 7 debates during the Illinois Senatorial campaign of 1858. What lead to such a stream of debates "Abraham Lincoln wrote a challenge to debate and Stephen A. Douglas accepted. The two men would meet on platforms and clash on issues in cities in seven different parts of the state, all Illinois watching, the whole country listening. By the shorthand writing newly invented, reporters would give the country "full phonographic verbatim reports," newspapers told... their...
5 Pages(1250 words)Essay

...Terrorism in the 21st century is very different than terrorism in the time of John Locke or Edmund Burke. In the past, acts of terrorism—which can bedefined as attacks on civilian targets rather than military targets—were often committed as part of a campaign of independence or to achieve a nationalist goal. They were often geographically limited and did not cause large-scale civilian casualties. Today, terrorism is a global threat motivated by a very different ideology and is much more deadly. Burke would be appalled by this development and would probably support American and government action against terrorists; Locke would probably be appalled by Guantanamo Bay and some of the extremes committed by the Bush Administration after...
2 Pages(500 words)Essay

...s Teacher’s 12th October’ Abortion Debates Abortion is one of the most discordant issues of every society. Be it the east or the west, this topic has always trounced all other issues of discussions and has been the cause of innumerable debates. Abortion, according to one type of people is considered to be the most depraved and unethical practices done by the women who opt for it and the people who help them do so. This is because human life should be valued and respected and nature does not allow the act to harm or terminate the life of anyone. Abortion damages a new soul that is about to be a part of the word and destruction of a new soul means murder. Moreover, there are lots of other health...
1 Pages(250 words)Thesis

...CRITICAL DEBATES IN PLANNING By Location PART B: PREPARATORY BY Texts read: Allmendinger, 2002 Clifford and Morphet, 2014 Tomaney and Colomb, 2013 1 What are the strong arguments made by the authors in relation to the session theme? Allmendinger 2002: Devolution holds the potential to highly impact country and town planning. The last years have witnessed a concerted progression of “planning reform”, which is implemented by devolved and the central UK government with the aim of modernizing the planning system according to some objectives. Devolution refers to stationary releasing of leadership powers from central regime of a state to sub-national level of government (Allmendinger 2002, p. 359). Regardless of the policy divergence... of these...
4 Pages(1000 words)Article

...Critical Debate Assignment PART B: PREPARATORY BY Texts read: Brock Barclays 2002 Ellis 2004 What are the keyarguments made by the authors in relation to the session theme? Ellis 2004 Although third-party rights of appeal would present additional opportunities for framing citizen engagement with the planning system, there remains a fundamental imbalance between the rights of challenge afforded to first parties (that is, developers) and those given to objectors (that is, third parties). It is wrong to assume that any enhancement of a procedural rights regime will be used predominantly for instrumental participation, and thus contrary to the `public interest’ objectives of planning. The absence of third-party rights of...
4 Pages(1000 words)Essay
sponsored ads
Save Your Time for More Important Things
Let us write or edit the essay on your topic "Debates" with a personal 20% discount.
GRAB THE BEST PAPER

Let us find you another Essay on topic Debates for FREE!