How were the pyramids at Giza Constructed - Essay Example

Comments (0)
Add to wishlistDelete from wishlist
Cite this document
Summary
They tower above the deserts of Egypt as a testament to the spiritual vision and civil engineering talents of the Egyptians in the age of the Pharaohs. Archaeologists have worked out the purpose…
Download full paperFile format: .doc, available for editing
HIDE THIS PAPERGRAB THE BEST PAPER94.6% of users find it useful 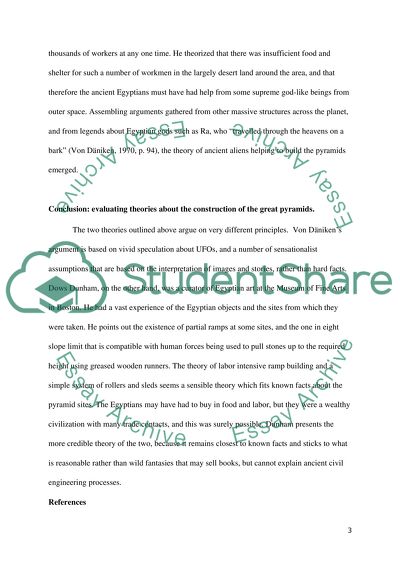 Extract of sample "How were the pyramids at Giza Constructed"

How the pyramids at Giza were constructed. Introduction The ancient pyramids at Giza are admired by all as one of the wonders of the world. They tower above the deserts of Egypt as a testament to the spiritual vision and civil engineering talents of the Egyptians in the age of the Pharaohs. Archaeologists have worked out the purpose of the structures, linking them to beliefs about the afterlife, and with the burial and commemoration practices of the people at that time. There are still many unresolved questions, however, relating to the methods that the builders used to create these huge and imposing monuments. The great pyramids consist of huge stone blocks, carefully measured out and carved, and then slotted in to fit a perfect geometric shape on a truly colossal scale. Scientists today are still trying to figure out how a nation without modern lifting equipment and mechanized transportation could possibly have had the technical skill and physical power to construct these tall edifices in the sandy ground. The fact that the Egyptians possessed such a capability is undeniable, since the pyramids are still standing there as evidence. How these people managed this great feat is, however, a deep mystery.
Theories to explain the construction of the pyramids.
It has long been recognized that the ancient Egyptians used ramps and wooden sleds to transport huge blocks of stone from the quarries to the building site, and that there is no evidence that they knew about the wheel, the pulley or the derrick (Dunham, 1956, p. 161). It seems that they just built ramps and used many thousands of workers, and this simple explanation is widely accepted. Another, much more radical theory has been advanced by Danish scholar Erich von Däniken who argues that it would have taken human beings some 600 years to build the great pyramid of Cheops, the largest of the pyramids at Giza, shifting more two and a half million blocks of stone (Von Däniken, 1970, p.96) and using tens of thousands of workers at any one time. He theorized that there was insufficient food and shelter for such a number of workmen in the largely desert land around the area, and that therefore the ancient Egyptians must have had help from some supreme god-like beings from outer space. Assembling arguments gathered from other massive structures across the planet, and from legends about Egyptian gods such as Ra, who “travelled through the heavens on a bark” (Von Däniken, 1970, p. 94), the theory of ancient aliens helping to build the pyramids emerged.
Conclusion: evaluating theories about the construction of the great pyramids.
The two theories outlined above argue on very different principles. Von Däniken’s argument is based on vivid speculation about UFOs, and a number of sensationalist assumptions that are based on the interpretation of images and stories, rather than hard facts. Dows Dunham, on the other hand, was a curator of Egyptian art at the Museum of Fine Arts in Boston. He had a vast experience of the Egyptian objects and the sites from which they were taken. He points out the existence of partial ramps at some sites, and the one in eight slope limit that is compatible with human forces being used to pull stones up to the required height using greased wooden runners. The theory of labor intensive ramp building and a simple system of rollers and sleds seems a sensible theory which fits known facts about the pyramid sites. The Egyptians may have had to buy in food and labor, but they were a wealthy civilization with many trade contacts, and this was surely possible. Dunham presents the more credible theory of the two, because it remains closest to known facts and sticks to what is reasonable rather than wild fantasies that may sell books, but cannot explain ancient civil engineering processes.
References
Dunham, D. (1956) Building an Egyptian Pyramid. Archaeology 9 (3)(1956), pp. 159-165.
Von Däniken, E. (1970) Chariots of the Gods. Berkeley: G.P. Putnam. Read More
Share:
Tags
Cite this document
(“How were the pyramids at Giza Constructed Essay Example | Topics and Well Written Essays - 500 words”, n.d.)
How were the pyramids at Giza Constructed Essay Example | Topics and Well Written Essays - 500 words. Retrieved from https://studentshare.org/miscellaneous/1605744-how-were-the-pyramids-at-giza-constructed

“How Were the Pyramids at Giza Constructed Essay Example | Topics and Well Written Essays - 500 Words”, n.d. https://studentshare.org/miscellaneous/1605744-how-were-the-pyramids-at-giza-constructed.
Comments (0)
Click to create a comment or rate a document

CHECK THESE SAMPLES OF How were the pyramids at Giza Constructed

The essentials of international marketing in the context of a UK-based firm, Directa Ltd

...? Theories regarding the Construction of the Pyramids at Giza Department, Correspondence address. Construction of the Pyramids The pyramid at Giza is a part of the seven ancient wonders of the world and is the only existing construction among the seven. The sheer size and magnitude of the pyramid and the relative technological inferiority of the Egyptians (when compared to modern times) makes one wonder how these tombs were constructed. There are various theories that are forwarded to explain their construction and this...
2 Pages(500 words)Essay

...?Topic:  Research theories on how the Pyramids at Giza were built ; compare and choose to support Introduction - The Mystery of the Pyramids of Giza The pyramids at Giza in Egypt are one of the most renowned wonders of the world which has mesmerized people all around the globe, since its discovery. The Egyptian pyramids are basically built as the resting place for the kings and queens knows as “Pharaohs” of Egypt. These pyramids in Egypt are the monuments built by pharaohs in order to secure their life after death. The most perplexing fact of these...
3 Pages(750 words)Research Paper

...the early periods. They had different forms and level of technology in different fields. These fields included mathematics, medicine as well as other fields. One of the most remarkable technologies in ancient Egypt is the construction of the pyramids and other buildings. The pyramids were made for the mummies and some of them such as the pyramid of Giza exist up to date. Further technology also existed in the field of ship making as well as navigation. The knowledge of sail that governed the ship building was based on the science of aerodynamics. This knowledge is evidenced by drawings that were found in the remains of...
6 Pages(1500 words)Research Paper

The Mystery Of Pyramids

...as the people of his family and court. The tombs of these people surrounded the Kings' pyramids in the same manner throughout the Egyptian pyramid era. The passages and ways under the ground were constructed in the standardized vein during the periods of all the Egyptian Kings. However the size varied due to the ability and expertise of Egyptian people in building such huge monuments that marked the history of Egyptian civilization capturing the interest and awe for the world, generation after generation (The Built of Egyptian Pyramids). There exist about hundred pyramids in Cairo the Egyptian capital, however the ones at...
10 Pages(2500 words)Essay

...The Great Pyramids of Giza The pyramids of Egypt are one of the amazing wonders of the world that have attracted millions of tourists to this destination as spectators come to marvel at the architectural know-how that was wielded by the ancient Egyptians at a time when technology was not in existence (Hawass). The pyramids were built in a conical like shape with the pointed tip at the top, and it has been a nagging question to many scientists of how they managed to do this without a sort of strong adhesive to keep the stones together (Shafer & Dieter 26). The durability of the structures have also been a great wonder as...
5 Pages(1250 words)Essay

...There have been several mysteries associated with the Great Pyramid at Giza, which is the only remaining wonder of the ancient world. The construction of the pyramid which is made of huge blocks of stone weighing in tons has been the subject of various debates, archeological expeditions and numerous research conducted by many scientists across the world. Around 2 million blocks of stones with an average weight of 2.5 tons is estimated to have been used for its construction and how these blocks were moved up to the top of the pyramid has been the subject of major archeological research studies. Many...
2 Pages(500 words)Essay

The Pyramids At Giza

...﻿The Pyramids At Giza The pyramids at Giza, which are often referred to as one of the Seven Wonders of the Ancient World, are still one of the most marvelous and mysterious buildings on the planet. There are many theories concerning the way they were built and the reasons for constructing such enormous edifices. Thus, some researchers suggest that the pyramids were constructed by another more advanced civilization while the vast majority of scientists believe that these buildings are human-made. Both sides provide arguments to support their ideas. It is noteworthy that both theories are...
2 Pages(500 words)Essay
sponsored ads
Save Your Time for More Important Things
Let us write or edit the essay on your topic "How were the pyramids at Giza Constructed" with a personal 20% discount.
GRAB THE BEST PAPER

Let us find you another Essay on topic How were the pyramids at Giza Constructed for FREE!