Comments (0)
Add to wishlistDelete from wishlist
Cite this document
Summary
2013 Ford Shelby GT500’ by Scott Evans is about the comparative performance of the two cars on three different tracks. The two cars are known as American musclecars and have always been highly competitive. They were driven on…
Download full paperFile format: .doc, available for editing
HIDE THIS PAPERGRAB THE BEST PAPER96.6% of users find it useful 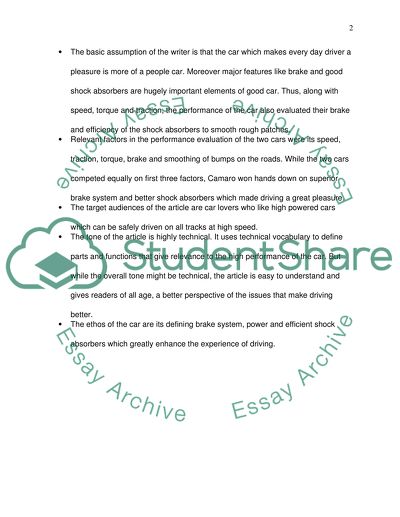 Summary The article, Chevrolet Camaro ZL1 vs. Ford Shelby GT500’ by Scott Evans is about the comparative performance of the two cars on three different tracks. The two cars are known as American musclecars and have always been highly competitive. They were driven on street, the dragstrip and the racetrack. On the street, Camaro performed better and took bumps smoothly. Ford had too much vertical motion which made driving more difficult. On the dragstrip, timing and traction are critical issues. Ford was a winner here due to higher power. On the third and final racetrack, it was a close fight. Ford was faster on the straight and up the hills but Camaro was faster at corners. Although Ford had won by few seconds, Camaro proved to be a better car because of more efficient brake system. (words: 152)
The main thesis of the article is that the car which boosts the confidence of the driver is definitely better. The article shows that Camaro was a better car than Ford Mustang mainly for two reasons:
Camaro had magnetorheological shock absorbers that kept the chassis under control and smoothed the rough patches on the street. Ford could not take bumps on the road and experienced vertical motions which adversely impacted driving.
Camaro’s brake system was better and stopped instantly. It gave confidence to the drivers of Camaro. On the other hand, after first lap, brake got heated up and do not stop fast enough, which could prove fatal on racetrack. The cooling system in Ford was flawed. The brakes being very crucial aspect of driving, driving Ford made drivers nervous.
The basic assumption of the writer is that the car which makes every day driver a pleasure is more of a people car. Moreover major features like brake and good shock absorbers are hugely important elements of good car. Thus, along with speed, torque and traction, the performance of the car also evaluated their brake and efficiency of the shock absorbers to smooth rough patches.
Relevant factors in the performance evaluation of the two cars were its speed, traction, torque, brake and smoothing of bumps on the roads. While the two cars competed equally on first three factors, Camaro won hands down on superior brake system and better shock absorbers which made driving a great pleasure.
The target audiences of the article are car lovers who like high powered cars which can be safely driven on all tracks at high speed.
The tone of the article is highly technical. It uses technical vocabulary to define parts and functions that give relevance to the high performance of the car. But while the overall tone might be technical, the article is easy to understand and gives readers of all age, a better perspective of the issues that make driving better.
The ethos of the car are its defining brake system, power and efficient shock absorbers which greatly enhance the experience of driving.
Reference
Evans, Scott. 2012 Chevrolet Camaro ZL1 vs. 2013 Ford Shelby GT500. Motortrend, 27 June 2012. http://www.motortrend.com/roadtests/coupes/1206_2012_chevrolet_camaro_zl1_vs_2013_shelby_gt500/viewall.html 16 September 2012. Read More
Share:
Tags
Cite this document
(“Chevy vs gt500 article Essay Example | Topics and Well Written Essays - 500 words”, n.d.)
Retrieved from https://studentshare.org/miscellaneous/1603094-chevy-vs-gt500-article

CHECK THESE SAMPLES OF Chevy vs gt500 article

Fictional, reflective review on academic experiences and other skills acquired through internships

...Apple vs. Samsung - what does it mean for design? This article is about the landmark ruling in the United s that found Samsung guilty over the infringement of Apple’s intellectual property. Other than the huge size of the award, the author analyses some of the wider ramifications of this ruling with regards to the ownership of interaction design in the fastest growing segment of consumer electronics. In as much as Apple may have a claim, the article ponders the effect of this ruling on the growth and future of innovation in consumer electronics. We are informed of how the UK courts threw out a similar case because it does not have laws on software patents (Banks, 2012). Apple and...
1 Pages(250 words)Essay

...Object Recognition Object Recognition In seeking to know why mislocation errors are more infrequent than intrusion errors with strings of relatively familiar signs and symbols, Garvin Chastain (1995) undertook two experiments. The bone of contention was that while error in reporting a postcued target in a string of various letters usually involved a letter appearing elsewhere in the string than the one not appearing in the string, mislocation errors were still not more common than intrusion ones (Chastain, 1995). In the first experiment, Chastain selected one exposure duration for every subject that yielded an overall proportion correct of approximately .55 with regard to letters, and roughly .55 for forms. In order to come... Recognition...
1 Pages(250 words)Essay

... Prius vs. Volt Whether a person is buying a car to save gas or save the environment two of the best moderately priced choices is the Toyota Prius and Chevy Volt. Both are somewhat stylish though neither would be considered “cool” looking, neither a “chick magnet” nor something a guy would fantasize about. However, each is acceptable looks-wise and is a smart, economical choice. A Corvette is a better attention getter but that boost of pride (ego) gained by driving one fades pretty quickly after making the first car payment, insurance installment and paying for a full tank of premium gas once a week or more. Those who drive a race-type car must be jealous at least part of the time of someone who drives a gas saving car with decent... . Since...
2 Pages(500 words)Essay

...Lecturer “Chevy Silverado” The Chevy advert wants to make the viewers connect with the roots of the car. The commercial is basically aimed at showing the Chevy as ‘an American car’. The Silverado is the product of a company that has built cars for a long time. Their cars have been associated with some of the historical events. As such the Silverado is a product of experience and is meant to serve the American people. It has used clips from the Martin Luther King Jnr ‘I have a dream, speech, The landing of Neil Armstrong on the moon and the Hurricane Katrina. Showing martin Luther king Jnr in the commercial as the theme song progresses with the words “I believe there is a dream for...
2 Pages(500 words)Essay

...Nursing Article Nursing Article Risks for Hypertension among Undiagnosed African American Mothers and Daughters A nurse did not write the article. The author is Jacquelyn Y. Taylor, an assistant lecturer in the school of nursing at Yale University. Such researches require to be undertaken by practicing nurses. Despite the author having academic qualifications of a nurse, her occupation as a professor does not allow her to participate as a researcher, but as a consultant in the undertaking the research. Individuals with nursing professional qualification, who are also practicing nurses, should undertake medical research of the magnitude of the described article. The study significance was identified through the identification... hypothesis of...
6 Pages(1500 words)Admission/Application Essay

TSCA VS REACH VS CEPA

Let us find you another Essay on topic Chevy vs gt500 article for FREE!