Comments (0)
Add to wishlistDelete from wishlist
Cite this document
Summary
However, this is not so in the Professional-Tradesman segment (P-T segment). The poor performance in this sector is because the brand name has been poorly positioned when it comes…
Download full paperFile format: .doc, available for editing
HIDE THIS PAPERGRAB THE BEST PAPER96.3% of users find it useful 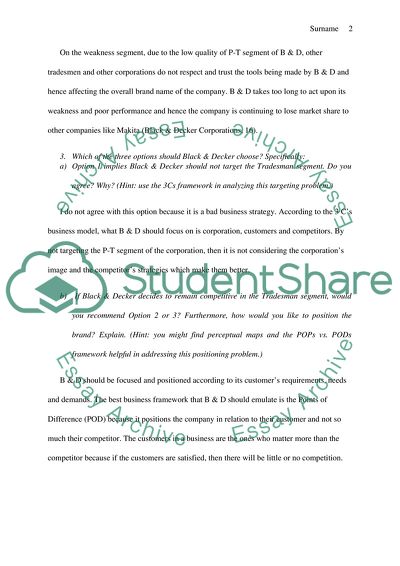 Black & Decker Corp. (A Power Tools Division Why is Black & Decker, the overall market leader, doing poorly in the Professional-Tradesman segment?
Black & Decker is a big brand name in the corporations’ world and hence named the market leader. However, this is not so in the Professional-Tradesman segment (P-T segment). The poor performance in this sector is because the brand name has been poorly positioned when it comes to this sector and hence fewer clients and the rest have negative perceptions about the quality of this segment. When customers have less belief in the quality of a product, no matter how prestigious the corporation is, the affected sector has to come up with better strategies because it contributes to poor performance.
2. As Black & Decker weighs its strategic options, what are its strengths and weaknesses relative to competitors (especially Makita)?
One of the overall strengths of Black & Decker (B & D) is that it is has a higher service rating than Makita and hence this puts it at an advantage. The power tools of B & D are of better quality and hence highly valued in that market which is a big strength on the part of the corporation. Even though B & D has poor performance in the P-T segment compared to Makita, the market share of the P-T is small and hence the loss is not so much.
On the weakness segment, due to the low quality of P-T segment of B & D, other tradesmen and other corporations do not respect and trust the tools being made by B & D and hence affecting the overall brand name of the company. B & D takes too long to act upon its weakness and poor performance and hence the company is continuing to lose market share to other companies like Makita (Black & Decker Corporations, 16).
3. Which of the three options should Black & Decker choose? Specifically:
a) Option 1 implies Black & Decker should not target the Tradesman segment. Do you agree? Why? (Hint: use the 3Cs framework in analyzing this targeting problem.)
I do not agree with this option because it is a bad business strategy. According to the 3 C’s business model, what B & D should focus on is corporation, customers and competitors. By not targeting the P-T segment of the corporation, then it is not considering the corporation’s image and the competitor’s strategies which make them better.
b) If Black & Decker decides to remain competitive in the Tradesman segment, would you recommend Option 2 or 3? Furthermore, how would you like to position the brand? Explain. (Hint: you might find perceptual maps and the POPs vs. PODs framework helpful in addressing this positioning problem.)
B & D should be focused and positioned according to its customer’s requirements, needs and demands. The best business framework that B & D should emulate is the Points of Difference (POD) because it positions the company in relation to their customer and not so much their competitor. The customers in a business are the ones who matter more than the competitor because if the customers are satisfied, then there will be little or no competition.
c) What actions should Black & Decker take to achieve the positioning you recommend above?
The first step that B & D should take is to conduct a feasibility study about the poor performance of P-T segment. In order to fulfill the customer’s needs, B & D needs to communicate with their customers more about what they really need when it comes to P-T segment products POPs vs. PODs framework which has poor performance despite the market being really opportunistic.
After the feasibility study and the communication, B & D should then act on the suggestions and then find sustainable ways to ensure that the poor performance will not be repeated again in future and that this segment of the corporation will catch up with the other segments. With these strategies, then performance will improve and the corporation will resume its market superiority again (Kotler, 54).
Works Cited
Black & Decker Corporations. Black & Decker The Complete Photo Guide to Sheds, Barns & Outbuildings: Includes Garages, Gazebos, Shelters and More. New York: Creative Publishing Int’l, 2010.
Kotler, Philip. A Framework for Marketing Management. Pennsylvania: Prentice Hall, 2008. Read More
Share:
Tags
Cite this document
(“Black & Decker Corp. (A): Power Tools Division Discussion Questions Essay”, n.d.)
Retrieved from https://studentshare.org/miscellaneous/1598822-black-decker-corp-a-power-tools-division-discussion-questions

...and competitive. Question 3: By the 2000’s, what strategy was Black & Decker pursuing in the global marketplace? How would you characterize its structure? Do you think the structure fit the strategy and environment? By the 2000’s power tools’ company announced another restructuring initiative (Case study, 2). Seeking to lower its costs, Black & Decker reduced its workforce significantly and shut down the factories in Britain and the United States (Case study, 2). Later the company reorganized its business into two separate global divisions and empowered its design and R&D centers in the United States...
5 Pages(1250 words)Case Study

...be accomplished only through militant actions. It is not possible to comprehend the reason for the formation of the BPP or attempt to explain its violent tendencies without first examining the Civil Rights movement of the 1950’s and 1960’s and the specific events leading up to its establishment. This discussion will give a brief synopsis of those historic events and the people that laid the foundation for the forming of the BPP; provide an overview of the party and then delve more deeply into the inner-workings of the organization. Malcolm X (Little) became a powerful speaker in the movement and became more important to the cause by his death than he was in life. As Martin Luther King had secured the...
5 Pages(1250 words)Essay

...This paper seeks to look into the prospects of Black and Decker with respects to its expansion plans. This follows the acquisition of Emhart Corporation and the need for the organization to establish a global lock business. It is realized that several opportunities are certainly available for exploration and progress. Nevertheless, the organization has to wade through myriad challenges before it can realize its objectives. All these developments call for a restructuring of the organization in order to provide the perfect ground for effecting these changes. More importantly, it is realized that the organization has the ability to establish a strong base in the world in this particular industry....
6 Pages(1500 words)Case Study

...Module Black Power June 16th 1966, Carmichael put his mark on American history with a phrase, “The only way we’ gonna stop them white men from whuppin’ us is to take over. What we’ gonna start sayin’ now is Black Power!” With that, the Black Power phrase was born, which would later grow to become a movement for black people of the United States. The phrase was literally a battle line already drawn. On one side was the whites while on the other side were the blacks. It was not much of a physical war where arms would be used; this was a war of ideas and dominancein, among other fields, the political and...
5 Pages(1250 words)Essay

...?SWOT Analysis Strengths Black & Decker is a global brand which is known as the best for its power tools and accessories. Black & Decker has a strongposition in the home appliances and domestic tools division. The brand is equally popular in Europe and U.S and is ranked among the top ten brands worldwide. Black & Decker has several sub brands which it can be used as strategic option for surviving in the competitive global environment. The brand has been divided into three segments namely domestic, tradesmen and professional industrial segments. Each segment is catered...
5 Pages(1250 words)Research Paper

...of Revolution and Violence: Black Power Mix Tape When asked about the use of violence in society for revolutionary purposes, Angela Davis in the documentary Black Power Mix Tape argues that violence in the United States of America was inevitable. As one of the reasons, she cites the fact that the African American community was a constant and everyday target of violence on the part of racist elements. Drawing on experiences of her childhood when racist attacks led to the killings of many of her friends, Davis argues that violence was the only means for many of the lower class African Americans to protect themselves and in certain cases, register their protest (Olsson)....
1 Pages(250 words)Movie Review

...that it would question their intellectual power. These programs are largely controlled by White institutions that are loath to give scholarships to the under privileged Blacks. A majority of Blacks feel that the Black Studies programs are not given the same amount of recognition that its counterparts acquires and therefore they either drop out of this program midway or do not enroll at all. So, by reading about the struggles that helped in the formation of the Black Studies program the African American would feel a greater degree of respect towards the objectives of the programs and enroll in them in a greater number. Hence, the book...
11 Pages(2750 words)Book Report/Review
sponsored ads
Save Your Time for More Important Things
Let us write or edit the essay on your topic "Black & Decker Corp. (A): Power Tools Division Discussion Questions" with a personal 20% discount.
GRAB THE BEST PAPER

Let us find you another Essay on topic Black & Decker Corp. (A): Power Tools Division Discussion Questions for FREE!