Comments (0)
Add to wishlistDelete from wishlist
Cite this document
Summary
and available at the Apple app store, the application targets children between the ages of 1 to 6 years and has the option of allowing adults to select the range of content to be learnt. It has the advantage of aiding learning among children without…
Download full paperFile format: .doc, available for editing
HIDE THIS PAPERGRAB THE BEST PAPER93% of users find it useful 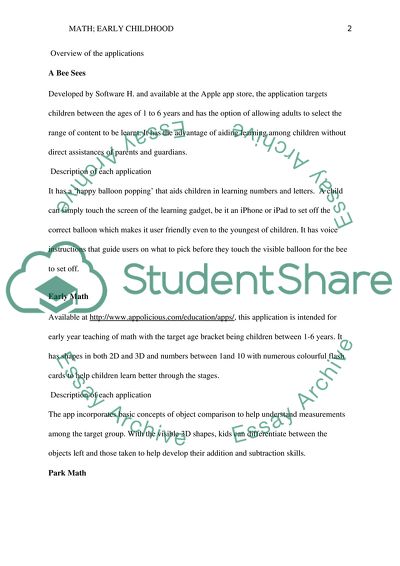 Math; Early Childhood Naida Kardas Arizona Overview of the applications A Bee Sees Developed by Software H. and available at the Apple app store, the application targets children between the ages of 1 to 6 years and has the option of allowing adults to select the range of content to be learnt. It has the advantage of aiding learning among children without direct assistances of parents and guardians.
Description of each application
It has a ‘happy balloon popping’ that aids children in learning numbers and letters. A child can simply touch the screen of the learning gadget, be it an iPhone or iPad to set off the correct balloon which makes it user friendly even to the youngest of children. It has voice instructions that guide users on what to pick before they touch the visible balloon for the bee to set off.
Early Math
Available at http://www.appolicious.com/education/apps/, this application is intended for early year teaching of math with the target age bracket being children between 1-6 years. It has shapes in both 2D and 3D and numbers between 1and 10 with numerous colourful flash cards to help children learn better through the stages.
Description of each application
The app incorporates basic concepts of object comparison to help understand measurements among the target group. With the visible 3D shapes, kids can differentiate between the objects left and those taken to help develop their addition and subtraction skills.
Park Math
Also available at http://www.appolicious.com/education/apps, it has won several awards among the 2011 Silver Award by the Parents’ Choice Foundation. It invites kids to learn how to count, add subtract and sort in a park setting with its target users being between the ages of 1and 6 years.
Description of each application
It has seven fun learning activities that start with swing numbers that help in counting rabbit swings up to 50, slide additions where a duck climbs on top of each slide as the user counts thereby learning how to make additions, Apple tree for subtraction where users learn how to subtract as Apples fall from a tree and picnic for counting where kids feed a hippo with the right food items just to highlight a fraction of the activities.
Comparison and contrast of the applications
The application has sufficient details with the all the required elements of a good app from the results of the evaluation. It has both operational variety and interest that stir user curiosity. The evaluation tool therefore awarded it optimum points with regards to accessibility, content and individualization.
The three applications have a similar target group of between years 1 and 6 with the distinction n the mode of learning where the first app employs a bee and balloon, second uses shapes in 2D and 3D while the last brings an outdoor setting in the form of a park. The apps have different learning levels that aim at harnessing math skills in kids differently but with the common objective of imparting basic mathematical concepts in learners within the target age bracket.
Description of strengths/weaknesses of each application
A Bee Sees
Has the strength of being pre set by adults and do not therefore require close supervision during the learning process. The weaknesses witnessed are that; it’s boring with one function of a bee and balloons, does not give proper positive feedback to encourage learners in the event of a successful action and lacks thrill due to its monotonous nature.
Early Math
It has the strength of learning processes divided into over 10 experiences which provides the kind of variety lacking in the above app. It however has the weakness of not being interactive as the child only observes shapes. The other weakness is the lack of strong positive feedbacks to encourage learners through the process.
Park Math
The outstanding strengths of this app are:
It has an outdoor feel with all its activities undertaken in a park setting
Very interactive in the various learning activities
Learning is segmented into 7 very distinct and interesting activities.
The weakness witnessed is that it requires the absolute involvement of an adult through the learning process
Recommendation
The above apps are very distinct and can all be used in different occasions to avoid monotony and boredom related to one learning tool. Being adventures and with their minimal concentration, children do appreciate variety that makes their learning processes interesting and therefore using the three apps is important in achieving the intended results. Park Math can be used as a elementary learning starter, possibly at the very start of learning to stir interests of the children in math while A bee Sees and Early Math be used after children’s attention has been fully drawn to the study of the subject, in build up lessons that add on the foundations laid by Park Math (Blake, 2011).
References
Blake, S. (2011). Child development and the use of technology perspectives, applications and experiences. Hershey, Pa.: IGI Global (701 E. Chocolate Avenue, Hershey, Pennsylvania, 17033, USA).
Appolicious ™ iPhone and iPad App Directory. (n.d.). iPhone apps and iPad apps | Appolicious ™ App Directory. Retrieved April 5, 2012, from http://www.appolicious.com/education/apps/377413-park-math-by-duck-duck-moose- duck-duck-moose-partnership/developer_notes
Software, H., & Inc.. (n.d.). App Store - A Bee Sees - Learning Letters, Numbers, and Colors. Apple - iTunes - Everything you need to be entertained.. Retrieved April 5, 2012, from http://itunes.apple.com/app/bee-sees-learning-letters/id345831563?ign- mpt=uo%3D6&mt=8 Read More
Share:
Tags
Cite this document
(“Math Early Childhood Essay Example | Topics and Well Written Essays - 500 words”, n.d.)
Math Early Childhood Essay Example | Topics and Well Written Essays - 500 words. Retrieved from https://studentshare.org/miscellaneous/1592817-math-early-childhood

...concluded that he was not consistent, tried to be social but easily got frustrated when he would discover that others found it hard to understand what he was saying, yet he liked to explore things and occupied himself with activities that interested him. Jean Paige’s early childhood is the second of the four stages of cognitive development. The children between two and six use preoperational intelligence, language and imagination, but fail to use logical operations. Empathy is a child’s response to others’ emotions. Joey showed empathy in that when a child snatched food from another and the latter started crying, Joey went into the kitchen and brought him more food. Egocentrism is the concept when a...
2 Pages(500 words)Essay

...? Early Childhood The essay aims to discuss the Montessori approach to language development. The essay will also discuss the sensitive periods of a child. The Three Period Lesson, a method used in the language development of a child, will also be explained. Early Childhood “Language, we may say, grow with human thought.” (Montessori, 1995). Maria Montessori believes people naturally want to communicate because human beings are social creatures. This is the reason why children have a natural urge for language. According to Montessori, “the development of articulate speech occurs between the ages two and five --- the age of perception in which the attention of the child is spontaneously directed to external objects and the memory... Early...
3 Pages(750 words)Essay

...? Early Childhood The essay aims to discuss the importance of imagination and creativity in young children. It will also describe what the Montessori prepared environment is and how it aids in the development of the child. The essay will give examples of the culture activities in the prepared environment. The eight natural laws of development espoused by Dr. Montessori will be elaborated to show how it impacts on a child’s development. Early Childhood “The secret of good teaching is to regard the child's intelligence as a fertile field in which seeds may be sown, to grow under the heat of flaming imagination. Our aim therefore is not merely to make the child understand, and still less to force him to memorize, but so to touch his... Early...
4 Pages(1000 words)Essay

...? Children’s thinking development Introduction The development of infants is accumulated of several steps. The physical and psychological growth of children comprises of numerous radical components. After opening eyes into the world; observing things around is the foremost phase in their cognitive development process. The physical growth goes along side but mental development has considerable significance and virtue. The environment prevalent around becomes an essential part of his childhood memories. Psychologists and researchers believe that learning stage of humans start from day one. There is not even a single day of life in which children don’t learn. The functionality of brain is superior in early...
8 Pages(2000 words)Research Paper

...Running Head: WHAT IS A GOOD EARLY CHILDHOOD TEACHER What is a Good Early Childhood Teacher in APA Style by University Having a good early childhood teacher is one of the most important things which should be taken into account by schools and parents alike. Being there during the early stages of the child's life, this person will hugely affect the moral, emotional, and intellectual development of children who are under her tutelage. At this very essential stage in a child's life, he or she should be furnished with a good teacher which will enable him or her to reach her full potential. Thus, the ultimate aim of a good...
4 Pages(1000 words)Essay

Groups have group think especially when formed by students sharing the same interests. Groups used different materials to create variety of ideas since students have cognisance of different objects. 3. He uses variety of graphical representation techniques for instance: maps, number line and scales. This enhances flexibility in learning since the student gets different ideas resulting in a general understanding. He set the students free to move around and be comfortable when working on the estimates. 4. By the use of number line to allocate the point at which the animal counts they have estimated rests. They used rulers and maps to estimate the size of geographical regions under survey. Measurement at the number could have been...
4 Pages(1000 words)Assignment
sponsored ads
Save Your Time for More Important Things
Let us write or edit the essay on your topic "Math Early Childhood" with a personal 20% discount.
GRAB THE BEST PAPER

Let us find you another Essay on topic Math Early Childhood for FREE!