Comments (0)
Add to wishlistDelete from wishlist
Cite this document
Summary
Affirmative action policies are the positive dealings that are undertaken with a lot of certainty and conscientiousness by organizations in an attempt to overcome past challenges, practices and barriers to one and the same employment opportunities (Schmidt, 2008). This aims at…
Download full paperFile format: .doc, available for editing
HIDE THIS PAPERGRAB THE BEST PAPER98.5% of users find it useful 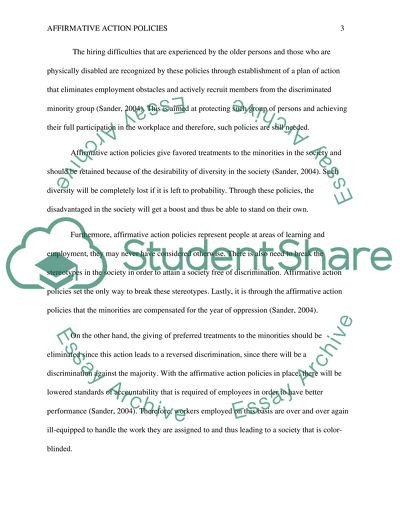 Affirmative Action Policies Affirmative action policies are the positive dealings that are undertaken with a lot of certainty and conscientiousness by organizations in an attempt to overcome past challenges, practices and barriers to one and the same employment opportunities (Schmidt, 2008). This aims at achieving full and fair participation of all members of the society, who were initially not fully utilized in the work place, and negatively impacted by the policies (Schmidt, 2008).
According to Schmidt (2008), equal opportunities in employment give a guide on employment of individuals with no consideration of race, sex, color, national origin, religious creed, ancestry, marital status, mental disability, sexual orientation, age, physical disability or learning disability (Schmidt, 2008). Therefore, organizations will not demand for genetic information from its employees or job applicants.
The demand for such information leads to discrimination against the person on the foundation of hereditary information in an employment situation (Schmidt, 2008). Furthermore, anyone with a previous criminal conviction will not be discriminated or aligned with the crime in employment conditions. It is therefore, the goal and purpose of action policies to ensure equal opportunities to all.
Organizational policies, which entail employment applications, job specifications, job structuring, job qualifications, recruitment practices, counseling, grievances procedures, layoffs and terminations should be undertaken without discrimination of any form (Sander, 2004). In order to ensure that there is no discrimination; affirmative action policies will help monitor the whole process.
The hiring difficulties that are experienced by the older persons and those who are physically disabled are recognized by these policies through establishment of a plan of action that eliminates employment obstacles and actively recruit members from the discriminated minority group (Sander, 2004). This is aimed at protecting such group of persons and achieving their full participation in the workplace and therefore, such policies are still needed.
Affirmative action policies give favored treatments to the minorities in the society and should be retained because of the desirability of diversity in the society (Sander, 2004). Such diversity will be completely lost if it is left to probability. Through these policies, the disadvantaged in the society will get a boost and thus be able to stand on their own.
Furthermore, affirmative action policies represent people at areas of learning and employment, they may never have considered otherwise. There is also need to break the stereotypes in the society in order to attain a society free of discrimination. Affirmative action policies set the only way to break these stereotypes. Lastly, it is through the affirmative action policies that the minorities are compensated for the year of oppression (Sander, 2004).
On the other hand, the giving of preferred treatments to the minorities should be eliminated since this action leads to a reversed discrimination, since there will be a discrimination against the majority. With the affirmative action policies in place, there will be lowered standards of accountability that is required of employees in order to have better performance (Sander, 2004). Therefore, workers employed on this basis are over and over again ill-equipped to handle the work they are assigned to and thus leading to a society that is color-blinded.
Furthermore the saying that the minorities need an affirmative action in order for them to succeed is so condescending to them. Affirmative action policies have weaknesses in the sense that once enacted, they become tough to remove even when the fundamental discrimination is removed (Sander, 2004).
References
Sander, R. (2004). A Systemic Analysis of Affirmative Action in American Law Schools. Stanford
Law Review : 367–484.
Schmidt, P. (2008). Scholars Mount Sweeping Effort to Measure Affirmative Action in Higher Education. Chronicle of Higher Education, 54 (19): A19 Read More
Share:
Tags
Cite this document
(“Law - Affirmative Action Policies Essay Example | Topics and Well Written Essays - 500 words”, n.d.)
Retrieved from https://studentshare.org/miscellaneous/1591601-law-affirmative-action-policies

...that could use to earn a living2. As a result, the victorious General T. Sherman set forth a proposal that was to divide the land and goods of the Southeastern Georgia into sizeable proportions and give the freed family 40 acres of land and a mule in order to begin their lives3. This move attracted a huge level of opposition from the sitting clergy. However, almost a century later, this issue of affirmative action has come back to haunt opponents of this policy. Today, the lawful society of the United States recognizes the idea of assisting individuals of minority decency to gain access to American goods. This came via a series of political initiatives and court...
8 Pages(2000 words)Essay

...﻿Affirmative action and Diversity policies This is a response to various questions in response to affirmative action and diversity action. It offers the description that cultural diversity is a notion that acknowledges the existence of differences between people of different cultures and suggests that the treatment of these people with inclusivity. It also suggests that diversity serves to assure social responsibility and foster innovativeness. Affirmative action is aimed at addressing various disparities, including those that touch on social differences, economic development and political representation,...
5 Pages(1250 words)Assignment

...Affirmative Action Policies 2009 Affirmative Action Policies Introduction The issue of interracial relations has always been probably the most controversial and difficult social problems of American society. For much of the last century, racial, gender, ethnic, and religious minorities have been facing legal exclusion and unequal treatment. Representatives of minorities and women were segregated into low paid and less perspective jobs, while some minorities - for example Chinese or Korean, were legally forbidden to own land. Until the second decade of the last century, even white women were legally deprived of the political rights and in...
7 Pages(1750 words)Essay

...Define the current of affirmative action policies and laws in the context of higher education, employment and government contracts. For quite some time now, certain ethnic and minority groups have been pushing for better rights when it comes to higher education, employment, and government contracts. This has resulted in preferential hiring, college admissions and the allocation of government contracts when it comes to women and minority groups. It also applies to the awarding of other social benefits for these groups. The problem is that some people consider it to be reverse discrimination (Bardach, 2005; Holzer and Neumark, 2000 and Holzer and Neumark, 2006). The...
8 Pages(2000 words)Essay

.... Based upon the information that is available with the Bureau of Justice Statistics, the racial tint in criminal activity is clear since the rate of imprisonment of black people in 1994 was 1489 as against 176 white people and 686 Hispanics. Comparatively, Blacks are 8.5 times more likely to go to prison than white people are (www.unix.oit.umass.edu, n.d.). Unless and until the interests of all racial minorities are represented through affirmative action at the workplace in hiring a diverse group of police officers belonging to different ethnic groups, the cause of justice may not be served. When law enforcement officials are predominantly those who belong to the majority community, then there is a danger of bias and prejudice... with the...
5 Pages(1250 words)Dissertation

...recently, after being denied admission in 1996 to the University of Michigan’s law school, Barbara Grutter sued. The case went to the Supreme Court, and in its first ruling on affirmative action in twenty-five years, ruled 5-4 to uphold Michigan’s affirmative action policy and decided 6-3 against the undergraduate policy, ruling that it constituted the use of quotas (npr.org). This leaves a big question: “The colleges can still look for diversity in their entering classes, but the question is how do they look to that?" (cnn.com). The courts left the acceptable means by which to promote racial diversity vague, only...
4 Pages(1000 words)Research Proposal
sponsored ads
Save Your Time for More Important Things
Let us write or edit the essay on your topic "Law - Affirmative Action Policies" with a personal 20% discount.
GRAB THE BEST PAPER

Let us find you another Essay on topic Law - Affirmative Action Policies for FREE!