Comments (0)
Add to wishlistDelete from wishlist
Cite this document
Summary
She earned her nursing degree from Pottstown, Pennsylvania Hospital School of Nursing in 1931. Afterward, she worked as an operating room supervisor at Pottstown Hospital. Later, she received a…
Download full paperFile format: .doc, available for editing
HIDE THIS PAPERGRAB THE BEST PAPER94.8% of users find it useful 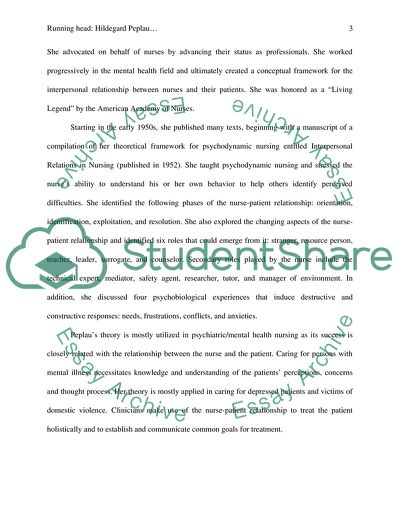 Hildegard Peplau In APA Style Hildegard Peplau was born in Reading, Pennsylvania on the 1st of September, 1909. She earned her nursing degree from Pottstown, Pennsylvania Hospital School of Nursing in 1931. Afterward, she worked as an operating room supervisor at Pottstown Hospital. Later, she received a Bachelor of Arts in Interpersonal Psychology from Bennington College, Vermont in 1943; a Master of Arts in Psychiatric Nursing from Teachers College, Columbia, New York in 1947; and a Doctor of Education in Curriculum Development from Columbia in 1953.
During World War II, she became a member of the Army Nurse Corps and worked in a neuropsychiatric hospital in London, England. She also did work at Bellevue and Chestnut Lodge Psychiatric Facilities and was in contact with renowned psychiatrists Freida Fromm-Richman and Harry Stack Sullivan.
From the beginning of her career in the late 1930s, Peplau worked tirelessly to advance nursing education and practice. Her efforts and excellent leadership saved the American Nurses Association from bankruptcy and moved the nursing profession towards scientific recognition and respectability.
She was recognized for her numerous contributions in the nursing profession. Peplau has been considered as one of the renowned nursing leaders of her time. Her writings and research were repeatedly featured in the American Journal of Nursing from 1951 to 1960. She became a professor emeritus from Rutgers shortly after obtaining her doctorate degree. She established the first nursing post-baccalaureate program and eventually held the title of executive director and president of the American Nurses Association. She promoted professional standards and regulation through credentialing, as well as introduced the concept of advanced nursing practice. She advocated on behalf of nurses by advancing their status as professionals. She worked progressively in the mental health field and ultimately created a conceptual framework for the interpersonal relationship between nurses and their patients. She was honored as a “Living Legend” by the American Academy of Nurses.
Starting in the early 1950s, she published many texts, beginning with a manuscript of a compilation of her theoretical framework for psychodynamic nursing entitled Interpersonal Relations in Nursing (published in 1952). She taught psychodynamic nursing and stressed the nurse’s ability to understand his or her own behavior to help others identify perceived difficulties. She identified the following phases of the nurse-patient relationship: orientation, identification, exploitation, and resolution. She also explored the changing aspects of the nurse-patient relationship and identified six roles that could emerge from it: stranger, resource person, teacher, leader, surrogate, and counselor. Secondary roles played by the nurse include the technical expert, mediator, safety agent, researcher, tutor, and manager of environment. In addition, she discussed four psychobiological experiences that induce destructive and constructive responses: needs, frustrations, conflicts, and anxieties.
Peplau’s theory is mostly utilized in psychiatric/mental health nursing as its success is closely related with the relationship between the nurse and the patient. Caring for persons with mental illness necessitates knowledge and understanding of the patients’ perceptions, concerns and thought process. Her theory is mostly applied in caring for depressed patients and victims of domestic violence. Clinicians make use of the nurse-patient relationship to treat the patient holistically and to establish and communicate common goals for treatment.
The true value of nursing practice can only be accomplished by starting and strengthening the nurse-patient relationship. For the nurse to function as an educative and therapeutic force, understanding the meaning of patient experience by developing a network of communication through Peplau’s theory is therefore essential.
Sources:
Alligood, M.R. & Tomey, A.M. (2006). Nursing Theorists and Their Work (6th ed.).St. Louis, Missouri: Mosby Elsevier.
Balita, C. & Octaviano, E. (2008). Theoretical Foundations of Nursing: The Philippine Perspective. Metro Manila, Philippines: Ultimate Learning Series.
Landry, A. (2009). Hildegard Peplau: Interpersonal Relations Nursing Theorist. Historical Biographies. Retrieved from http://historicalbiographies.suite101.com/article.cfm/hildegard_peplau
Shattell, M., McAllister, S., Hogan, B. & Thomas, S. (2006). “She took the time to make sure she understood”: Mental health patients’ experiences of being understood. Archives of Psychiatric Nursing, 20 (5). Retrieved from http://www.monashattell.com/uploads/She_took_the_time_to_make_sure_she_understood_-_Mental_health_patients__experience_being_understood.pdf Read More
Share:
Tags
Cite this document
(“Hildegard Peplau Essay Example | Topics and Well Written Essays - 500 words - 1”, n.d.)
Hildegard Peplau Essay Example | Topics and Well Written Essays - 500 words - 1. Retrieved from https://studentshare.org/miscellaneous/1558658-hildegard-peplau

CHECK THESE SAMPLES OF Hildegard Peplau

...? Hildegard Von Bingen, also commonly known as St. Hildegard was born arguably in 1908 to noble parents. There had been many s attached toher such as scientist, healer, writer and of course composer. She was an influential figure during the Middle Ages, at a time when women in the church were not given much emphasis. She was dubbed by people in her time as the ‘Sibyl of the Rhine’ as they sought her advice and help for personal problems, health and spiritual issues. Barbara Newman, in the Introduction of ‘Scivias’ describes her best by saying that, “Hildegard unites vision with doctrine, science with religion, charismatic jubilation with prophetic indignation, and the longing for social...
4 Pages(1000 words)Essay

.... Eliminate body wastes. 3. Move and maintain desirable postures. 4. Sleep and rest. 5. Select suitable clothes-dress and undress. 6. Maintain body temperature within normal range by adjusting clothing and modifying environment 7. Keep the body clean and well groomed and protect the integument 8. Avoid dangers in the environment and avoid injuring others. 9. Communicate with others in expressing emotions, needs, fears, or opinions. 10. Worship according to one’s faith. 11. Work in such a way that there is a sense of accomplishment. 12. Play or contribute in various forms of recreation. 13. Learn, discover, or satisfy inquisitiveness that leads to regular growth and health, and utilize the accessible health facilities”...
8 Pages(2000 words)Research Paper

The Road to the Advancement of Professional Nursing

...? The Road to the Advancement of Professional Nursing Introduction The term psychiatrist refers to a health physician who majorly deals with diagnosis and treatment of mental diseases. Psychiatrist in positive essence is an instrumental component in the health care sector. It is important to note that in the past days the profession of psychiatric selectively belonged to men. There were no nurses in hospital playing the roles of psychiatrists. Hildegard Peplau, the mother of Psychiatric Nursing marked a very sharp turning point in the history of the world when she furthered her carrier to become the first female psychiatrist in the entire world. The events that took place in her life made her to develop...
5 Pages(1250 words)Research Paper

Relationship Between Theory and Practice

...?Relationship Between Theory & Practice Affiliation with more information about affiliation, researchgrants, conflict of interest and how to contact. Relationship Between Theory & Practice Hildegard Peplau - Theory of Interpersonal Relations: Patients in the present health scenario are addressed as consumers. Consumers are referred to someone who buys a commodity. In the similar sense, the patient visualizes himself as a consumer who purchases health services. It is for the reason that the patient has certain rights; the quality of health care delivered is always a matter of concern (Prakash, 2010). Over the last few years, the roles of nurses have climbed up the ladder helping nurses to adopt some of the...
8 Pages(2000 words)Research Paper

Peplau divided the nursing processes into phases. The model also divided the function of the nurse into five functionalities (McNaughton, 2005). This essay will analyze the nurse-patient relationship from the perspective of the interpersonal theory of nursing. This study will establish that the nurse-patient relationship is the most significant element in the determination of successful outcomes in therapy especially with regard to victims of rape. The nurse according to Peplau’s theory had six roles in the nursing process: stranger, teacher, resource person, counselor, surrogate, and leader. A nurse is a strange person in that the meeting of the patient and nurse is usually not preceded by prior contact and hence a relation...
8 Pages(2000 words)Research Paper

Compare and Contrast: Chi-Rho-lota page from the Book of Kells and The vision of Hildegard of Bingen from Scivias

...Nursing Nursing Hildegard Peplau did his BA in Interpersonal Psychology and he did his MA in Psychiatric Nursing (Publish Web Server,2012). He proposed the theory of Interpersonal Relations for the profession of nursing; this theory was created with the focus on the importance of interpersonal relationship between patient, patient’s families and nurses (Masters, 2009, p.61). According to the theory, a nurse has the task of helping patients and colleagues identify the issues experienced by them. The theory states that nurses need to apply principles related to human relations for different issues experienced by patients. The theory highlights the roles played by nurses while providing relief to patients;...
1 Pages(250 words)Assignment

...THE EVOLUTION OF NURSING AS AN INTEGRATIVE CARING PROCESS The Evolution of Nursing as an Integrative Caring Process Nursing as a profession has evolved rapidly from non-methodological caring of the ill or injured, to a field that integrates various disciplines not just to provide care for the sick but as a holistic way of keeping the public’s health in top shape (Kulbok, et al., 2012). Such way of thinking regarding nursing has been established as such due to the changes that happened in the nurse-patient relationship, which in part was the result of the early integrations of interpersonal relations theory into the field through the efforts of a nursing theory pioneer: Hildegard Peplau (McCrae, 2012)....
2 Pages(500 words)Essay

...Getting Compliance Technique Convincing people to say “Yes” is an aim to any seller. This is what is known as “compliance” by the psychologists. (Taylor, Peplau and Sears) However, my first experience was not through a psychological book but under a tree when my father showed me something astonishing using a stick and some few red feathers. This was decades ago when playing. One day, he gave me a long stick that has red feathers clumped with an adhesive tape at one end. “Come I ostentation something to you” he claimed in his mischievous familiar, in his eyes. I realized then that it was going to be fun. A family of robins had nested in a nearby tree near his rest shed. We stealthily walked to just beneath the tree and...
1 Pages(250 words)Essay
sponsored ads
Save Your Time for More Important Things
Let us write or edit the essay on your topic "Hildegard Peplau" with a personal 20% discount.
GRAB THE BEST PAPER

Let us find you another Essay on topic Hildegard Peplau for FREE!