Comments (0)
Add to wishlistDelete from wishlist
Cite this document
Summary
As requested, the HR manager has prepared a report that examines the effect of implementing 5 days unpaid PETernity leave in terms of employees’ performance, absenteeism, decision to stay longer with the company, and attracting new employees. The purpose of this report is to…
Download full paperFile format: .doc, available for editing
HIDE THIS PAPERGRAB THE BEST PAPER95.5% of users find it useful 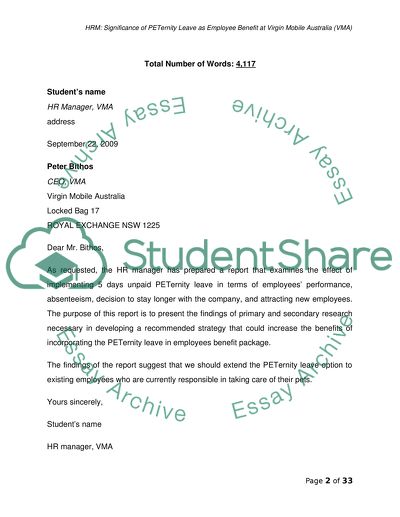 Download file to see previous pages Although there has been quite a lot of negative feedbacks with regards to PETernity leave in other countries, it remains a fact that the benefits of implementing five days unpaid leave to VMA employees who wishes to adopt a new dog or cat less than 10 months old.
There are many people who would give extra time and care for their pets. In line with this, VMA HR manager should take advantage of this sentiment in order to keep more employees feel more accepted and motivated to work better and stay longer with the company. Likewise, HR manager can make use of this option as a way of attracting new employees other than the typical HR strategies like offering of flexible working approach like part-time job, flexy time at work, job sharing, unpaid leaves, and industry pay standards.
Since VMA’s PETernity leave does not apply to employees with pets more than 10 months old, the HR manager is adviced to improve this HR policy by extending the PETernity leave benefits to its employees who have pets like dogs and cats regardless of the pets’ age, breed, and gender.
Established back in October 2000, Virgin Mobile Australia (VMA) is a telecommunications company that offers a wide-range of mobile communication products and services including the access to mobile broadband through its 3,500 retail store outlets nationwide (Virgin Mobile, 2009a; van der Walt, Morris, & Simsek, 2007). As of 2008, VMA was considered the 4th telecommunication company in Australia that was given the authority to sell Apple iPhone 3G (MacBlogz, 2008).
Serving more than 400,000 customers in Australia (van der Walt, Morris, & Simsek, 2007), the company is challenged to improve and maintain the quality service that is given to its customers. Because of the continuous business expansion and tight market competition within the telecommunication industry, the HR manager of VMA should continuously improve the employment benefit packages not only to attract competitive ...Download file to see next pagesRead More
Share:
Tags
Cite this document
(“Human Resources Management Essay Example | Topics and Well Written Essays - 3750 words - 1”, n.d.)
Human Resources Management Essay Example | Topics and Well Written Essays - 3750 words - 1. Retrieved from https://studentshare.org/miscellaneous/1557346-human-resources-management

The new system of regulation for fraud-free corporate reporting has been put to operate as per the Sarbanes-Oxley Act which was passed in 2002 against corporate financial reporters such as self-regulating accountants and organizational accounting departments. Sarbanes-Oxley Act is implementing some of the guidelines under the authorities of Congress and other accounting institutions. But it seems that Sarbanes-Oxley Act, together with other bodies such as Public Company Accounting Oversight Board (PCAOC), Securities and Exchange Commission (SEC), etc are unable to provide justifications for the stoppage of such unscrupulous activities (Engel, Hayes, & Wang, 2005). It had been observed that organizations may somehow avert futur...
6 Pages(1500 words)Coursework
sponsored ads
Save Your Time for More Important Things
Let us write or edit the essay on your topic "Human Resources Management" with a personal 20% discount.
GRAB THE BEST PAPER

Let us find you another Essay on topic Human Resources Management for FREE!