Comments (0)
Add to wishlistDelete from wishlist
Cite this document
Summary
There are two types of educational processes namely psychological and sociological. Neither of them can be neglected as they are both…
Download full paperFile format: .doc, available for editing
HIDE THIS PAPERGRAB THE BEST PAPER96.8% of users find it useful 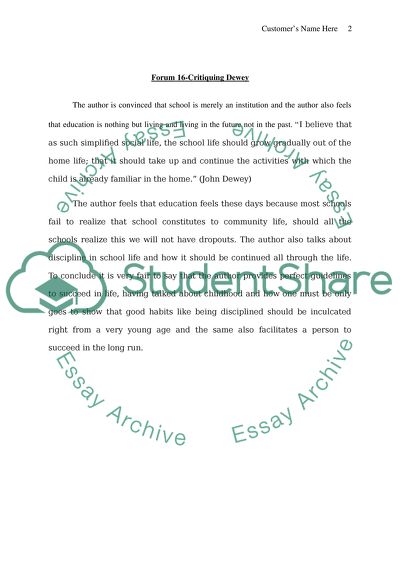 s 4 August 2009 Forum 15-A Modern Dewey Educational process is pivotal in the growth of children and it also forms the character of children hence it become all the more important. There are two types of educational processes namely psychological and sociological. Neither of them can be neglected as they are both extremely important in the growth of children. Even if the results of these two processes are initially bad one must not stop using them, diligence plays a key role and one must continue making use of these procedures. The instincts of a child are very important and everything depends on the instincts of a child be it education or for that matter any other important thing. The instincts of a child should be well noticed and taken to the past in order to evaluate them and this process is very important because the instincts of a child decide more things than one. The focus of the parents must be on the psychological as well as the social side because both these sides demand attention and neither one can be neglected.
“In sum, I believe that the individual who is to be educated is a social individual and that society is an organic union of individuals. If we eliminate the social factor from the child we are left only with an abstraction; if we eliminate the individual factor from society, we are left only with an inert and lifeless mass. Education, therefore, must begin with a psychological insight into the childs capacities, interests, and habits. It must be controlled at every point by reference to these same considerations.” (John Dewey)
Forum 16-Critiquing Dewey
The author is convinced that school is merely an institution and the author also feels that education is nothing but living and living in the future not in the past. “I believe that as such simplified social life, the school life should grow gradually out of the home life; that it should take up and continue the activities with which the child is already familiar in the home.” (John Dewey)
The author feels that education feels these days because most schools fail to realize that school constitutes to community life, should all the schools realize this we will not have dropouts. The author also talks about discipline in school life and how it should be continued all through the life. To conclude it is very fair to say that the author provides perfect guidelines to succeed in life, having talked about childhood and how one must be only goes to show that good habits like being disciplined should be inculcated right from a very young age and the same also facilitates a person to succeed in the long run.
Works Cited
Dewey, John (1897) My pedagogic creed, The School Journal, Volume LIV, Number 3 (January 16, 1897), pages 77-80. Also available in the informal education archives, http://www.infed.org/archives/e-texts/e-dew-pc.htm. Read More
Share:
Tags
Cite this document
(“Two One page orders for a discussion post - not a paper just to be Essay - 2”, n.d.)
Retrieved from https://studentshare.org/miscellaneous/1556719-two-one-page-orders-for-a-discussion-post-not-a-paper-just-to-be-done-as-a-discussion-board-post

(Two One Page Orders for a Discussion Post - Not a Paper Just to Be Essay - 2)
https://studentshare.org/miscellaneous/1556719-two-one-page-orders-for-a-discussion-post-not-a-paper-just-to-be-done-as-a-discussion-board-post.

“Two One Page Orders for a Discussion Post - Not a Paper Just to Be Essay - 2”, n.d. https://studentshare.org/miscellaneous/1556719-two-one-page-orders-for-a-discussion-post-not-a-paper-just-to-be-done-as-a-discussion-board-post.
Comments (0)
Click to create a comment or rate a document

... of the world to develop his Theory of Forms. Another important aspect of Plato’s ideas revolve around his realization that an unhappy man cannot make an effective ruler because he is continually struggling to find what will make him happy rather than being concerned with the welfare of the state, thereby helping define what he means when he mentions ethics. Further evidence of Socrates’ influence can be seen in Plato’s idea that only the unjust are unhappy, so to be happy (to achieve the greatest good), one must first be just, which requires a developed sense of ethics. Plato attempts to define the term “justice” in his first chapter of The Republic. This is done by repeating the discussion held by Socrates and several others regarding...
12 Pages(3000 words)Case Study

Erving Goffman was an astute observer of society, who immersed himself in the social environment which he was studying. He carefully observed and recorded the ways in which people’s behavior and interpersonal interactions are carried out in everyday life. He notes that “people perform their social roles and, as they do so, they produce social order through their actions and the regu...
6 Pages(1500 words)Article
sponsored ads
Save Your Time for More Important Things
Let us write or edit the essay on your topic "Two One page orders for a discussion post - not a paper just to be done as a discussion board post" with a personal 20% discount.
GRAB THE BEST PAPER

Let us find you another Essay on topic Two One page orders for a discussion post - not a paper just to be done as a discussion board post for FREE!