'To many outside Europe and North America, globalization looks like Westernalization'. Is this the case in cultural terms - Essay Example

Comments (0)
Add to wishlistDelete from wishlist
Cite this document
Summary
Today, a Big Mac is as ubiquitous in Birmingham as it is in Beijing. Yes, you can supersize your fries in Montana, Montreal or even Moscow as the Cold War has melted and American cultural supremacy has made in-roads…
Download full paperFile format: .doc, available for editing
HIDE THIS PAPERGRAB THE BEST PAPER93.9% of users find it useful 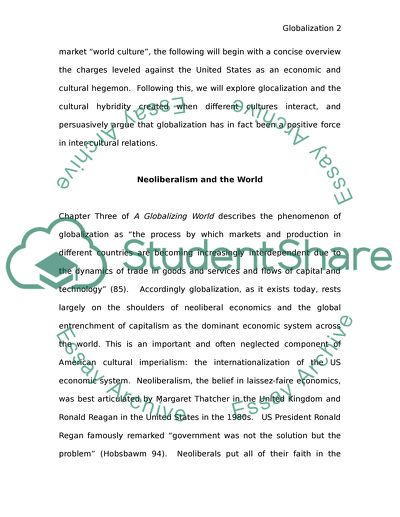 Extract of sample "'To many outside Europe and North America, globalization looks like Westernalization'. Is this the case in cultural terms"

Download file to see previous pages From a historical standpoint, what made this possible and is this a positive thing for the rest of the world? Why for many people is American culture still a problem? Seeking to address these questions and many more with respect to perceptions of American cultural hegemony and the world today, this essay will provide an in-depth exploration of American culture and the globalization phenomenon today.
According to Kelly and Prokhovnik, “although the globalization of culture seems in some ways obvious in our daily lives, it is not an entirely straightforward matter. Culture is a complicated and pervasive phenomenon, taking many forms.” (48) Addressing charges of cultural imperialism and the role of the United States in cultivating a mass market “world culture”, the following will begin with a concise overview the charges leveled against the United States as an economic and cultural hegemon. Following this, we will explore glocalization and the cultural hybridity created when different cultures interact, and persuasively argue that globalization has in fact been a positive force in inter-cultural relations.
Chapter Three of A Globalizing World describes the phenomenon of globalization as “the process by which markets and production in different countries are becoming increasingly interdependent due to the dynamics of trade in goods and services and flows of capital and technology” (85). Accordingly globalization, as it exists today, rests largely on the shoulders of neoliberal economics and the global entrenchment of capitalism as the dominant economic system across the world. This is an important and often neglected component of American cultural imperialism: the internationalization of the US economic system. Neoliberalism, the belief in laissez-faire economics, was best articulated by Margaret Thatcher in the United Kingdom and Ronald Reagan in the United States in the 1980s. US ...Download file to see next pagesRead More
Share:
Tags
Cite this document
(“'To many outside Europe and North America, globalization looks like Essay”, n.d.)
Retrieved from https://studentshare.org/miscellaneous/1556292-to-many-outside-europe-and-north-america-globalization-looks-like-westernalization-is-this-the-case-in-cultural-terms

CHECK THESE SAMPLES OF 'To many outside Europe and North America, globalization looks like Westernalization'. Is this the case in cultural terms

The Medieval Europe: Christina of Markyate and Margery Kempe

Born in 1373, Margery Kempe is considered as the author of the earliest surviving autobiographical writing in English and her book dates back to 1433. It narrates the story of her spiritual voyage and the hurdles created by her husband and the society in this journey of the soul. She perceived the world to be critical and hostile and she thought she was sustained by the spiritual conversations that she undertook with the Lord (Windeatt, 12).

The threat of sexual violence and social violence that she met with was in one sense her source of strength also. Because a truly divine person was, according to her vision, the one who underwent maximum adversities and torture which she always considered as God testing her. To come...
8 Pages(2000 words)Essay

This paper briefly explains the importance of Europe and India in the current world and the mutual economic cooperation between these two regions.
I have used only secondary sources for conducting this research. I have taken ideas from reputed electronic references like JSTOR, Wall Street Journal, BusinessWeek, etc and also from articles written by many reputed authors like Dr. Singh, Gupta, Gabriel Rozman, etc. I tried to find similar arguments in these articles in order to strengthen the claims presented in this paper. Moreover, I tried to explore diverse areas of cooperation between Europe and India in order to write a multifaceted article. I tried to analyze and interpret the ideas taken from the references meaningfully i...
6 Pages(1500 words)Research Proposal

To ensure that the education sector is diversified it is seen that in the United States of America many such policies have been implemented. In 1970s diversity was considered an important tool by the educational experts so that they could help students understand each other. The board of education of North Carolina then formulated a scheme for students through which they could practice a diversity of races in schools. This was known as the North Carolina Wake County Busing Policy which was functional till the late twenty-first century. It was now in July 2010 that the issue was raised again by the educational board members who then decided to scrap the policy of diversity with community-based schools. (Liane Membis 2010; Stacy Tei...
7 Pages(1750 words)Case Study

However, it may not necessarily enjoy the status of an official language. American English has evolved over centuries but it was after the American Revolution that distinct alterations were made to it to reflect national and political independence from the British. Noah Webster is regarded as the founding father of the American English who realized the need for standardization of the language and worth of linguistic identity (Language Translation Inc., 2006).
According to surveys, English is considered as the official language in fifty-one countries and in twenty-seven states of America. Statistics show that it is the mother language of 82% of the population in the United States of America and almost 96% can actually speak it...
6 Pages(1500 words)Essay
sponsored ads
Save Your Time for More Important Things
Let us write or edit the essay on your topic "'To many outside Europe and North America, globalization looks like Westernalization'. Is this the case in cultural terms" with a personal 20% discount.
GRAB THE BEST PAPER

Let us find you another Essay on topic 'To many outside Europe and North America, globalization looks like Westernalization'. Is this the case in cultural terms for FREE!